Wheelchairs carry amputees from Gaza to the world of basketball 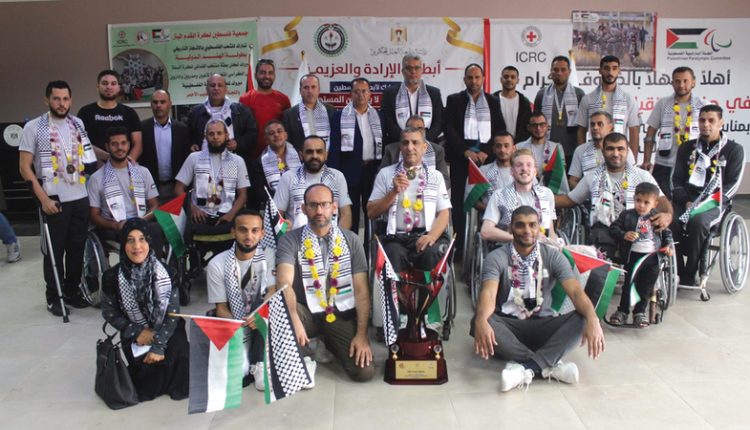 Their amputated limbs did not prevent them from striving forward to represent their occupied homeland in various parts of the world, despite what it suffers from a long Israeli occupation and an abhorrent internal division. The Palestinian wheelchair basketball team achieved a record that healthy people could not, as the borders of geography and the blockade could not hinder them. , to pass it all the way to East Asia, and to participate in the International Wheelchair Basketball Championship in India.

Amputated limbs arrived in Indian lands and their determination was fueled by the will to win and nothing else, which enabled them to overtake all the participating international teams, so that the host Indian team would be the gateway to victory for the Palestinian “guerrillas”, winning the gold medal, and ascending to the throne of the world.

After achieving victory over several Asian teams over the course of five consecutive days, during which they won the gold medal in the international championship, the Palestinian national team players returned to Gaza on Monday, November 14, with a valuable victory. The name of Palestine soared high among the races and races of the earth.

At the gate of the Rafah land crossing separating the Gaza Strip and the Arab Republic of Egypt, the Palestinian team received a national honor befitting the global achievement, of which they were the champions. They were received by the Palestinian Paralympic Committee that supervises games for people with special needs, especially sports, the Supreme Council for Youth and Sports in Palestine, and Lviv. of Palestinian athletes.

Vice-Chairman of the Paralympic Committee in Palestine, Kamel Abu Al-Hassan, assures Emirates Today that the title achieved by the Palestinian wheelchair basketball team is a record, the first of its kind, and a rare precedent for Palestinian sports.

He points out that the Palestinian team achieved a historic achievement in India, sponsored by the International Committee of the Red Cross, and it is the first team championship won by a Palestinian team with disabilities throughout history.

Abu Al-Hassan continues to say: “Despite achieving dozens of individual titles at the level of the Palestinian Olympic Games, whether Arab or international, the wheelchair basketball team won a championship gold that a Palestinian team with special needs had never achieved before.”

The wheelchair basketball team participated in its first Arab championship in 2019, which took place on Lebanese soil, during which it won third place.

The will to win

Returning to the international championship race in India, the players of the Palestinian national team competed for the first golden title, like a fighter on a war field, to achieve victory, and their wheelchairs overcome the internal political division, and the lack of the necessary capabilities within their besieged city from land and sea, as well as the air.

The joy of the Palestinian team after the victory over the Indian team embodied the will to win that they had throughout the days of the international tournament.

The player, Mohammed Ajour, who was greeted by his parents with “ulturations” and flowers at the Rafah land crossing, confirms during his interview with “Emirates Today” that his team played the matches in a competitive spirit, in order to reach the final match, to achieve a record for their Palestinian sport, adding, “In the face of India we played Ajour goes on to say: “In the final match, we performed admirably in the first appearance of our team in an international tournament, outside the borders of the besieged sector, and we were able to win the match a few moments before the end of its original time. Let us reach the podium and be on the throne of historical achievements, after defeating the Indian team with a score of 49 points, compared to 44 points.

Ajour points out that the number of teams participating in the international tournament is eight, representing several countries from the Asian continent.

The Palestinian team qualified as runner-up for its group to the golden square of the tournament, to pass its counterpart the Libyan team in the semi-finals of the tournament, and beat it with a broad score of (56) points, compared to (40) points.

The Palestinian national team faced many challenges before participating in the international tournament and leaving the Gaza Strip for India, most notably its inability to set up an external training camp, according to the Palestinian wheelchair basketball player, Muhammad al-Dahliz.

The Palestinian player says, “We in the national team relied on local training to develop our expertise for four consecutive months, which gave us great confidence in our abilities, to achieve the first international victory.”

Al-Dahleez continues, “The Israeli blockade imposed on the residents of Gaza impeded our travel process, as the players stayed for several days waiting for their departure through the crossings abroad. Our journey began on the second of November, and we will reach India after three days.”

• “We relied in the national team on local training to develop our expertise, for four consecutive months, which gave us great confidence in our abilities, to achieve the first international victory.”

• “The wheelchair basketball team won a championship gold that a Palestinian team with special needs has never achieved before.”

Lavrov: US and Russian intelligence are in contact about a possible prisoner exchange