War in Ukraine could spark rivalry for Putin’s succession 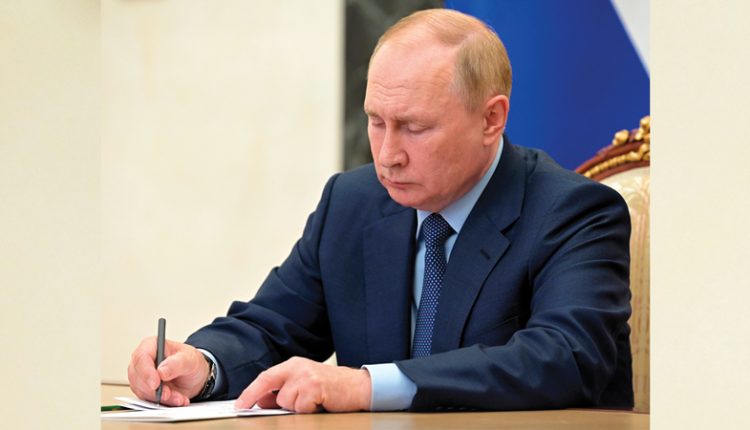 The writer and researcher at the Carnegie Endowment for International Peace, Andrei Bertsev, argues that the war in Ukraine and the resulting sanctions did not strengthen the authority of Russia’s leadership or unify influential political and economic groups in the country. Had President Vladimir Putin achieved the quick victory, on which he apparently counted when he launched his “special operation”, he would have cemented his position as ruler, but as the war drags on, elites are forced to think about their future and try to find their place in it. Putin himself shows no intention of relinquishing power, but he seems increasingly drawn to the past. Elites and his potential successors watch his every military impulse, but they can already see that it has no place in their post-war vision of the future. His only remaining role in their conception of the new era of peace will be to nominate a successor and leave the scene of events.

Bertsev says, in a report published by the Carnegie Endowment for International Peace website, that the war has therefore set in motion a public race for candidates. In recent years, Russia’s political maneuvering has been under wraps, but in the new era loud rhetoric and crystal-clear political initiatives have once again become the norm.

The current situation looks as if there is already an active election campaign, with bureaucrats and officials within the ruling party doing everything they can to appear in the spotlight, even attacking each other. and until recently; It was almost impossible to think that there could be such an action: the presidential administration operates in silence, while senior officials of the ruling United Russia party have confined themselves to making promises of social policy.

In particular, the former President, former Prime Minister, and Vice-President of the Security Council, Dmitry Medvedev, was busy making statements. His overly hard-line statements on foreign policy issues and insults to Western leaders often seem comical, but the role he is trying to play is clear. He stresses that internal troubles are caused by external enemies.

Another politician making loud hints for the first time is the First Vice President of Presidential Affairs and organizer of the Kremlin’s political bloc, Sergei Krinko, who is now charged with overseeing the separate republics of Donbass. He has become one of the most prominent politicians of the new era, although previously – since becoming a presidential envoy at the turn of the century – he has never shown any penchant for the spotlight.

Today, Krinko wears khakis and speaks out loud about fascists, Nazis, and the unique mission of the Russian people. He has come to the fore in public events, clearly confirming his position as the coordinator behind the self-proclaimed Donetsk and Luhansk People’s Republics, something that his predecessors had not done before. Although Krinko was not directly involved in the military campaign, he clearly managed to make a name for himself with Putin.

Another candidate in the hawks’ battle is the Duma Speaker, Vyacheslav Voldin. Since his transition from the Kremlin (as first deputy head of the Presidential Office) to the State Duma, Voldin has intensified his public presence, making many provocative statements, which are guaranteed to be useful stings. Now he is redoubling his efforts, supporting a ban on the use of foreign words on storefronts and his call for the death penalty to be retained in the two modern republics.

Other prominent officials adopted a completely different strategy, choosing to stay as far as possible from the “special operation” issue. This silence in itself is a political gesture. Prime Minister Mikhail Mishustin and Moscow Mayor Sergei Sobyanin, both considered contenders to succeed Putin before the war, were silent on the “special operation” in Ukraine. Their rationale for their silence is that war is temporary, and that relations with the West and even Ukraine will have to be restored sometime and somehow. And when that time comes, those who have not insulted the “enemy states”, and who have not directly participated in the military campaign, will be in a better position to deal with the new circumstances. Still, Bertsev says, there are risks to staying silent. If Putin ultimately demands the full commitment of all officials regarding Donbass and the military operation, the fact that they remain silent will not be in their favour.

The two strategies – loud initiatives and deafening silence – reflect the different attitudes and assumptions of those who pursue them. The hawks act on the premise that Putin will choose his successor, so they imitate his behavior in their attempts to win his favor. Those who remain silent rely on a different succession scenario, which is the elites electing Putin’s successor.

In any case, the 2022 vision of the succession race is of course hypothetical. Putin has not announced the beginning of such a process, and it is clear that he does not intend to leave office, and the presidency is preparing for elections in 2024, and it is clear who will have the central role. War and the prospect of annexing more territory would prevent Putin from presenting a program of any kind. He wants to participate in the elections as the man who defeated the Nazis (regardless of the actual results of the war), and as a historical figure who does not need to make any promises to his people.

Concluding his report, Bertsev says that the apparent interest in the succession race on the part of most senior elites – not to mention the enthusiasm of its participants – nevertheless shows that the regime wants to discuss and (see) a post-Putin future. But whatever that future looks like, Putin’s chance of it seems slim.

The 2022 vision for the succession race is, of course, hypothetical; Putin has not announced the beginning of such a process, and it is clear that he does not intend to leave office, and the presidential administration is preparing for elections in 2024, and it is clear who will have the central role.

In recent years Russia’s political maneuvering has been done in the dark, but in the new era loud rhetoric and crystal-clear political initiatives have once again become the norm.