Volunteers provide “warm spaces” for the needy in Britain 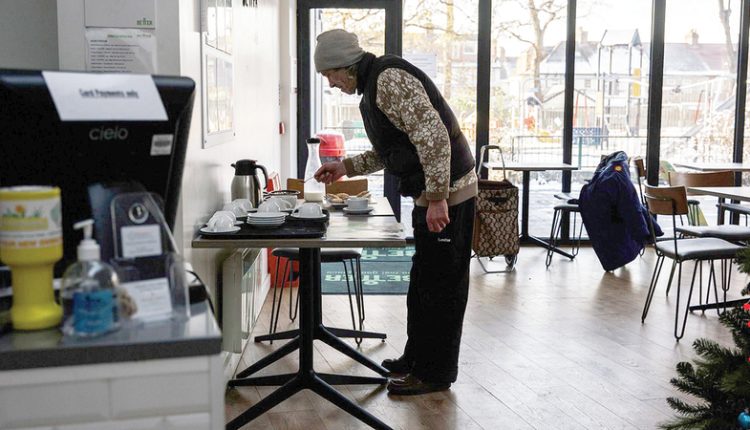 Muff Potts says there are many ways to help people get out of the cold and live in a warm public space. And the founder of the “Comrados” movement, a social movement that has opened “public living rooms” in local communities, throughout the United Kingdom, since 2015, adds that the key is “making sure that they feel welcome and not judged,” explaining, “What attracts people is that they Not a church. It is not a charitable institution, there is no reform, and there are no answers to questions.”

This winter, warm public facilities, or “warm spaces,” as they are called, are in high demand to remove any stigma. As the cold set in with the war in Ukraine, markets shook and energy prices soared. And while the UK’s Health Security Agency encourages people to heat homes to at least 18C, more than three million low-income households cannot afford this advice. According to an analysis by Joseph Rowntree, some 710,000 families across the UK cannot afford warm clothing, heating and food, with nearly 2.5 million households – a fifth of all low-income families – without food and heat.

With energy prices at record highs and energy costs nearly double what they were last year, warm spaces are popping up across the country. To avoid any possible stigma, they are presented as common spaces where people can come to chat; Instead of charitable offers for warmth or food. While the main reason someone would go into a warm space or common living room is probably for the warmth, it’s the spirit of camaraderie and conversation that keeps people there.

Britain’s poor are facing the worst winter in living memory, former Prime Minister Gordon Brown wrote on Twitter in December. “A year ago we talked about people having to choose between heating and eating, and now many people can’t afford either,” he said. He pointed out that two-thirds of the country will suffer from “fuel poverty” by April, which includes 70% of retirees and 96% of single-parent families with two or more children.

In October, the UK raised the energy price cap, the maximum rate a supplier can charge for its tariffs, by 80%, and gas prices rose to record highs in the wake of the Russian war in Ukraine, along with inflation, by more than 10% and rising oil prices. Interest and rent costs are at an all-time high. Many Britons are struggling to afford the basics. The NEA, a charity that tracks fuel and energy-efficiency poverty, estimates there are already 6.7 million households living in fuel poverty, and with bills approaching Up from twice as much as last winter, 2.4 million people have used credit cards or borrowed money to pay them this year.

And if a Briton is struggling to pay to heat his home, he really only has three options, says Matt Copeland. which could have a significant impact.”

Research indicates that more people die at home due to the cold than those who die from the short and long term effects of alcohol, Parkinson’s disease, or traffic accidents.

“We know families who have prepaid meters and can’t afford the extra expenses at all,” Copeland says. “They go days, weeks, sometimes months without access to power. This is really the worst situation, but unfortunately, it is becoming more common.”

However, communities can thrive where governments fail. “Public living rooms are now being created as models of warm spaces, all over the UK,” says Potts of Camrados founder, “after nearly 30 years working with marginalized people. I do not believe that the solution lies in the civil service provided by the government, as governments may come for a period of four years, and ministers may continue for some time, and their ideas are temporary and political. And what we need are ideas that last longer than that. And these ideas come from the communities themselves.”

As in a North Yorkshire bakery, a toy café and ‘cultural’ shop in Ipswich, a vegetarian restaurant in Tonbridge, Wales, warm spaces emerge across Britain, in every way, through a community effort started individually, from the grassroots, without a central regulator. In addition to community halls and churches, hotels, hairdressers and cricket clubs are open to anyone who needs some warmth, some company or even a hot drink. Even the famous football club Manchester United has participated in the event, and it offers the club’s stadium, “Old Trafford”, as a free “warm space”, as its restaurant, “Red Café”, opens its doors on Monday and Wednesday evenings “to help those who are facing the difficulty of winter.”

The energy crisis is hitting household budgets harder in the UK than in any country in Western Europe, according to an analysis by the International Monetary Fund. The difference between the cost burden on poor and rich households is also more disproportionate in the UK than in other countries. The reason is Britain’s heavy reliance on gas to heat homes and produce electricity at a time when the Russian war in Ukraine has led to higher gas prices. In addition, the UK has the least energy efficient homes in Western Europe. The rise in the energy bill also leads to a rise in the costs of other commodities, as shopkeepers prefer to raise prices. These indirect effects will result in more money being spent by British households. The IMF analysis takes into account people reducing their energy use as prices rise.

• Research indicates that more people die at home because of the cold than those who die from the influence of alcohol, Parkinson’s disease or traffic accidents.

More than half of the 355 councils in England and Wales are setting up or supporting groups to open warm spaces. In that, Brighton & Hove City Council Chairman William McCafferty says, “What we have in Brighton & Hove is a tremendous community mentality among the residents, and despite the stark reality that the residents are facing this winter, people have merged together and really helped each other to solve the problem.” Some serious problems. Cafferty pointed to the availability of more than 40 warm spaces for the public throughout the city of Brighton & Hove, and said, “Without the goodwill, solidarity and ambition of the community in all this, we would not have achieved what we have come to.”

This nationwide response to the energy crisis is unique in terms of the amount of community effort. The effort to create warm spaces was not led by the government or local councils, nor was it the work of any one organization. When the need became apparent, volunteers stepped in first, then organizations. Then local councils later.

Public and private funds fund the Warm Spaces initiative, to ensure that the most vulnerable – especially children and the elderly – are not forced to sit in unheated homes during the winter months. Many places offer free or reduced-price drinks, and many offer plans to organize activities for visitors who may They face isolation in addition to the cold.

Camrados’ founder, Mav Butts, says his organization’s efforts are very popular in towns that get little help and are often seen as hopeless. Comrados’ open living rooms, which have become so popular, tend to be places where people expect to be on their own. “The Warm Spaces campaign is exactly that,” Potts says.

The British are facing a harsh winter this year. archival