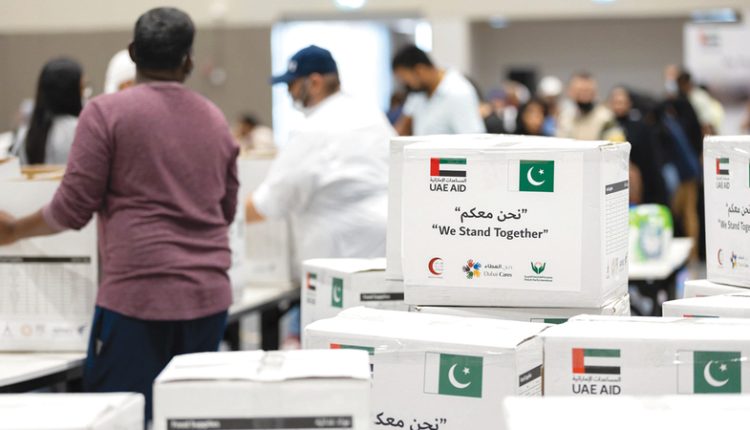 Consultation, joint coordination and deep-rooted historical relations are the title of the relationship between the UAE and the Islamic Republic of Pakistan, and the two countries are always keen to strengthen their strategic partnership, especially in the economic, trade and cultural fields, and to develop joint projects.

The Prime Minister of Pakistan, Shahbaz Sharif, paid a visit to the United Arab Emirates on January 12-13, at the invitation of His Highness Sheikh Mohammed bin Zayed Al Nahyan, President of the State, and this is his third visit to the Emirates since he took office.

On the occasion of the visit, a joint statement was issued between the two countries, detailing the meeting held by His Highness Sheikh Mohammed bin Zayed Al Nahyan with the Prime Minister of Pakistan, which discussed strengthening bilateral relations, during which views were exchanged on political and security issues in the region, and they discussed strengthening cooperation in the fields. political, defence, economic, trade and cultural development, joint projects development, as well as enhancing cooperation in the human resources sector.

During the meeting, the Pakistani Prime Minister thanked His Highness Sheikh Mohammed bin Zayed Al Nahyan for the support provided by the UAE to his country during the recent floods in Pakistan, especially through an air bridge established for this purpose, and based on the friendly relations that bind them for decades, the two countries expressed their expression Their mutual solidarity in various circumstances.

The two sides agreed to intensify consultation and coordination with the aim of strengthening partnership and strategic cooperation, especially in the field of information and communication technology, and to work together to bridge the digital divide.

In the joint statement, the UAE and Pakistan affirmed their deep-rooted historical relations and their quest to achieve regional and global peace and security, and the two sides expressed their satisfaction at the convergence of views on a range of regional and global issues.

In order to develop concrete and meaningful bilateral cooperation in the main fields, the two sides agreed to intensify consultations and coordination in order to strengthen their strategic partnership. The two sides signed memorandums of understanding in the areas of combating human trafficking, news exchange, and cooperation between the diplomatic academies of both countries.

This month, the UAE participated in the activities of the international conference held in Geneva, which was organized by the Pakistani government and the United Nations, to discuss mechanisms for mobilizing international support for those affected by the devastating floods that swept Pakistan last year, and rebuilding infrastructure, and the UAE affirmed its support for all efforts. International Organization for the Promotion of Emergency Relief, Rehabilitation, Reconstruction and Prevention in the wake of the unprecedented floods that swept Pakistan, noting that the humanitarian response in this regard came to meet urgent needs, and to reach the stricken and affected areas, to ensure access to the basic needs of the population, and improve their living conditions.

The UAE was one of the first countries to respond to the crisis, and hastened to launch an air and sea bridge, which included sending 71 aircraft and six ships with more than 8,000 tons of food, medical and shelter supplies, at a value of more than $80 million, benefiting more than 6.5 million families, most of them women and children. and the elderly.

Over the past five years, the UAE has provided more than $2.4 billion in relief and development supplies to Pakistan, which included providing more than 647 million doses of polio vaccines to 119 million children from 2014 to 2022, and $53 million has been allocated for the period 2023-2026. To continue the vaccination campaign as part of the Global Polio Eradication Initiative.

• $2.4 billion in relief and development supplies provided by the UAE to Pakistan over the past 5 years.

• 71 aircraft and 6 relief aid ships were provided by the UAE to those affected by the floods in Pakistan.