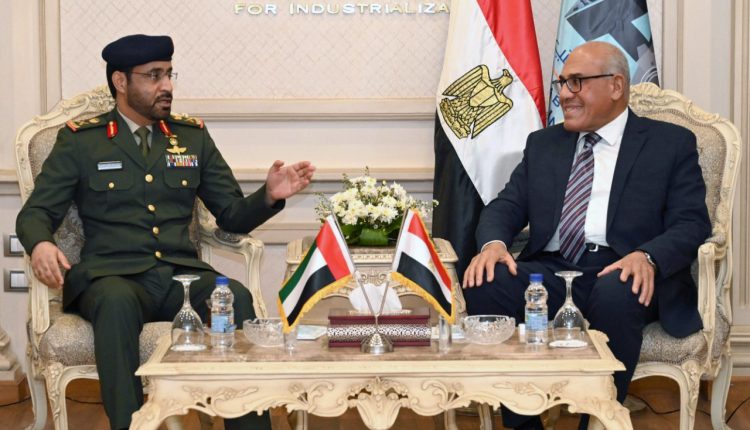 The meeting witnessed a discussion of new opportunities to strengthen relations between the UAE and the sisterly Arab Republic of Egypt in various fields, especially in the field of defense industries.

The two sides also exchanged views on the possibility of establishing cooperation between Emirati companies and Egyptian companies for defense industries, stressing their common interest in exchanging experiences gained by the two sides in the field of defense industries.
The two sides discussed areas of joint cooperation for the defense industry, decisions and legislation, a mechanism for facilitating the work of defense companies of the two countries, and integration in the fields of research and development of defense products.
Major General Dr. Mubarak Saeed Ghafan Al Jabri, Assistant Undersecretary for Support and Defense Industries, also met during the visit, Major General Staff Harb, Engineer Mukhtar Abdul Latif, Chairman of the Board of Directors of the Arab Organization for Industrialization, and invited him to participate in IDEX and NAVDEX 2023 in Abu Dhabi, coinciding with the 30th anniversary of the launch of the event, which is considered The largest of its kind at the regional and global level.
The delegation was briefed on the permanent internal exhibition of the Authority’s products and the plan of the Arab Republic of Egypt to deepen local industrialization and localization of technology and to maximize the slogan “Made in Egypt”, according to the latest standards of the Fourth Industrial Revolution and digital transformation in light of Egypt’s vision for sustainable development 2030 and the goals of the new republic.
The meeting dealt with the future of the defense industries sector in the two countries, and the frameworks that it will focus on during the coming period, especially with regard to entrepreneurship, advanced technology applications, solutions of the Fourth Industrial Revolution, qualifying national cadres, strategic partnerships with major global manufacturers, and strengthening the research and development system.
Major General Dr. Mubarak Saeed Ghafan Al Jabri, Assistant Undersecretary for Support and Defense Industries, praised during the meeting the wise vision of the wise leadership of His Highness Sheikh Mohamed bin Zayed Al Nahyan, President of the State, may God protect him, and his brother, President Abdel Fattah El Sisi, President of the Arab Republic of Egypt, and their continuous support for the development of defense industries of strategic importance in The two countries, and to contribute to the process of economic diversification, noting that the defense industries are one of the important strategic sectors, which have witnessed major leaps in the quality, quality and range of materials, equipment, mechanisms and military technologies that are manufactured in the UAE and the sisterly Republic of Egypt.