Tim Ryan not inviting Biden to join him on Ohio campaign trail; charges Trump took Vance’s ‘manhood’ from him 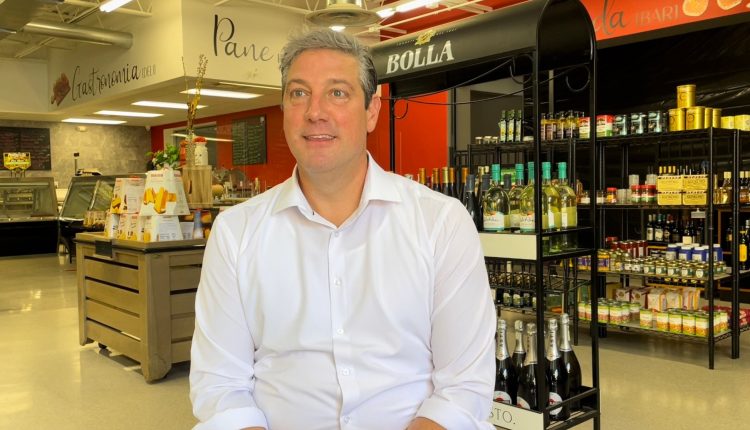 NILES, OH – EXCLUSIVE: Ask longtime Rep. Tim Ryan if he is eager to have President Biden join him on the campaign trail in Ohio, and he will give you a brutally honest answer.

“No, I’m not, and I’m really not inviting anybody,” the longtime congressman from Ohio and his state’s Democratic Senate nominee tells Fox News.

Ryan is spotlighting his Ohio roots and his strong support for the working class as he runs a populist style campaign in a high-profile battle against Republican nominee JD Vance to succeed retiring GOP Sen. Rob Portman, one of a handful of races across the country that will likely determine if the Republicans win back the Senate in November’s midterm elections. Additionally, Ryan has repeatedly showcased his policy differences with the president on numerous issues, including border security and student debt relief.

WITH HELP FROM TRUMP AND THE GOP, VANCE TURNS THINGS AROUND IN BATTLEGROUND OHIO

In a state hard hit by the opioid crisis, and with the extremely powerful synthetic opioid fentanyl illegally transported across the U.S.-Mexico border reaching Ohio, Ryan was asked if he was disappointed that the president had yet to visit the southern border.

“I mean, yeah. I’d like to see him go down there. I think it is a huge issue,” Ryan answered. “You know, we are recovering lots of drugs coming into the country, but not nearly enough. I have a resolution to label fentanyl as a weapon of mass destruction. And we need more Border Patrol. You know, we need more technology. I started the border technology caucus.”

And he touted “I’ve brought back $500 million for law enforcement, so local communities can have the resources they need to be able to combat this at the local level.”

Ohio was once a top general election battleground, but former President Trump carried the Buckeye State by eight points in both his 2016 election and his 2020 re-election defeat. Additionally, Sen. Sherrod Brown’s 2018 re-election was the only statewide victory by a Democrat in Ohio in recent cycles.

However, with five weeks to go until Election Day, an average of the most recent public opinion polls indicates a race that is virtually tied.

When asked how he has kept things close, Ryan explained “I’m talking economics, jobs, wages, pensions, growing the economy, manufacturing, taking on China. Bread and butter issues. We’re staying away from the very polarizing issues, the culture wars that most people aren’t concerned with, and we’re focusing on their pocketbooks. And I think that’s what they want politicians to do regardless of which party you belong to.”

Also boosting Ryan was a barrage of TV ads during the summer months by his campaign that targeted Vance. Ryan dramatically outspent the former hedge fund executive and best-selling author who in May captured the GOP nomination thanks in part to Trump’s endorsement in a crowded and combustible Republican primary. “So all those ads that we spent in the summer defined him, and he’s not going to be able to recover from that,” Ryan argued.

Trump, whose rally with Vance just ahead of the primary helped put the first-time candidate over the top, returned to Ohio last month to headline another rally for Vance. Trump also made headlines as he refuted a New York Times story that suggested that some GOP nominees endorsed by Trump – including Vance – were not inviting the former president back to campaign during the general election campaign.

“J.D. is kissing my a–, he wants my support,” Trump said as he took aim at what he called a “fake” news story. “The entire MAGA movement is for J.D. Vance,” the former president stressed.

THESE 11 SENATE RACES WILL DECIDE CONTROL OF THE SENATE

While Biden does not have any invitation from Ryan to campaign in Ohio (although the president and Ryan both attended an official groundbreaking of a new semiconductor manufacturing facility in Ohio on Sept. 9), the Vance campaign took issue with Ryan’s showcasing of his differences with the president and his nearly surrogate-free campaign.

“JD is proud to have the entire Republican Party unified behind him. Meanwhile, Ryan’s running from his 100% voting record with Joe Biden and is leaning on leftist Hollywood celebrities like John Legend and Paul Simon to campaign for him. Ryan’s campaign even held an event in Ohio with New Jersey senator Cory Booker, one of the most liberal lawmakers in the nation – but they kept it quiet,” Vance campaign press secretary Luke Schroeder argued.

While pointing to comments the congressman made during the primary campaign, Schroeder charged “Ryan’s said he loves Nancy Pelosi, and he votes with her 100 percent of the time in Congress. He’s said he needs to ‘suck up’ to Chuck Schumer because he could be his ‘future boss.’ The last thing Ohio needs is a senator who’s in the pocket of New York and California liberal elites.”

While Vance worked to coalesce Ohio’s Republican base after a bruising primary, Ryan repeatedly highlighted his support for some Trump policies.

“I’ve agreed with Trump on trade and on China…. it. When Trump renegotiated NAFTA. I was on the Whip team in the House of Representatives to whip votes in support of the President’s renegotiation….I supported his defense budgets because we do need a strong military to combat China and Russia,” Ryan noted.

Trump and Vance are not buying it.

At his rally in Youngstown, Trump charged that Ryan’s “pretending to be a moderate so he can get elected … he is not a moderate. He’s radical left.”

Vance additionally claimed that Ryan tries to come across as a moderate in his “nonstop fraudulent television commercials,” and argued that there are “two Tims out there. A D.C. Tim that votes 100 percent of the time with Joe Biden, and there’s campaign Tim who pretends he’s a moderate.”

Ryan reiterated that he is one of the top bipartisan members of the House and vowed “I will be that way when I’m in the Senate.”

Besides the support from Trump, Vance was boosted in the primaries by nearly $15 million in spending by a super PAC financed by PayPal co-founder and billionaire venture capitalist Peter Thiel, Vance’s former boss. In the final stretch to November, a super PAC aligned with longtime Senate GOP leader Mitch McConnell’s dishing out $28 million to back Vance.

Ryan charged that Vance is “trying to just buy this seat with Mitch McConnell’s money and a Silicon Valley billionaire’s money to get himself into the Senate, and it’s just not gonna work.”

Ryan and his campaign for months have targeted Vance for his years living in California as a venture capitalist, labeling the GOP nominee as a “San Francisco guy.”

However, Vance’s campaign returned fire in recent days over Ryan’s trip to Los Angeles for “a high-dollar fundraiser with Hollywood elites.”

Ryan acknowledged “we raised some money out in California,” but charged “that is in stark contrast of picking up and leaving Ohio and living in San Francisco for a number of years, giving up on Ohio, having your entire campaign funded by a Silicon Valley billionaire.”

“I’ve been here in Ohio with my family in public schools. My wife was a schoolteacher for 20 years. We’re here to fight for Ohio, not give up on it and I think there’s stark contrast there, so they can try to use whatever, you know, little clickbait they can get, but it’s not going to work here in Ohio. People know,” Ryan argued.

Democratic candidates, committees, and outside groups have been spotlighting the combustible issue of legalized abortion in the three months since the Supreme Court’s conservative majority, in a blockbuster opinion, overturned the landmark Roe v. Wade ruling, sending the fight over women’s reproductive rights back to the states.

“I think that the abortion decision was the largest governmental overreach in the private lives of American citizens in the history of our lifetime. Big government coming into doctors’ offices and bedrooms, violation of basic American values if you ask me. I think it’s anti-American,” Ryan emphasized.

However, when asked if Democrats were making a mistake by concentrating much of their firepower on abortion, Ryan answered “I am focusing on the economy. I think these bread-and-butter economic issues are what are on people’s minds. Will I fight for women to be able to make their own health care decisions. Absolutely. 1,000 percent. But the vast majority of people in Ohio are struggling because of inflation, cost of gas cost of food, and they need help. That’s why I’m promoting a tax cut. That’s why I’m promoting manufacturing building these jobs of the future like we’re doing here in Ohio.”

While the polls indicate a close contest, the race in Ohio may come down to the two scheduled debates between Ryan and Vance later this month

Ryan said his mission at those showdowns is to “let people see who JD Vance really is. I mean, people know me.” And he argued “I just want to make sure they understand that this is a guy that tried to use Ohio to get a Senate seat.”