The American presence in Syria is more dangerous than ever 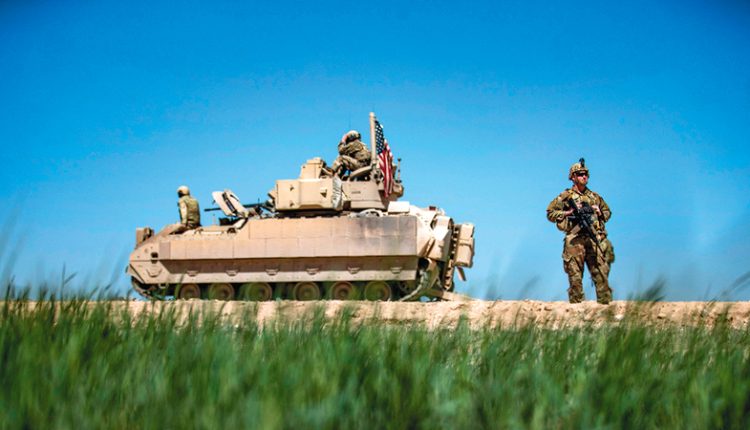 The principle that “we have to leave the old and start with the new” seems to be the one that the United States is following in Syria at the beginning of 2023. American forces will resume their operations after a hiatus following the Turkish attack on the Kurdish forces supported by the United States. This approach ignores the perilous status quo that has made the continued presence of the United States in Syria increasingly vulnerable.

It proved that Washington’s decision to support the Syrian opposition at the beginning of the Syrian civil war was like walking in a minefield, and helped the emergence of ISIS, in addition to other groups of militias. The carnage of this war fueled further U.S. involvement, and with the defeat of ISIS, Washington’s justification for remaining in Syria became more muddled. Now, the crooked logic on which the United States bases its forces in Syria is to protect these forces only. This circle of self-sufficiency, in which Washington presents problems before any solution, has been prolonged for too long.

Although Washington’s strategy seems static, the situation is dynamic and more volatile than ever. The missiles launched by Turkey in its attack on the Kurdish forces fell about 130 meters away from the American forces.

Turkey regards Washington’s Kurdish allies as terrorists, and the bombing in Istanbul a short while ago raised the possibility of another Turkish ground attack on Syria. Turkey is a member of NATO, and some time ago it banned Finland and Sweden from joining the alliance due to its concern about the Kurdish militias. Most likely, the United States will not gain anything from increasing its involvement in a conflict that has continued since the seventies of the last century. In addition, anti-Turkey will most likely destabilize the cohesion of NATO, given how seriously Ankara takes terrorist threats.

In a similar way, the American presence in Syria has continued for more than its intended purpose. In the recent period, ISIS lost its leader for the third time. Three years after ISIS lost the territory it controlled, the organization’s presence has been wiped out to the point that the last two leaders of the organization who were killed have not known their identities. Washington’s Kurdish allies halted their operations against ISIS completely. But why is the United States willing to risk hundreds of American soldiers to fight an enemy that is on the verge of extinction?

Risk should not be accepted

Even before Turkey’s recent attacks in Syria, there were plenty of reasons for the withdrawal of US forces. Iranian-backed militias have long regularly targeted US forces inside Iraq and Syria. The United States should not accept this risk. These militias will continue their fight against the American forces until they leave the region. The withdrawal of the American forces is not considered a concession of its initiative, nor a defeat for it, but rather an acknowledgment that a decade of absurd tactics of moves that did not achieve any gains. Indeed, Washington’s duty is to the American people, not on a dubious mission with unclear goals.

The occupation of Syria is cheap

Syria is not considered to be at the core of US interests, as it lies on the periphery of an area that the US has neglected in its national defense strategy. By comparison, Syria is very important to Iran. Accordingly, if the United States is the largest player, Iran is willing to take great risks to maintain its influence in Syria. This means that it will work to support dangerous attacks on American soldiers, in order to put pressure on Washington to withdraw its forces from Syria.

The occupation of Syria may seem cheap, but it is not, in fact, for several reasons: while 900 American soldiers seem like a small force, it overlooks the equipment and costs necessary to provide them with the necessary and continuous support. Lower expenditures also do not affect the risk of escalation with Iran, which could prove devastating to US forces in the Persian Gulf. Tens of thousands of American soldiers are in close proximity to Iranian ballistic missiles, as well as drones, whose devastating effects cannot be denied.

Washington continues to pay more blood and treasure for a never-ending conflict that has cost thousands of civilian lives. Prolonging this US military mission indefinitely may be politically easy, but it smacks of moral cowardice in order not to change the failed paradigm of the past decade. In fact, the outcome of the wrong intervention from the start in Syria cannot be calculated on the battlefield only. There are mothers, fathers, and children who endure the indefinite distance of their parents from them and the fear of losing loved ones. Now is the time for Washington to consider ending this headache and returning our soldiers from Syria home to their families.

• It has been proven that Washington’s decision to support the Syrian opposition at the beginning of the Syrian civil war was like walking in a minefield, and helped the emergence of ISIS, in addition to the militias.

• Washington continues to pay more blood and treasure for a never-ending conflict that has cost thousands of civilian lives.

What is the wisdom of the presence of American forces?

The American politician, Chris Murphy, who chairs the Subcommittee on US Foreign Relations, published a statement questioning “the wisdom of the spread of so many Americans in that region.”

Darine Khalifa, an analyst specializing in Syrian affairs at the International Crisis Group, told DW, “Whenever the American forces there are attacked, the question arises again: Why are they there?”

American forces have been stationed in Syria since 2015, and today there are still about 900 American soldiers deployed in the area known as the “Eastern Syrian Security Zone.” Those forces, along with about 2,500 military personnel stationed in Iraq, are ostensibly part of Operation Inherent Resolve, that is, the international coalition to defeat ISIS.

But given the significant deterioration in the strength and capabilities of ISIS, some Americans are questioning their country’s policy in Syria.

Jeffrey Feltman, former US Assistant Secretary of State for Near Eastern Affairs, said in an article in January 2021 published on the website of the Quincy Institute for Responsible Statecraft think tank: “With the exception of confronting the (ISIS) threat in northeastern Syria, US policy since 2011 has failed to achieve Positive results”.

And in September 2021, Abd al-Rahman al-Masri, a former fellow in the “Rafic Hariri and Middle East Department” at the Atlantic Council think tank in Washington, wrote: “There has been no stand-alone and consistent policy towards Syria by successive US administrations since the beginning of the conflict in 2011. United States You don’t know what you want in Syria. Both friends and foes know this.

Jeff Lammer is a researcher at Defense Priorities, an American think tank