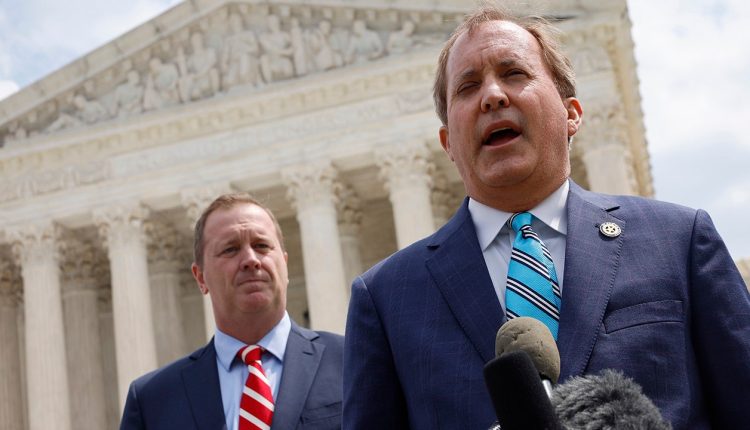 The Supreme Court will hear arguments today in a lawsuit brought by Republican Attorneys General Ken Paxton of Texas and Jeff Landry of Louisiana that says President Biden’s Department of Homeland Security is ignoring laws passed by Congress that regulate the detention of illegal immigrants.

Their lawsuit claims that Homeland Security Secretary Alejandro Mayorkas acted unlawfully when he issued a memo that limited the authority of U.S. Immigration and Customs Enforcement (ICE) to deport illegal immigrants.

In September 2021, Mayorkas sent a memo to ICE and other relevant agencies stating that there are “more than 11 million undocumented or otherwise removable noncitizens in the United States” and that DHS does not have “the resources to apprehend and seek the removal of every one of these noncitizens.” He directed the agencies to “exercise our discretion and determine whom to prioritize for immigration enforcement action.”

“In exercising our discretion, we are guided by the fact that the majority of undocumented noncitizens who could be subject to removal have been contributing members of our communities for years,” Mayorkas said in the memo. “They include individuals who work on the frontlines in the battle against COVID, lead our congregations of faith, teach our children, do back-breaking farm work to help deliver food to our table, and contribute in many other meaningful ways.”

A memo from Secretary of Homeland Security Alejandro Mayorkas will be at the center of Supreme Court oral arguments on Tuesday, Nov. 29, 2022.
(Kevin Dietsch/Getty Images)

“The fact an individual is a removable noncitizen therefore should not alone be the basis of an enforcement action against them,” he continued. “We will use our discretion and focus our enforcement resources in a more targeted way.”

Texas and Louisiana sued the administration and said compliance with the memo meant ICE was violating federal law because it refused to take custody of “dangerous criminal illegal aliens.” The states also claimed that DHS, as an executive branch agency, has no authority to “disregard legislative direction” given by Congress. The states also argued that the memo caused DHS to rescind “detainers” – notices from DHS that they intend to take custody of criminals released from prison for deportation.

Earlier this year, a federal district court found that “numerous criminal aliens with rescinded detainers had reoffended, failed to comply with state parole conditions, or simply disappeared.” That court also said the states have standing in the lawsuit because they “bear costs related to law enforcement, recidivism, healthcare, and education that are traceable to the Final Memorandum” and that the DHS memo was contrary to law and procedurally unlawful because it constituted a policy that did not go through formal notice-and-comment procedures.

ICE officials were told to put a lower priority on the removal of millions of illegal immigrants.

Federal District Court Judge Drew Tipton said the DHS memo was “an implausible construction of federal law that flies in the face of the limitations imposed by Congress.”

“Whatever the outer limits of its authority, the Executive Branch does not have the authority to change the law,” Tipton added.

After the states won in federal district court, the Biden administration sought a stay in the court of appeals, which was denied. The administration asked the same of the Supreme Court, which denied their request and set oral arguments on the merits for today.

He added that “the Supreme Court made clear that, while we prepare for oral argument this winter, the Biden administration must detain illegal aliens with criminal convictions.”

The states are now hoping the court rejects the Biden administration’s appeal on the merits.

Brianna Herlihy is a politics writer for Fox News Digital.