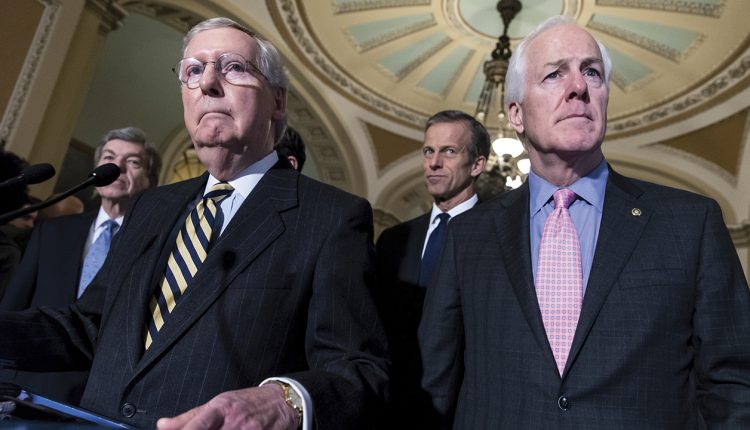 The Senate passed a bipartisan gun bill late Thursday night in a 65-33 vote.

The bill, spearheaded by Sens. Chris Murphy, D-Conn., and John Cornyn, R-Texas, comes in the wake of several recent mass shootings. The mass shooting at an elementary school in Uvalde, Texas, which left 19 children and two teachers dead, was the major driver behind the bipartisan effort.

“I am proud that after weeks of hard work, the Senate passed the Bipartisan Safer Communities Act, a bill I negotiated with my colleagues,” Cornyn said. “Our bill will save lives while placing no new restrictions on law-abiding gun owners.”

Senate Majority Leader Chuck Schumer said the Safer Communities Act was the first major gun safety legislation to be passed since the Brady Bill in 1994.

Senate Majority Leader Chuck Schumer, D-N.Y., responds to questions from reporters during a press conference regarding the Democratic party’s shift to focus on voting rights at the Capitol in Washington, Tuesday, Jan. 18, 2022.
(AP Photo/Amanda Andrade-Rhoades)

The bill would provide funding for states to create programs that could keep weapons away from people who are dangers to themselves or others, often called red flag laws. It would also enhance background checks for gun buyers under 21, add penalties for some gun criminals and provide funding for a variety of health and mental health-related programs.

It also addresses closing the so-called “boyfriend loophole,” which is a gap in federal law that means spousal domestic abusers can have gun rights taken away but not unmarried ones.

Sen. John Cornyn, R-Texas, arrives to meet with Sen. Chris Murphy, D-Conn., and Sen. Kyrsten Sinema, D-Ariz., arrive for more bipartisan talks on how to rein in gun violence, at the Capitol in Washington, Wednesday, June 15, 2022. Democratic and Republican negotiators have already reached a broad agreement but still need to convert that accord into legislation, in hopes that Congress could approve it before leaving for its July 4 recess.
((AP Photo/J. Scott Applewhite))

President Biden in a statement after the bill’s passage said that after 28 years of “inaction, bipartisan members of Congress came together to heed the call of families across the country and passed legislation to address the scourge of gun violence in our communities. Families in Uvalde and Buffalo – and too many tragic shootings before – have demanded action.  And tonight, we acted.

“This bipartisan legislation will help protect Americans. Kids in schools and communities will be safer because of it. The House of Representatives should promptly vote on this bipartisan bill and send it to my desk.”

All 48 Democrats and two Independents voted for the bill along with 15 Republicans.

“The legislation that Senator Cornyn and our colleagues assembled protects the Second Amendment,” McConnell said in a statement. “There are no new bans, mandates, or waiting periods for law-abiding citizens of any age. What the bill does contain are commonsense solutions that are overwhelmingly popular with lawful gun owners, such as adding juvenile criminal records and mental health issues into the background check system. It also provides significant new funding for mental health in schools.

“I am proud of my work to advance commonsense, bipartisan legislation that improves mental health care, strengthens school safety, and saves lives while protecting the Second Amendment rights of law-abiding North Carolinians,” Tillis said in a statement. “I am grateful for the work of my colleagues Senators Cornyn, Murphy, and Sinema to find common ground and produce solutions, and I look forward to seeing the Bipartisan Safer Communities Act signed into law soon.”

The bill now heads back to the House. President Biden has said he intends to sign it if passed.

This is a breaking story. Check back for more details.

In protest against poverty and poor conditions, Libyans demolish the Parliament with…