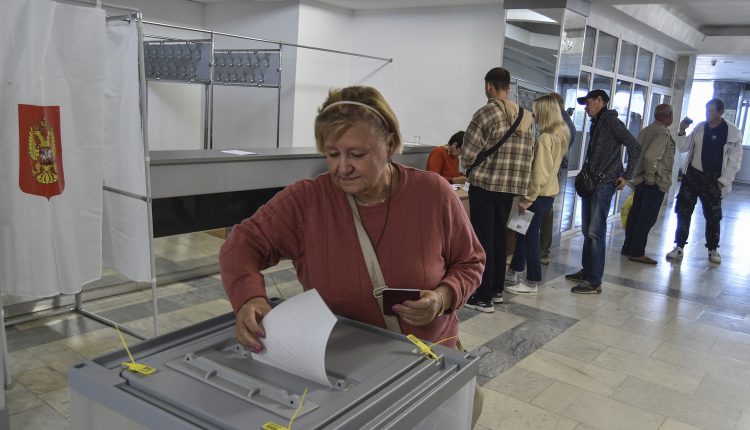 Today, Moscow-controlled regions of Ukraine began referendums on joining Russia, in a move condemned by Kyiv and its Western allies and considered illegal and an escalation of the conflict, and announced the restoration of a town in the east.

Referendums taking place in Donetsk and Lugansk regions in eastern Ukraine, as well as in the southern regions of Kherson and Zaporizhia, were widely condemned and considered false by Kyiv’s allies.

The referendums will continue for five days, and come in the wake of Putin’s announcement this week of a mandatory mobilization of about 300,000 reservists, which in turn drew condemnation in Western countries.

For four days, officials are supposed to go to people’s homes to collect cards, then polling stations will open on the last day, that is, Tuesday, for residents to cast their votes.

The authorities also made it possible to vote in a building in Moscow representing the breakaway region of Donetsk region.

Earlier this month, Ukrainian forces regained control of most of the Kharkiv region (northeast) in a major counter-offensive during which they liberated hundreds of villages and towns that had been under Russian control for months.

Today, the Russian TASS news agency broadcast scenes showing officials in the courtyards of buildings in Donsk telling people on the radio that voting had begun and they were surrounding a citizen as he cast his vote.

“Donbass is Russia,” said Denis Pushilin, the leader of pro-Russian separatists in the Donetsk region, which is part of the Donbass industrial region, in a message on Telegram. “The vote of each of you will confirm the truth,” he added.

Any annexation of the four regions to Russia, which is a foregone conclusion to most observers, would represent a significant new escalation in the conflict.

These referendums are reminiscent of Russia’s annexation of Ukraine’s Crimea peninsula in 2014.

Western capitals say the voting is sham and responded by imposing sanctions on Moscow.

In the eastern Donetsk and Lugansk regions, whose independence Putin recognized even before the start of the war in Ukraine in February, residents will be asked to answer whether they support “the accession of their republic to Russia,” according to the Russian news agency, TASS.

“Due to time constraints and lack of technical equipment, the decision was made not to conduct electronic voting and to use traditional paper cards,” TASS said.

This comes at a time when the Ukrainian army announced, today, the recapture of the town of Yatskivka from Russian forces in the Donetsk region in the east of the country.