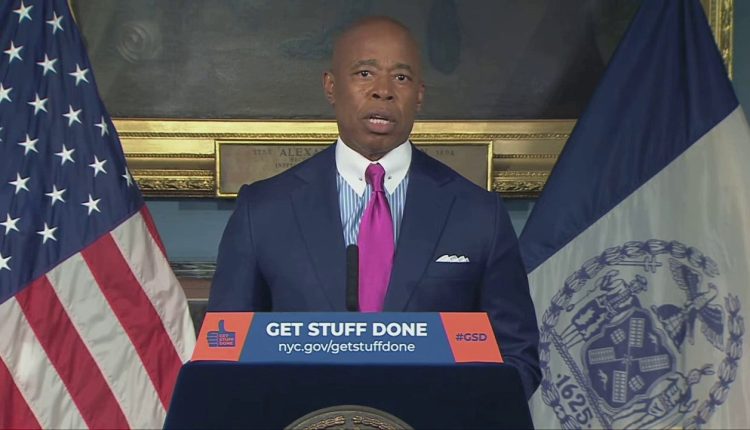 More than 17,000 migrants have been bused to the city since the spring, a small fraction of the migrant encounters at the border over that timeframe. Fox News cameras at the Port Authority transportation terminal filmed eight buses arriving Friday, after nine arrived Thursday.

Adams said that one in five people in the city’s shelter system is a migrant, which is creating the “crisis.”

“This is a humanitarian crisis that started with violence and instability in South America and is being accelerated by American political dynamics,” Adams said Friday. “Thousands of asylum seekers have been bused into New York City and simply dropped off, without notice, coordination, or care — and more are arriving every day.”

Adams has criticized Texas Gov. Greg Abbott repeatedly for the influx of migrants, accusing the Republican of turning illegal immigrants into political pawns.

“This crisis is not of our own making but one that will affect everyone in this city, now and in the months ahead,” Adams continued Friday. “New Yorkers deserve to know why this is happening and what we plan to do.”

But the bussing is a bipartisan effort, with the Democratic mayor of El Paso, Texas, sending more migrants to New York City than Abbott.

The border city, which has been at the front line of the massive migrant crisis that has raged since early 2021, has so far bused over 2,500 migrants to New York City since the end of August — as well as about 150 migrants to Chicago.

El Paso’s Democratic Mayor Oscar Leeser has said of the fellow Democratic mayors’ criticisms, “The people are not coming to El Paso, they’re coming to America.”

Adams suggested that more shelters may need to be built, in addition to the one going up in Randalls Island. The mayor has used 42 hotels to house migrants, and has even worked on a deal with Norwegian Cruise Lines for more housing.

Eight-year-old boy dies after choking on…