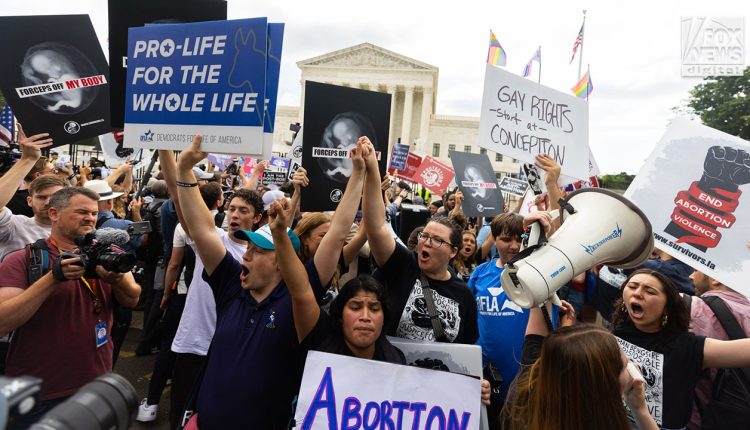 Montana voters rejected the Born-Alive Infant Protection Act that would have required medical professionals to perform lifesaving medical care on infants who survived abortions or were born prematurely.

The pro-life measure would not have prevented Montana residents from receiving abortions, but would have required “medical care be provided to infants born alive” as a result of a natural or induced labor, failed abortion or a cesarean section.

The measure failed by around 20,000 votes, with 52.6% voting against it and 47.4% in favor of its passage at the time The Associated Press called the race.

“A health care provider performing an abortion shall take all medically appropriate and reasonable steps to preserve the life and health of a born-alive infant who is viable. If an abortion performed in a hospital results in a live birth of a viable infant, the health care provider shall provide immediate medical care to the infant,” the ballot measure stated.

A pro-life advocate holds up a newspaper outside the Supreme Court.
(Joshua Comins/Fox News)

The pro-life legislation acknowledged that an infant born alive after an attempted abortion is a legal person and would have granted them the rights to medical care after birth. “If an abortion results in the live birth of an infant, the infant is a legal person for all purposes under the laws of this state,” it stated.

The law also sought to penalize doctors if they failed to treat infants as living persons and take the required, necessary actions to “preserve the life of a born alive infant.” The bill recognized evidence of life as an infant who breathes, has a beating heart and definite movement of voluntary muscles.

“Without proper legal protection, newly born infants who have survived abortions have been denied appropriate lifesaving or life-sustaining medical care and treatment and have been left to die,” the bill read.

“In Montana, pro-abortion forces ran TV ads characterizing the initiative as an ‘an extreme, harmful government intrusion into medical care,’ when all the initiative would do is provide the same level of care to an infant who survived an abortion as you would to an infant born early in pregnancy. If Montana voters knew the truth about what the initiative would actually do, it would have passed overwhelmingly. Our side must do a better job raising the resources needed to go toe-to-toe with the heavily funded abortion industry to arm voters with the truth,” Dannenfelser said.

On Tuesday, California and Vermont enshrined the right to an abortion into their state constitutions.
(Damian Dovarganes)

Planned Parenthood did not respond to Fox News Digital’s request for comment.

Following the overturning of Roe v. Wade in June, abortion measures were on the ballot and passed in five states this cycle: California, Michigan, Montana, Vermont and Kentucky.