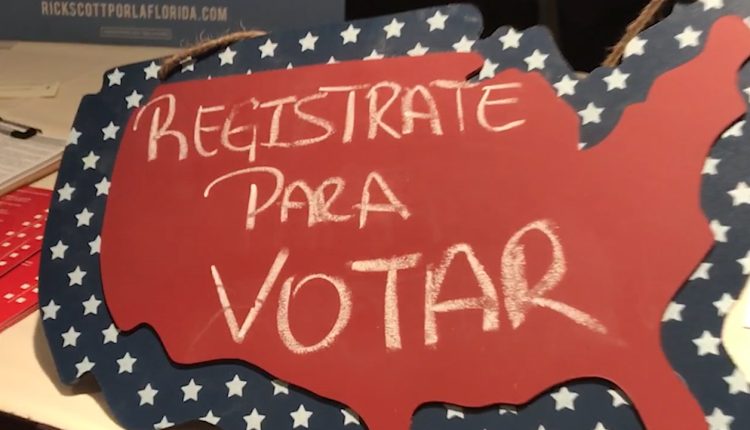 The largest left-wing Latino voter mobilization PAC in the country is overwhelmingly bankrolled by secretive donations for the 2022 midterm elections, a Fox News Digital review of federal filings has found.

The Somos PAC, which works to get Latino voters to the polls in key swing states, has raked in $3.8 million to benefit Democratic candidates this November, Federal Election Commission (FEC) records show.

Of that amount, $3.2 million has flowed from dark money nonprofits, effectively hiding the original donors.

The practice of dark money nonprofits steering contributions into federal elections has gained steam in recent years, sometimes leaving voters unaware of who is funding political activity and advertisements in their states.

The Somos PAC is in the midst of a multimillion-dollar campaign against Nevada Republican Senate candidate Adam Laxalt.
(Adam Laxalt campaign)

The Somos PAC’s anonymous cash has entered the committee through groups financially backed or tied to a multibillion-dollar dark money network managed by the D.C.-based Arabella Advisors consulting firm. Some of the wealthiest liberal donors use the network as a conduit to finance Democratic initiatives, ultimately masking where the money ends up.

According to FEC filings, the Somos PAC received $2.6 million from the North Fund, $447,000 from the Family Friendly Action Fund and $175,000 from the Change Now PAC, all of which received substantial funding from a nonprofit that’s a part of the extensive dark money network.

The Sixteen Thirty Fund, a 501(c)(4) nonprofit that acts as a fiscal sponsor to dozens of liberal advocacy groups, and which is run by Arabella Advisors, provided the North Fund with nearly $30 million in 2019 and 2020, tax forms show. The North Fund has also paid nearly $1 million to Arabella Advisors for consulting fees.

A PAC that has been linked to a network created by Swiss billionaire Hansjörg Wyss provided funding to the Somos PAC.
(Getty Images)

Meanwhile, the Sixteen Thirty Fund is the sole funder of the Change Now PAC, according to FEC records. Change Now appears to be linked to a covert political operation tied to Swiss billionaire Hansjörg Wyss, who has quietly emerged as a significant funder of Democratic causes.

The Wyss Foundation, one of two nonprofits established by the Swiss financier, created an operation at the Sixteen Thirty Fund and New Venture Fund, another Arabella-managed nonprofit, called the Hub Project, The New York Times reported. Years before Wyss had been linked to the operation, the Times reported that the Hub Project controlled the Change Now PAC. His citizenship has since come under a microscope.

There is no indication that Wyss is a United States citizen, and he has previously said he is not. A 2021 filing with the Securities and Exchange Commission lists Wyss as a “citizen of Switzerland.”

“Both organizations expressly prohibit their grantees from using grant funds for electoral activities, including to support or oppose political candidates or parties,” Banks added. “The Wyss Foundation and Berger Action Fund follow all laws, regulations and disclosure requirements.”

Billionaire George Soros was one of the top donors to the Somos PAC during the 2020 elections.
(Simon Dawson/Bloomberg via Getty Images)

The Somos PAC previously received millions from the likes of America Votes, Michael Bloomberg and George Soros during the 2020 elections.

Somos is setting its sights on Nevada, pouring millions into independent expenditures against Republican Senate candidate Adam Laxalt, who is attempting to oust Democratic Sen. Catherine Cortez Masto this November.

Though Democrats have taken Nevada in the past four presidential elections, the Silver State is shaping up as a competitive Senate battleground in this fall’s midterm elections.

The Somos PAC did not respond to a Fox News Digital inquiry on its dark money funding.