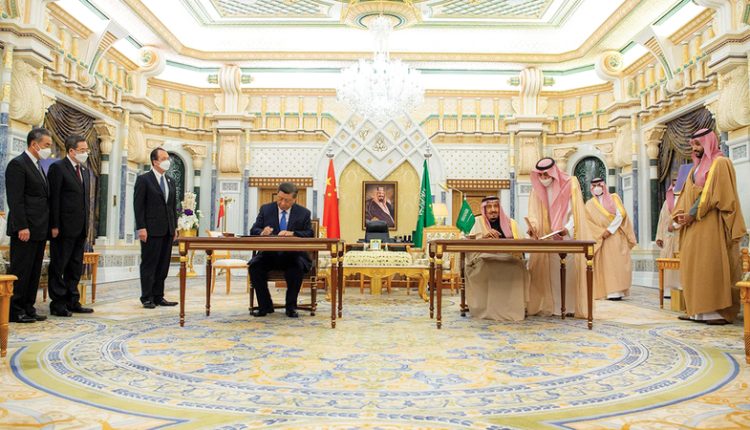 Yesterday, the Custodian of the Two Holy Mosques, King Salman bin Abdulaziz, reviewed with Chinese President Xi Jinping, at Al Yamama Palace in Riyadh, the historical friendship relations between the Kingdom of Saudi Arabia and the People’s Republic of China.

During the meeting, which was attended by Prince Mohammed bin Salman bin Abdulaziz, Crown Prince and Prime Minister, ways of strengthening bilateral relations were discussed to serve the interests of the two friendly countries and peoples in various fields.

After that, King Salman bin Abdulaziz and the Chinese President signed the comprehensive strategic partnership agreement between the Kingdom of Saudi Arabia and the People’s Republic of China.

And the Saudi Press Agency (SPA) stated that the Saudi crown prince and the Chinese president also witnessed the conclusion of a number of agreements and memorandums of understanding between Beijing and Riyadh in areas including hydrogen energy and encouraging direct investment.

Yesterday, Prince Mohammed bin Salman held a session of official talks with the Chinese President at the Royal Court in the capital, Riyadh.

The Chinese president arrived, Wednesday, in the Kingdom of Saudi Arabia, on an official visit that will continue until today, Friday.

During the visit, a Saudi-Chinese summit will be held, chaired by the Custodian of the Two Holy Mosques and the Chinese President, with the participation of Prince Mohammed bin Salman. During the visit of the Chinese president, three summits are held, namely the “Saudi Arabia-Chinese, the Gulf-Chinese, and the Arab-Chinese”, in the presence of more than 30 leaders of countries and international organizations, which reflects the importance of holding these summits, and the regional and international attention they enjoy.

Egyptian President Abdel-Fattah El-Sisi and the head of the Sudanese Sovereign Council, Abdel-Fattah Al-Burhan, arrived in Riyadh to attend the Arab-Chinese summit. Kuwait’s Crown Prince, Sheikh Mishaal Al-Ahmad Al-Sabah, also arrived in the Saudi capital to participate in the Arab and Gulf-Chinese summits.

In a related matter, the Secretary-General of the League of Arab States, Ahmed Aboul Gheit, affirmed that the convening of the Riyadh-Chinese Summit for Cooperation and Development gives great weight to relations, and reflects the political will of the Arab and Chinese sides, expressing his wishes that the summits will continue periodically to maintain the momentum of these relations.

Aboul Gheit said, in a statement to the Saudi Press Agency (SPA), published yesterday, that the visit of Chinese President Xi Jinping to the Kingdom of Saudi Arabia, and the holding of the Riyadh-Chinese summit, is a historic event by all standards, and reflects the weight of the Arab region in the international economic system, as well as a common understanding. From China and the Arab countries for the requirements of the current moment, which is witnessing successive and prolonged global crises, which necessitates building bridges of communication and joint action to find effective initiatives to deal with the reality of crises, and mitigate their effects on peoples, as well as employing the capabilities available to both parties, Arab and Chinese, to achieve prosperity desired.

For his part, Abd al-Rahman Ahmed al-Harbi, the Saudi ambassador to China, confirmed in an exclusive interview with the Chinese News Agency (Xinhua) that the Chinese president’s participation in the work of the first Arab-Chinese summit hosted by Riyadh constitutes a milestone in the strategic partnership between the Arab countries and China, and a landmark event. In the process of strengthening relations, developing eternal friendship, and consolidating mutual political trust. His participation is also a tangible progress for cooperation within the “Belt and Road” framework, and a prelude to fruitful results for existing and future practical cooperation between the two sides in various fields.