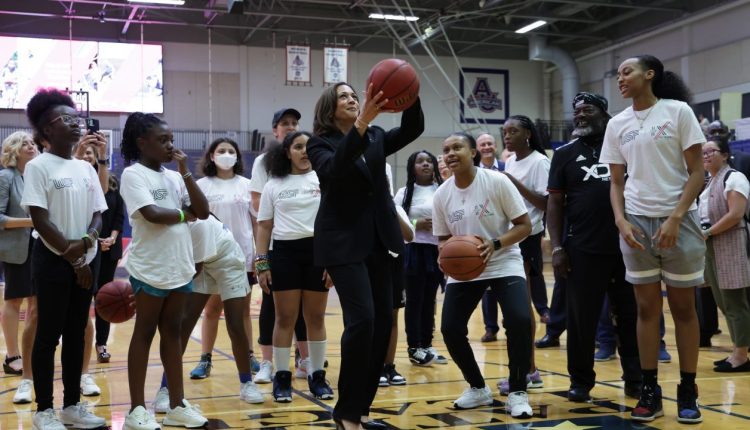 Vice President Kamala Harris’ office tweeted a video of Harris sinking a basketball shot, but edited out her first five shots, which missed.

Opal Vadhan, an aide to Harris, posted the video with the caption “Madam VP” and three basketball emoji icons on Wednesday. The five-second clip showed the vice president sinking the shot during an event marking the 50th anniversary of Title IX at the American University sports center.

The Republican National Committee (RNC) then responded Thursday with a full video of the entire sequence of events. The full clip, which lasts nearly two minutes, showed Harris missing her first five attempts before her husband, Douglas Emhoff, walked to her side and appeared to offer a tip. The vice president made her sixth shot.

The event was held to encourage young girls “to get active, try new sports, hear from champion athletes and leaders, and learn how Title IX impacts their lives.”

Harris, meanwhile, has committed a series of gaffes since taking office 17 months ago. The vice president’s approval rating has plummeted to just 39%, according to a recent Fox News poll.

Thomas Catenacci is a politics writer at Fox News Digital

Including not putting the phrase “VIP” .. Saudi Arabia announces the rules for Hajj…

Casualties and missing persons in an avalanche in the Italian Alps

Some of them decomposed.. 31 bodies were found in a funeral home in the US state of…