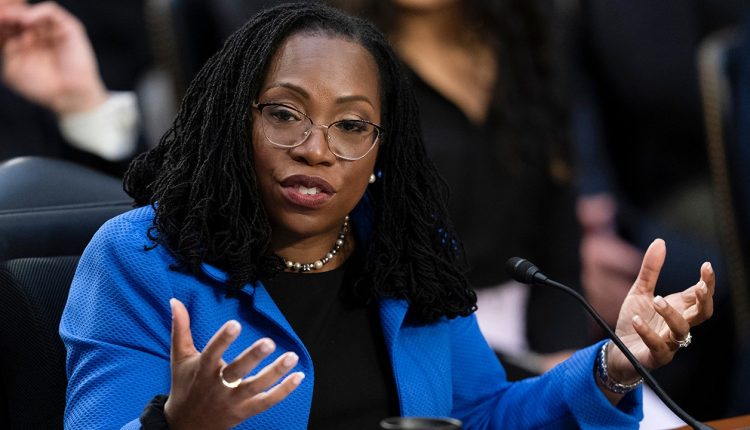 Supreme Court Justice Ketanji Brown Jackson, the newest addition to the high court, participated in her first oral arguments on Monday, jumping right into the fray to grill the attorney representing an Idaho couple challenging the Environmental Protection Agency.

The case, Sackett v. EPA, is based on whether a lower court used the proper test to determine whether property owned by Michael and Chantell Sackett, is protected “wetlands” under the Clean Air Act, which prohibits discharging pollutants into “navigable waters.” The EPA argues that the property qualifies as being adjacent to Priest Lake, while the Sacketts’ lawyer says to be adjacent, a piece of property would need to have surface water that connects to the navigable waters.

“But counsel, why is it that your conception of this does not relate in any way to Congress’s primary objective?”Jackson asked attorney Damien Michael Schiff. “Do you dispute that the primary objective stated in the statute … is that Congress cared about making sure that the chemical, physical, and biological integrity of the nation’s waters was protected?”

Schiff countered that just because Congress has an interest, that does not mean it intends to pursue that interest at all costs. He argued that there are competing state interests at play.

“So why didn’t Congress say ‘immediately adjacent?’” Jackson asked, noting that lawmakers could have accounted for such competing interests by narrowing the scope of the law in their statutory language.

Justice Sonia Sotomayor backed up her new colleague by asking why Congress did not use the word “abutting” – which she said also appears in the statute – instead of “adjacent.”

Later in the hearing, Justice Neil Gorsuch challenged EPA lawyer Brian Halligan Fletcher by asking how close property must be to water for it to be adjacent. Gorsuch asked if three miles was close enough, and Fletcher said that was likely too far. Gorsuch made his point by continuing to ask about closer proximity to try to narrow down a definition for which there is none.

“So if the federal government doesn’t know, how is a person subject to criminal time in federal prison supposed to know?” Gorsuch asked, referring to how the adjacent standard applies to both civil provisions in the Clean Water Act – as in the current case – and criminal ones.

Jackson joined in, noting that Gorsuch’s point was a “fair” one, but then asked a question that worked in the EPA’s favor.

“Is there a process by which a homeowner can ask?” Jackson inquired, to which Fletcher answered in the affirmative and said that a property owner can ask if their land is considered adjacent to water before they begin developing it.

Monday was the first time the Supreme Court building was open to the public for oral arguments since the COVID-19 pandemic shut it down in March 2020.

Jackson was sworn in as the 116th justice in late June, becoming the first Black woman ever to serve on the Supreme Court. President Biden nominated her following the announcement that Justice Stephen Breyer would retire at the conclusion of the Court’s most recent term. Jackson’s swearing-in process took place moments after the Court handed down its final opinions of that term, which also involved the EPA.

In that case, West Virginia v. EPA, the justices ruled against the agency, narrowing the scope of its authority under the Clean Air Act.