Including not putting the phrase “VIP” .. Saudi Arabia announces the rules for Hajj buses 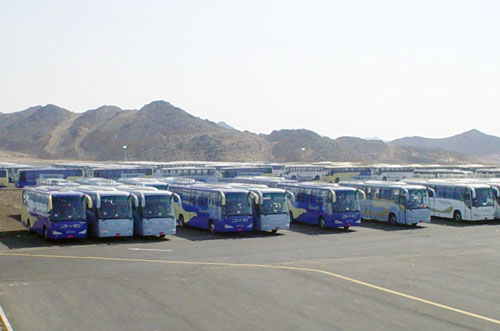 The Ministry of Hajj and Umrah obligated the companies and institutions of domestic pilgrims operating during the Hajj season this year not to put a VIP ferry on the buses that will transport pilgrims during the performance of rituals and rituals, Okaz newspaper reported on Monday.

The ministry demanded that the capacity of the buses not exceed the number of pilgrims allocated to them, while specifying the ratio of reserve buses to be one bus for every 500 pilgrims, and obtaining a permit to enter the buses to the holy sites after they have been checked by the periodic inspection, and not to rent buses from outside the Kingdom at all.

The instructions also instructed not to use buses for the purpose of internal transportation of passengers between cities or within the holy sites in the form of individual loading.

She indicated that the instructions require the reservation of all dilapidated buses, of which the exhaust rate is high, as they are booked at the entrances to Makkah Al-Mukarramah.

On the other hand, the Presidency of the Two Holy Mosques announced that the atmosphere of the Grand Mosque will be cooled and softened during the Hajj season this year with cool air purified from 100% of germs.

According to a statement by the Presidency of the Two Holy Mosques, the cooling system consumes energy up to 159 thousand tons of refrigeration, and is classified among the largest cooling systems in the world, and pumps its energy through two main stations, which are the largest in the world: the Kudai station and the Shamiya station.