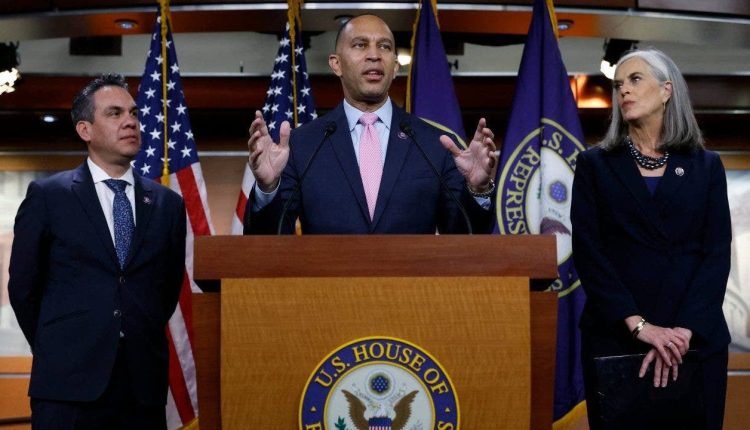 Jeffries made headlines in April 2020 after he broke with his party to lend credibility to the claims made by Reade, a former Biden staffer who accused Biden of cornering her in a Senate office building in 1993 and sexually assaulting her.

Multiple people have corroborated parts of Reade’s story since she first spoke out on March 25, 2020, but Biden and his campaign vehemently denied the claims.

“It’s got to be taken seriously because this is a serious allegation raised by a serious individual and needs to be investigated seriously. We’ve probably got to hear from him [Biden] at some point directly,” Jeffries told WNYC at the time.

Rep. Hakeem Jeffries, D-N.Y., flanked by Rep. Pete Aguilar, D-Calif., and Rep. Katherine Clark, D-Mass., speaks to reporters after they were elected to House Democratic leadership for the 118th Congress at the U.S. Capitol Visitors Center in Washington, D.C., on Wednesday.
(Photo by Chip Somodevilla/Getty Images)

“I’m not really in a position to say what is the appropriate mechanism, although this needs to be taken seriously,” he said.

Reade was one of eight women who came forward in 2019 to accuse Biden of inappropriate touching. She later expanded on her experience with Biden in March 2020, alleging that he once pinned her against a wall and digitally penetrated her without her consent.

Tara Reade poses for a photo during an interview with The Associated Press in Nevada City, Calif., on April 4, 2019.
(AP Photo/Donald Thompson)

BIDEN DODGES QUESTION ON WHETHER HE REMEMBERS TARA READE

Top Democrats downplayed the allegation, despite it coming on the heels of the #MeToo movement. Then-Senate candidate John Hickenlooper made headlines in June 2020 after he said he believed Reade’s allegations “to a large extent” but was going to support Biden for president anyway.

In October 2020, Reade released the book, “Left Out: When the Truth Doesn’t Fit In,” about her experience coming forward with the allegation.

Tara Reade was one of eight women who came forward in 2019 to accuse President Biden of inappropriate touching.
(Darin Hayes Photography)

Jeffries’ office did not respond to Fox News Digital’s inquiry asking whether the New York congressman still agreed that the allegation needs to be investigated or if he would support an investigation in the new Congress.

Jeffries won Wednesday’s uncontested election after Pelosi and the two other incumbent members of the Democratic leadership, Majority Leader Steny Hoyer and Majority Whip Jim Clyburn, opted to step down.

Jeffries, a 52-year-old New Yorker, will be the first African American to serve as House Democratic leader.

Jessica Chasmar is a digital writer on the politics team for Fox News and Fox Business. Story tips can be sent to [email protected]