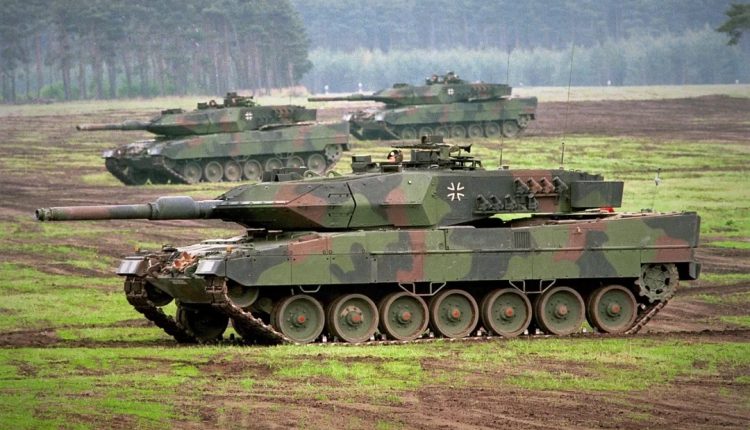 Experts believe that the Leopard 2 heavy tanks, which Germany agreed to deliver to Kyiv on Wednesday after weeks of hesitation, are a weapon with a good global reputation and could have a “significant” impact on the battlefield.

German Chancellor Olaf Scholz allowed Poland and other countries to deliver these tanks to Ukraine from their stocks. The German leader also caused a surprise when he announced the delivery of the most advanced Leopard 2A tanks from the German army’s inventory to Kyiv.

The tank was designed by the German company “Krauss Maffei” and was manufactured on a large scale at the end of the seventies to replace the American “M48” tanks and then the “Leopard 1” tank. The “Leopard 2” combines firepower, ease of movement and safety.

This combat tank, which weighs nearly sixty tons, is equipped with a 120 mm cannon that allows it to target the enemy while moving thanks to its power of 1,500 horsepower, and it is capable of traveling at speeds of up to 70 kilometers per hour.

It is also equipped, according to the manufacturer, with an effective “integrated passive protection” against mines and rocket launchers. Its crew of four benefits from technological tools that allow it to locate and target the enemy at a long distance.

Another major advantage of the tank is its wide availability in Europe, which makes it easier for Kyiv to access the ammunition, spare parts and maintenance required for this type of equipment.

The last four models of the tank are still in use so far, starting with “2A4”, of which Poland offers to give Kyiv 14 pieces, to “2A7”, which Berlin is not willing to give up, preferring to keep them to ensure self-defense.

Thus, Germany, which has a total of 312 pieces of “Leopard 2”, of which 100 are under maintenance, offers to give Ukraine 14 pieces of “2A6”, according to the German press.

This model is equipped with a longer cannon than the cannons of previous versions, and can fire more powerful ammunition with improved accuracy. Also, this type of tank, which was used especially in Afghanistan, has enhanced protection against mines.

As for Finland, which owns more than 200 pieces of “2A4”, according to the International Institute for Strategic Studies, it is also ready to give a number of them to the Ukrainian army.

According to the German press, a number of other European countries and NATO countries are ready to participate in this effort within an alliance formed for the purpose.

Greece has 350 Leopard tanks, as does Turkey, which used it against the Kurdish forces in northern Syria, and the two countries have the largest number of 2A4s.

Questions about the speed of delivery

The best solution is for countries willing to contribute to send 2A4 tanks, as “the unit of the model is very important for training and logistics purposes,” as is the sending of spare parts, former Inspector of the German Land Army General Bruno Kasdorf told RN radio. de”.

In Germany, the armament group “Rheinmetall”, which supplies the “Leopard” tank’s cannon and electronic systems and owns dozens of old models, said it can supply a total of 139 “Leopard” tanks of the 1st and 2nd models. An official spokesperson for it told Radio RND that it would take less than a year to hand it over to Kiev, i.e. by the end of 2023.

Great effect on the battlefield

If Kyiv gets 100 tanks in total, it will have a “significant” impact on the battlefield against the Russians, according to estimates by the International Institute for Strategic Studies.

This will allow Ukraine to “save its energy infrastructure,” according to Ukrainian Foreign Minister Dmytro Kuleba.

The director of “Rheinmetall” Armin Biberger confirmed that the “Leopard 2” tank “enables the army that owns it to penetrate enemy lines and put an end to the long trench warfare.” “With Leopard, soldiers can advance several tens of kilometers at a time,” he added.

Europe.. a side victim of the economic confrontation between Washington and Beijing