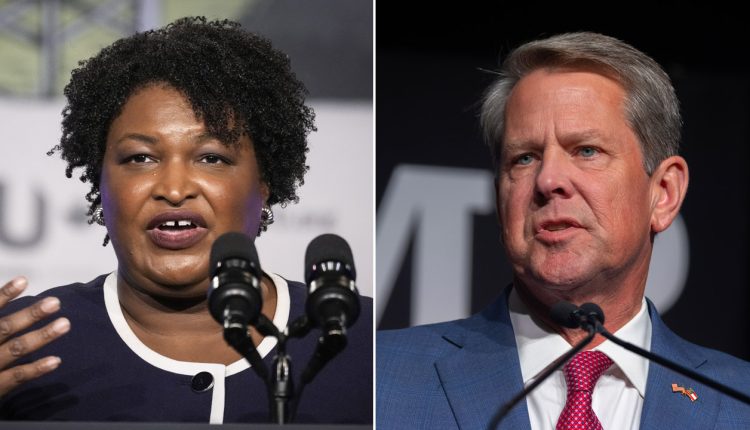 Georgia Republican Gov. Brian Kemp on Thursday called on Stacey Abrams, his Democratic opponent for the 2022 election, to resign from a radical foundation that backs defunding the police.

Abrams serves on the board of the Marguerite Casey Foundation, a Seattle-based grantmaking group, which has also called for abolishing law enforcement. Abrams supported an expanded anti-police initiative from the group shortly after joining its board.

“Stacey Abrams is lying about her own record on public safety – a record that is completely out-of-touch with Georgians,” Reagan McCarthy, deputy communications director for Kemp’s campaign, told Fox News Digital. “Abrams currently serves on the board of a foundation supporting the Defund the Police movement and has profited over $50,000 from the group.”

STACEY ABRAMS SERVES AS BOARD MEMBER, GOVERNOR OF FOUNDATION THAT SUPPORTS #ABOLISHTHEPOLICE

Stacey Abrams sits on the board of a foundation that supports defunding the police.
(Slaven Vlasic/Getty Images)

“Her campaign may be trying to bury her past, but Abrams’ record is abundantly clear at every turn,” McCarthy added. “If she truly supports law enforcement here in Georgia, she should resign her position with the Marguerite Casey Foundation and disavow the radical Defund the Police policies that put officers at risk and families in danger.”

Kemp’s call for Abrams to leave the radical anti-police group follows numerous Fox News Digital reports on her involvement with the foundation.

The foundation also hosted an event in early February titled “Becoming Abolitionists—A History of Failed Police Reforms & Vision for True Public Safety,” which was moderated by the foundation’s president and CEO, Carmen Rojas.

The group has also awarded millions to professors and scholars who advocate anti-capitalist and prison abolitionist views.

STACEY ABRAMS GROUP INCREASED ANTI-POLICE FUNDING SHORTLY AFTER SHE JOINED ITS BOARD, AND WITH HER SUPPORT

The board unanimously gave the green light to a campaign called ‘Answer the Uprising’ just weeks after Abrams had joined the group. The initiative received Abrams’ blessing and involved increased financial support to liberal groups working on law enforcement issues.

“This latest initiative is fully supported by Marguerite Casey Foundation’s Board of Directors, which recently named seven new changemakers to the Board, including Stacey Abrams and Rashad Robinson, President of Color Of Change,” its press release at the time of the announcement said.

The campaign involved $1.6 million more in pledged cash from the Marguerite Casey Foundation to “fund programs and organizations that directly address racial injustice in policing and the justice system.” It also established a coalition with other high-dollar grantmaking organizations that provide backing to defund the police groups.

Stacey Abrams is the Democratic gubernatorial nominee for Georgia. She is running against GOP Gov. Brian Kemp.
(Elijah Nouvelage/Bloomberg via Getty Images)

The Marguerite Casey Foundation has also given grants to left-wing groups that want to defund the police, according to their tax forms.

In 2020, the foundation awarded $250,000 to the Movement for Black Lives, a coalition of more than 50 groups, including Black Lives Matter, that wants to “divest from excessive, brutal, discriminatory policing and invest in a vision of community safety that works for everyone, not just an elite few,” according to its website.

The Marguerite Casey Foundation also gave $200,000 to the Black Organizing Project, which is part of a 13-group committee pushing to defund the Oakland police, in 2020.

That same year, the foundation sent $200,000 to the Louisville Community Bail Fund, which bailed out a Black Lives Matter activist who attempted to assassinate Jewish Democratic mayoral candidate Craig Greenberg in February.