Gaza Strip fishermen have the opportunity to restore their rickety boats 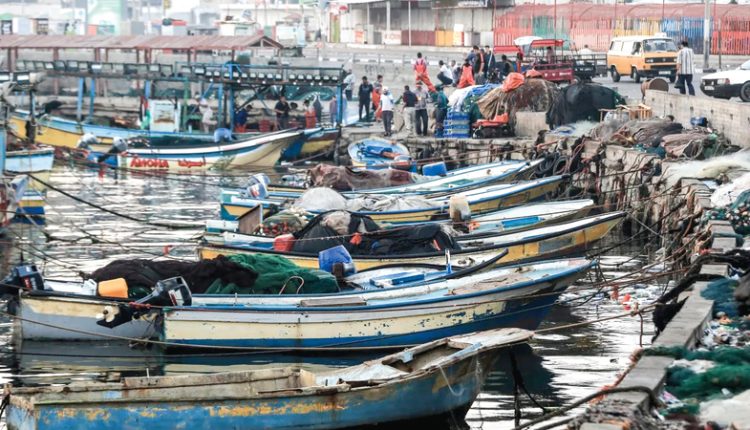 Mohamad Jarbou hastily works to restore a fishing boat in the port of Gaza, nearly 15 years after boat repair work stopped, as a result of Israel’s ban on entering the necessary materials into the besieged Strip.

Jarbou and a team of technicians are facing a major challenge to repair dozens of rickety boats, which are lined up on the sands of the beach west of Gaza City, showing signs of corrosion due to the neglect resulting from the long blockade that began in 2007.

Israel prevents the entry of many materials into the Strip, including boat repair materials, claiming that they can be used for military purposes by the armed Palestinian factions.

The fishermen suffered greatly to repair their boats until the United Nations mediated with the Israeli authorities to allow the supply of fiberglass and its use in the framework of a UN-supervised workshop.

“I started working in this workshop two weeks ago,” says Jarbou, who works in a team wearing a blue uniform and wearing masks. “It is a great achievement for the fishermen and for us as technicians, as it provided us with a job opportunity.”

The team works under the watch of security cameras mounted on a wooden pole, while a newly restored boat smells of dust and pale blue paint.

Israel imposes a tight blockade on the poor and overcrowded Gaza Strip, with a population of about 2.3 million people, and suffers from unemployment of more than 50%, according to World Bank data. 10 boats

Manal al-Najjar, the coordinating officer at the United Nations Office in the Projects Unit, indicates that there are about 300 boats in Gaza that need to be repaired.

Al-Najjar, whose office handles infrastructure projects, says, “Intensive efforts were made by the United Nations with the Palestinian Authority and the Israeli side at the beginning of 2022 to help support the fishing sector.”

And she adds that “on November 13, the first batch of fiberglass was entered to repair 10 boats,” which is a task that takes two weeks to a month to complete.

The coordinating officer explains, “The agreement stipulates that these materials will be entered in succession. Whenever a group of boats is repaired, a second batch of 10 other boats will be entered, under the supervision of the United Nations.

The fishermen get the raw materials at nominal prices, but Al-Najjar confirms that they are of “high quality,” referring to the happiness that overwhelmed the fishermen with the sailing of the first restored boat.

“We have nine boats, but we only have two engines,” says Salim Al-Asi (38 years old), who was lucky enough to be among the beneficiaries of the project, standing by the fishing nets in the port. Some of our boats have been completely out of action for eight years, and they need a lot of fiberglass to fix them.” About 50 relatives of the Orontes work in the fishing profession. “Hundreds of fishermen have applied to benefit from the project, but I fear that not everyone will be covered,” he added.

However, Al-Najjar reassured the fishermen that “the project is continuing and does not only aim to introduce the glass panels and their accessories, but also the engines… We are not only talking about repairing the body of the boat, but about introducing the engines, because many boats need that.”

The disobedient fisherman also describes the suffering of the fishermen because they are prevented from entering the sea except for limited distances.

Israel controls the fishing area by air and sea, which it often shrinks or expands according to security concerns.

The armed factions in the Strip have fought four wars with Israel since 2008, and last August witnessed the last bloody escalation between the two sides.

• Israel prevents the entry of many materials into the Strip, including boat repair materials, claiming that they can be used for military purposes by the armed Palestinian factions.

• Israel imposes a tight blockade on the poor and densely populated Gaza Strip, with a population of about 2.3 million people, and suffers from unemployment of more than 50%, according to data from the World Bank.