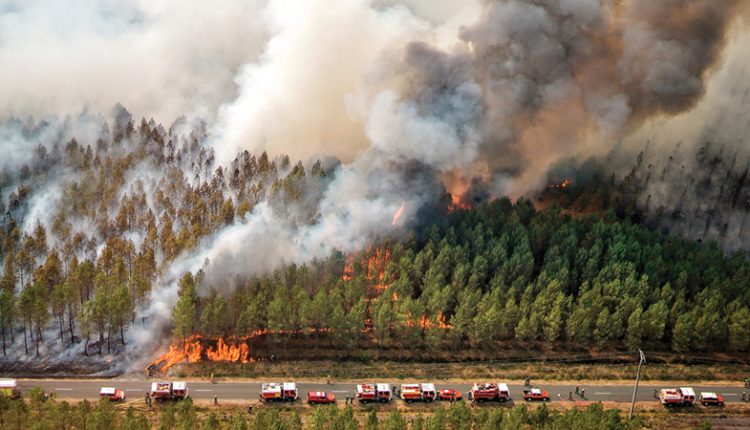 Although the fire season in Europe is not over yet, the initial toll of fires is worsening in the European Union, where more than 660,000 hectares have been burned since last January, a record number for this period of the year since satellite data began to be recorded in 2006.

Since the beginning of January, fires have destroyed 662,776 hectares of forests in the European Union, according to data updated Sunday by the European Forest Fire Information System, which has maintained comparable statistics since 2006 thanks to satellite images of the European Copernicus programme.

France had worse years in the 1970s, before the European consolidated data. But 2022 is the most dangerous in 16 years, according to these numbers, largely due to two consecutive major fires in the Gironde, in the southwest of the country, where German, Polish and Austrian firefighters arrived this week to provide support in putting out the fires.

The situation is also exceptional in Central Europe, where it took firefighters more than 10 days in July to control the largest fire in Slovenia’s modern history, with the help of residents mobilizing themselves to the point that the government had to ask residents to stop donating to the firefighters.

And Slovenia, which does not have aircraft specialized in fighting the fires, requested the help of Croatia, which sent a plane before its recovery to put out its own fires. The Slovenian government is considering buying its first sea-bomber aircraft.

In the German capital, Berlin, a large fire broke out last week from a police ammunition depot in a drought-stricken forest, and was quickly brought under control. Until now, the capital has been spared such fires, but it is increasingly under threat due to its vast forested areas.

But the area hardest hit by the fires is the Iberian Peninsula. Spain, which was dominated by drought like France due to several heat waves this summer, has seen the destruction of 245,278 hectares due to fires, especially in Galicia in the northwest. However, the situation improved as the temperatures fell.

Also, for more than a week, Portugal has been battling a fire in the UNESCO-recognized global geological reserve in the Serra da Estrela mountain region, which has a peak height of about two thousand meters.

“The year 2022 is already a record year” for the summer period alone, Jesus San Miguel, coordinator of the European Information System on forest fires, told AFP. The previous record in Europe dates back to 2017, when fires destroyed 420,913 hectares on August 13, and 988,087 hectares in one year.

“I hope we won’t see a month like October of that year,” when 400,000 hectares were destroyed across Europe in one month, he added.

The exceptional drought in Europe, along with heat waves, contribute to the outbreak of the fires. Extremely dry conditions are often observed in countries bordering the Mediterranean, but Jesús San Miguel noted that “this is exactly what happened in Central Europe”, which until now was considered untouched by these weather phenomena.

For example, the Czech Republic experienced a fire that destroyed more than a thousand hectares, which is insignificant compared to other countries, but 158 ​​times higher than the average between 2006 and 2021 when the fires were negligible.

In Central Europe, the scorched areas are still small compared to the tens of thousands of hectares in Spain, France or Portugal. Besides the fires in Croatia, there were only three fires in Slovenia and five in Austria. But the continuation of global warming in Europe as a whole, will contribute to the escalation of this trend.

• In Central Europe, the scorched areas are still small compared to the tens of thousands of hectares in Spain, France or Portugal.