FIRST ON FOX: Pence heading back to New Hampshire; will Trump hold first 2024 rally in December? 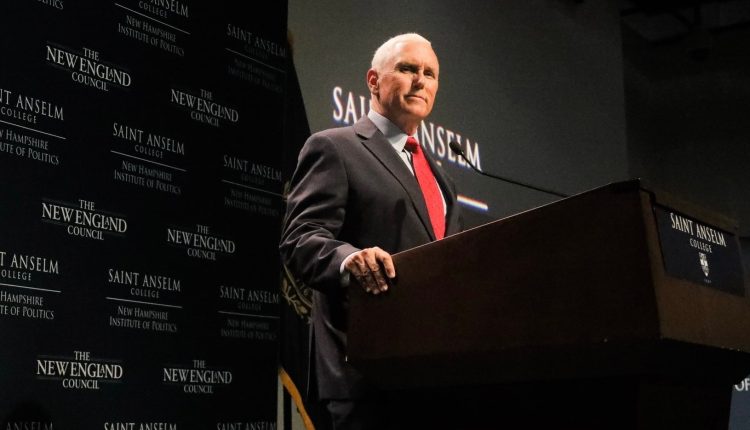 Fox News has learned that, on Dec. 12, Pence will stop in New Hampshire, which for a century has held the first primary on the road to the White House. Pence will host two book signings for his new autobiography “So Help Me God,” in which the former vice president gives an account of his career, including his four years serving under then-President Donald Trump.

Pence, who’s long been a champion for social conservative voters, will hold a book signing in Manchester, New Hampshire, with Cornerstone, a non-profit Christian advocacy organization in the Granite State. And he’ll take part in a second book signing at the Wentworth by the Sea hotel in New Castle with the New Hampshire Federation of Republican Women.

The former vice president, who was busy the past year and a half crisscrossing the country to campaign and help raise money for Republicans running in the 2022 elections, has made multiple stops in Iowa, New Hampshire, South Carolina and Nevada, the first four states to vote in the Republican presidential nominating calendar.

WHAT PENCE TOLD FOX NEWS ABOUT TRUMP’S ANNOUNCEMENT AND 2024

Pence has been making moves, such as building relationships in the early voting presidential primary and caucus states that usually precede the launch of an actual White House campaign.

Those moves include promoting his new memoir, which debuted earlier this month at No. 2 on The New York Times bestseller list, and an accompanying media tour in which he took part in over 40 interviews in the first week of the book’s release. The former vice president’s media tour, which included four separate interviews with Fox News, kicked off with a sit-down with ABC World News Tonight, which helped boost the nightly network newscast to its most watched telecast in eight months.

Pence is also starting to staff up ahead of his likely presidential bid, last week hiring a new communications director for his aligned non-profit organization Advancing American Freedom. More hires, including fundraising aides, are expected early in the new year.

And the former vice president spoke and held meetings last weekend in Las Vegas at the Republican Jewish Coalition’s annual leadership meeting. The confab, which each year draws top GOP leaders, top-dollar donors and activists from across the nation, was seen as the first major Republican cattle call in the burgeoning 2024 White House race.

Pence, in an interview with Fox News Digital on the sidelines of the conference, reiterated that a decision on whether he’ll run for president won’t come until next year and added that he and his wife Karen will “make a decision wherever we feel called.”

And Pence, interviewed just three days after Trump launched his latest White House campaign, emphasized that Trump’s move will not be a factor in his own decision regarding a presidential run.

“The only decision Karen and I have made is we’re not going to let anybody else make the decision for us. Look, it’s a free country. President Trump had every right to announce his intention to seek election as president … but for us as a family it really is all about calling.”

Pence in recent weeks has repeatedly said Republicans will have “better choices” in the 2024 nomination race than the former president.

And in his Fox News Digital interview in Las Vegas, he hinted that Trump’s constant re-litigating of his 2020 election loss to Joe Biden may have contributed to the Republican Party’s lackluster performance in this month’s midterm elections.

The GOP failed to win a Senate majority, lost key governors races and secured a razor-thin majority in the House of Representatives, far lower than expected in what was supposed to be a “red wave” in the midterm elections.

A number of Republicans have criticized the former president for boosting far-right MAGA style candidates who supported Trump’s unproven claims the 2020 election was stolen. Those candidates won GOP primaries but ended up losing in high-profile competitive general election showdowns.

Pence said the common denominator in the midterms was that “candidates focused on the future did well. Candidates that focused on the past or relitigating the past did not fare as well.” Asked if Trump deserved some blame, the former vice president answered, “I would say my former running mate was one of the people talking about the past, and it was not helpful.”

Trump has told aides and advisers that he’d like to do two rallies in the month of December.

“He wants to be relevant going into the holiday season but doesn’t think he can be out campaigning every day,” an adviser in Trump’s political orbit who asked to remain anonymous to speak more freely told Fox News.

A different source with knowledge of the former president’s thinking said that discussions for rallies next month are underway but that nothing’s set in stone. The source added that a couple of sit-down, on-camera media interviews are being planned.

Former President Trump speaks during an event at his Mar-a-Lago home Nov. 15, 2022, in Palm Beach, Fla. Trump announced he was seeking another term in the White House and officially launched his 2024 presidential campaign.
(Joe Raedle/Getty Images)

Another source in Trump world argued that this month’s announcement was “hastily planned” and that “there’s nothing going on.” The source told Fox News that “to say that there’s disappointment in the launch by people that support the president is an understatement. It was very underwhelming.”

Unlike his campaign launch for his 2016 run for the White House — he quickly made stops in the early voting primary and caucus states after declaring his candidacy in June 2015 — this time around, Trump has yet to follow up his Nov. 15 announcement with any campaign-style events.

Trump on Thursday will take part in a Palm Beach, Florida, event hosted by the for-profit America Freedom Tour.