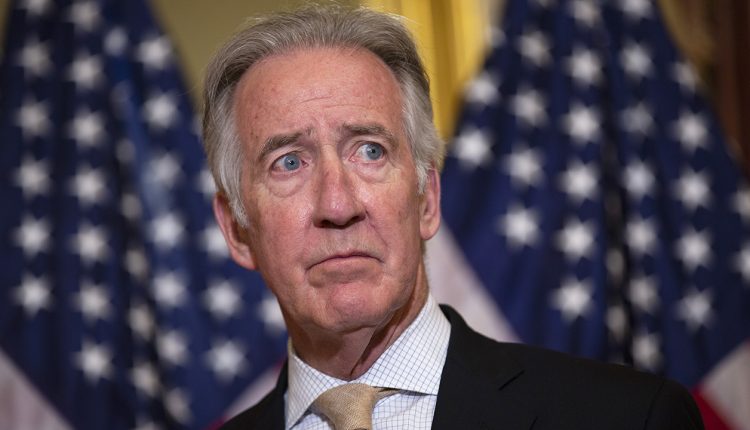 Democratic Rep. Richard Neal of Massachusetts suggested that the House would increase tax rates if his party remains in power following the upcoming midterm elections this fall, according to a congressional reporter.

Neal, the chairman of the House Ways and Means Committee, said Democrats, should they keep power in the House, will look to raise corporate and individual tax rates in 2023, according to a Bloomberg reporter.

The Inflation Reduction Act, a social spending and tax increase measure that is expected to pass in the House on Friday, includes a proposed expansion of the Internal Revenue Service (IRS).

Rep. Richard Neal, a Democrat from Massachusetts and chairman of the House Ways and Means Committee, listens during a bill enrollment ceremony on Capitol Hill in Washington on June 21, 2019.
(Stefani Reynolds/Bloomberg via Getty Images)

The expansion includes an $80 billion boost to the IRS over a 10-year period, with more than half intended to help the agency crack down on tax evasion.

If the bill is passed, the money allotted would go toward filling 87,000 IRS positions, more than doubling the agency’s current size. The Treasury Department says some of the new hires would replace 50,000 employees who are expected to retire in the next five years.

The measure passed in the Senate on Sunday along party lines, with Vice President Kamala Harris casting a tie-breaking vote, after it was introduced last month and agreed upon by Sen. Joe Manchin, D-W.Va., and Senate Majority Leader Chuck Schumer, D-N.Y.

President Biden repeatedly pledged on the campaign trail to not raise taxes on Americans earning less than $400,000.

President Biden speaks from the Blue Room Balcony of the White House in Washington on Aug. 1, 2022.
(Jim Watson/Pool via AP, File)

Earlier this week, during an appearance on CNBC’s “Squawk Box,” White House economic adviser Jared Bernstein was questioned about the impact the Inflation Reduction Act will have on taxpayers and whether the IRS agents that get hired would audit individuals making less than $400,000 a year.

“I want to be clear, is the president guaranteeing nobody making under $400,000 will be audited [by the new agents]?” asked host Brian Sullivan.

“No, no, no. That’s not what I said,” Bernstein responded. “Nobody making under $400,000 will pay higher taxes under the Inflation Reduction Act.”

“If they are doubling the size of the IRS, then who are they going to go after?” asked Sullivan, while also mentioning small businesses.

Jared Bernstein, member of the Council of Economic Advisers, speaks during a news conference in the James S. Brady Press Briefing Room at the White House in Washington on July 18, 2022.
(Yuri Gripas/Sipa/Bloomberg via Getty Images)

Bernstein did not answer the question regarding who the extra IRS agents would audit, and instead restated his pledge that people making under $400,000 per year will not pay more in taxes.

Fox News did not receive an immediate response from Neal’s office.