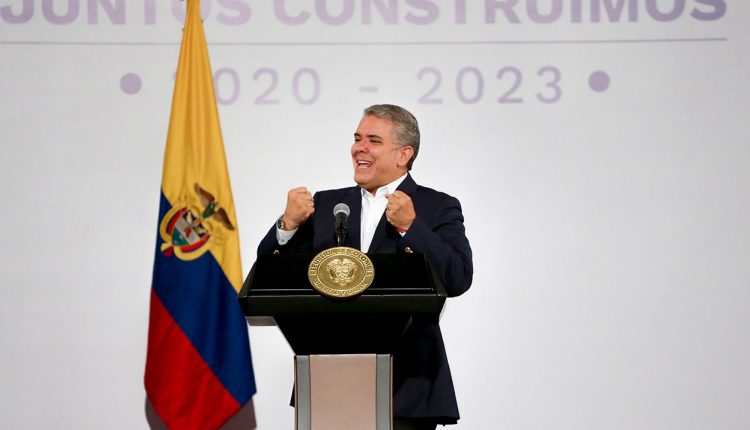 Colombia’s former President Ivan Duque warned that his successor’s efforts to legalize cocaine would turn Colombia into a “narco state” that could threaten the security of the United States and other countries “in the hemisphere.”

“Now, what worries me is that there is now the possibility of getting into the permission, or the legalization of cocaine and consumption,” Duque, who had been in New York to attend the Concordia Summit, told Fox News Digital. “I think that it will be very bad for Colombia and that will be very bad for the countries in the hemisphere, and I think that could generate also a major security threat to the United States.”

Duque, who left office in August, continued: “So by no means I’m in favor of the legalization of the cocaine trade … But I also have to say it, Colombia cannot turn into a narco state. I think the world now has unified in the concept of prohibition, and I think if just one country, let’s say Colombia, decides to legalize cocaine, it’ll turn itself into a narco state.”

In contrast, Duque cited his administration’s “holitic approach” to the challenges of illegal drugs, from the highest drug seizures ever, to extradition, to health care policies to treat addicts.  He further called on more being done to curb demand “in the countries where the consumption of the game has spiked.”

The party of current President Gustavo Petro has considered the idea of legalizing cocaine as an effort to shift away from what some call the “irrational” war on drugs. Petro, Colombia’s first left-wing president and a former guerilla leader, called for a “new international convention” during his inaugural speech, claiming “the war on drugs has failed.”

HUMAN RIGHTS VIOLATIONS CONTINUE IN VENEZUELA, ACCORDING TO UN EXPERTS

According to an Office of National Drug Control Policy estimate, Colombia in 2020 was the world’s leading producer of cocaine, cultivating more than the two closest nations, Peru and Bolivia, combined.

During his address to the United Nations General Assembly, Petro stated “The war on drugs has failed.”

“What is more poisonous for humanity, cocaine, coal or oil?” Petro said. “The opinion of power has ordered that cocaine is poison and must be persecuted, while it only causes minimal deaths from overdoses…but instead, coal and oil must be protected, even when it can extinguish all humanity.”

President Duque also addressed border security and the crisis on the U.S. southern border. He said one way to help solve it would be to bring greater investments to the Americas. “Bringing those investments here will create jobs, will create opportunity, will create aggregated value chains and I think that could disincentivize the pressure on the southern border of the United States.”

He noted that the focus on climate change as a major issue means that Colombia must adapt or suffer in the long-term. He explained that 40% of Colombia’s exports come from oil and gas, with much of the national profit derived from taxation of and foreign investment in that sector.

He insisted that Colombia can be a leader in pursuing alternative fuels, but that the issue is “not a matter of black and white.”

“There’s a transition going on and Colombia can turn itself in the next decade into an exporter of green hydrogen, but so far, we need to keep the balance of doing a good job when it comes to oil and gas in terms of exports on production,” Duque argued. “At the same time, we need to keep on expanding on non-conventional renewable energies.”

“I think we have to continue becoming leaders in the energy transition with non-conventional renewable energies, but we need to keep … the conventional energy that is a source of funding for the social programs that we have in Colombia,” he said.

Oil also provides Venezuela with power and wealth, which it uses to build ties to nations such as Russia and Iran. Duque warned that Russian President Vladimir Putin sees Venezuela as a “mechanism to destabilize the Western Hemisphere,” with Putin having said he also sees Colombia as “a future strategic partner.”

“I condemned it when I was president. And we also expelled spies, Russian spies from the Colombian territory, and I think we need to keep on demonstrating [to] the world of that interest that Russia has in Venezuela,” Duque said.

“So I have been clear, and I can say it again, that intention of Russia, of using Venezuela as … the point of entrance to try to destabilize the region has to be very clearly denounced, and [Putin] has to receive also a message that he cannot mess with the Western democracies.”  Duque also called for Putin being “tried by the International Criminal Court” for his actions involving Ukraine.

Former President Duque also discussed new projects that he is overseeing since leaving office. One such project he said was to help revive the Amazon in a project known as the Amazon Initiative which is a way to revive and sustain the area.

During the interview Duque also discussed the influence China plays on the continent, the appeal of leftism in Latin America, pro-market economic reforms, the war in Ukraine, and the National Liberation Army, a designated foreign terrorist organization by the U.S. Department of State.