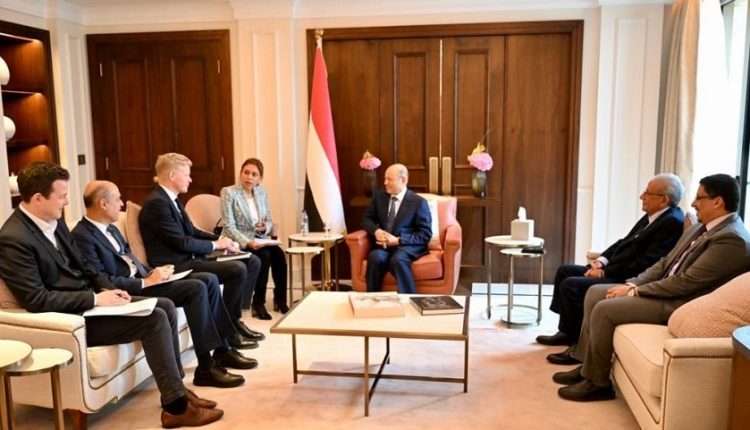 The head of the Yemeni Presidential Leadership Council, Rashad Al-Alimi, discussed in the Jordanian capital, Amman, with the UN envoy to Yemen, Hans Grundberg, the international efforts coordinated with the regional and international community to revive the peace process in Yemen.

According to the official Saba agency, Al-Alimi affirmed the commitment of the Presidential Council and the government to the peace approach based on the references agreed upon nationally, regionally and internationally.

Al-Alimi stressed, during his meeting in Amman, with the head of the European Union mission, Gabriel Munuera Viñals, and the Ambassador of the Federal Republic of Germany to Yemen, Hubert Jaeger, to be cautious about any transactions or transfers to militia areas outside the scope of approved exceptions.

According to Saba Agency, Al-Alimi put the two European ambassadors before the repercussions of the Houthi terrorist attacks on the oil sector, freedom of global trade and international peace and security, stressing that punitive measures against militias do not mean closing the door to good offices for peace and stability in Yemen.

In the Omani capital, Muscat, the US envoy to Yemen, Tim Lenderking, discussed with the Omani side the efforts exerted to support the Yemeni parties to reach a political solution that achieves security and stability for brotherly Yemen and the countries of the region.

On the ground, the Yemeni forces stationed in the Shabwa governorate raised their combat readiness to confront the Houthi threats, which affect the oil facilities and ports in the governorate.

Field sources stated that the Giants forces and Shabwa Defense have raised readiness and combat readiness to face any challenges aimed at undermining the security and stability of the province, foremost of which is the response to the Houthi attacks that threaten oil installations, services and ports.

In Taiz, the militias renewed their bombing of civilian and military sites on the northern, western and eastern fronts, which prompted the Yemeni army and the resistance to respond to the attacks by bombing and destroying Houthi weapons sites and positions.

In the “Tura” obstacle between the governorates of Al-Bayda and Abyan, the southern and joint forces were able to repel Houthi attacks in the area, and the forces stationed in the area forced the attacking elements to flee after the militias suffered heavy losses in their combat equipment.