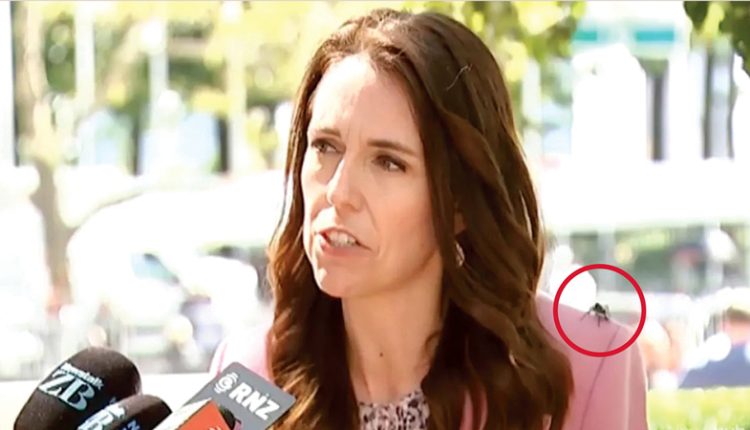 A large insect appeared on the shoulder of New Zealand Prime Minister, Jacinda Ardern, while addressing a press conference in New York, on Tuesday evening, and crawled from her back to her shoulder, and the insect appeared to be crawling through Ardern’s hair, before disappearing behind her head. At that moment, the audience heard a reporter screaming, warning Ardern, “There’s a bug on your shoulder, about to reach your neck.” She asked Ardern calmly, before flicking the bug away, “Is it right on the shoulder?” Time to crawl over me quietly.”

Ardern is an unlucky politician, whose bugs have found an opportunity to crawl on their bodies. Among these politicians is former Philippine President Rodrigo Duterte, who found a large cockroach crawling on his shirt while giving a speech at a campaign rally, prompting his critics to mock the rude leader on social media.

Former President Barack Obama was at a press conference at the White House on June 7, 2009, when a fly landed on him, harassing him, and diverting his attention away from what he was giving to reporters, but the president showed ingenuity in an impressive hand-eye coordination And he kept watching her silently as she landed on his hand, before hitting her quickly and killing her with his other hand. After killing her, he turned toward the audience, saying, ‘That was impressive, wasn’t it? I defeated her.”

During a live talk by former Vice President Mike Pence, prior to the 2020 election, viewers saw a fly over his head, landing on him, and remaining there for two minutes, which was enough to divert attention from what Pence was talking about, and Pence seemed oblivious or perhaps even pretended, This moment remained in the memory forever, because of what some called “Flygate”, in reference to the famous “Watergate” scandal.