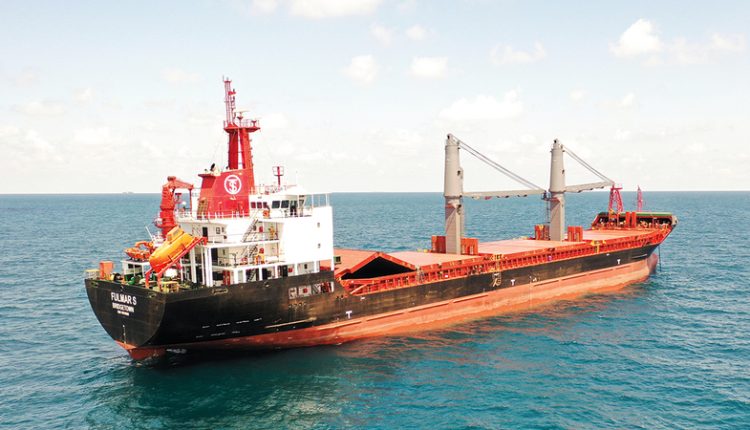 Three ships laden with grain left Ukrainian ports yesterday, while the first incoming cargo ship since the start of the Russian war is scheduled to arrive in Ukraine later, as Kyiv called for the safe passages agreement to be expanded to include other products, such as minerals.

In detail, the Minister of Infrastructure of Ukraine, Oleksandr Kobrakov, said that three cargo ships loaded with grain left the Black Sea port of Odessa, and the neighboring port of Chornomorsk, early yesterday morning.

“The first convoy carrying Ukrainian grain has sailed from the major ports of Odessa,” Kobrakov added.

“We expect that the security guarantees provided by the agreement’s partners, the United Nations and Turkey, will continue to be in force, and thus the process of food exports from our ports will be stable and predictable for all market participants,” Ukraine’s infrastructure minister said on Facebook after the ships left.

It was reported that the ships carried 57 thousand tons of corn.

According to reports, the ships are: the Turkish tanker Polarent, the Panama-flagged Navy Star, and Malta-flagged Rogan.

According to the Ukrainian authorities, the ships will first arrive in Istanbul for inspection, and then in Britain and Ireland.

The Turkish Defense Ministry said the Barbados-flagged ship Vollmar had left Istanbul for Chornomorsk after being searched.

The July 22 agreement is a rare diplomatic breakthrough as war rages in eastern Ukraine and Kyiv attempts to rebuild its devastated economy after more than five months of conflict.

Ukraine’s Deputy Economy Minister Taras Kachka told the Financial Times that “this agreement concerns logistics and ship movement across the Black Sea… What is the difference if the shipment is grain or iron ore?”

The Kremlin said a solution could only be found if it was contingent on lifting restrictions on Russia’s mineral producers. The United Nations and Turkey brokered the safe transit agreement between Moscow and Kiev, after UN warnings of the outbreak of famine around the world due to the suspension of grain shipments from Ukraine.

The Turkish Defense Ministry said that two ships carrying grain had moved from the ports of Chornomorsk and Odessa, carrying about 58,000 tons of corn in total.

The Odessa local administration said the Liberian-flagged Turkish tanker Osprey S is expected to arrive in Chornomorsk to load grain. Russia and Ukraine usually produce about a third of the world’s wheat production, and Russia is Europe’s main energy supplier. But Russia said yesterday that it may not reach its expected harvest of 130 million tons of grain due to weather factors and a lack of spare parts for foreign equipment.

After five months of fighting, Ukrainian President Volodymyr Zelensky this week described the pressure on his armed forces in the eastern Donbass region as “hell”.

Moscow seeks control of the predominantly Russian-speaking Donbass region of Luhansk and Donetsk, where pro-Moscow separatists seized control of areas after the Kremlin annexed the southern Crimea peninsula in 2014. Zelensky spoke of fierce battles around the town of Avdiivka and the fortified village of Pesky, Ukraine has admitted that the Russian military has achieved “partial success” in the past few days. Russia’s TASS news agency quoted the separatist forces as saying that Russia and its allied forces had fully taken control of Peske. She also said the fighting was taking place in the city of Pakhmut, north of Donetsk.

Ukraine has spent the past eight years fortifying defense posts in Pesci, viewing it as a buffer against Russian-backed forces who control Donetsk city, about 10 km to the southeast. Russian news agencies, quoting the Defense Ministry, said yesterday that its forces had destroyed two US M-777 howitzers in the Zaporizhia region of Ukraine.

Meanwhile, Amnesty International, in a report, enumerated incidents in 19 cities and towns in which Ukrainian forces appeared to have put civilians at risk by stationing themselves in residential areas.

In his evening speech, Ukrainian President Volodymyr Zelensky considered the accusations as holding the victim responsible, saying that human rights groups sought to “provide amnesty to the state of terrorism (Russia), and shift responsibility from the aggressor to the victim.”

“No circumstance, even in theory, justifies any Russian strike on Ukraine,” he added. Aggression against our state is unjustified, an invasion. If someone makes a report in which they somehow equate the victim with the aggressor, and if some data on the victim is analyzed and the aggressor’s actions are ignored, this is untenable.”