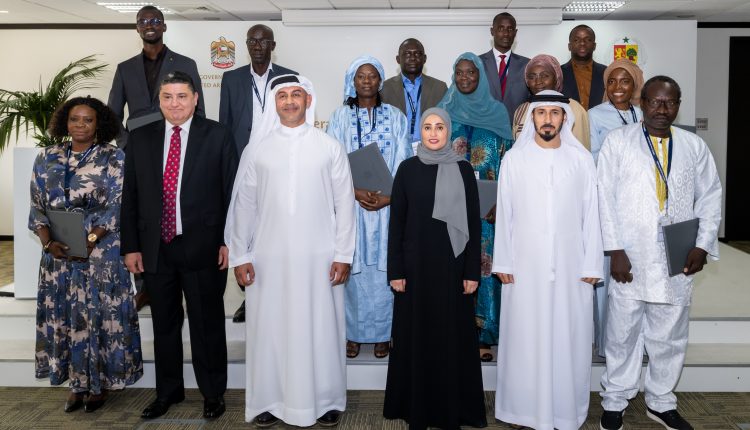 The UAE government, in cooperation with the Mohammed bin Rashid School of Government, held a series of training workshops for government leaders in the Republic of Senegal, entitled “The Government of the Future”, within the framework of the Memorandum of Understanding for bilateral cooperation in the areas of government modernization and development.

Her Excellency Ohoud bint Khalfan Al Roumi, Minister of State for Governmental Development and the Future, honored the participants in the training workshops, in the presence of Abdullah Nasser Lootah, Director General of the Prime Minister’s Office at the Ministry of Cabinet Affairs, and Dr. Ali bin Sebaa Al Marri, CEO of the Mohammed bin Rashid College of Government Administration.

The workshops, which were supervised by the UAE Government Leaders Program and the Mohammed bin Rashid School of Government, focused on building the capacities of Senegalese leaders in the areas of leadership and management of institutions, public policies, digital transformation in government, government services, the role of international organizations programs and competitiveness reports in developing economic policy. A number of Senegalese government leaders in the Ministries of Interior, Health, Social Work, Justice, Finance and Budget, Public Service and Public Service Modernization, Education, Labor, Vocational Training and Integration, the Judicial Training Center, and the National School of Government Administration participated in it.

Abdullah Nasser Lootah, Director General of the Prime Minister’s Office at the Ministry of Cabinet Affairs, stressed the keenness of the UAE government to strengthen its constructive global partnerships in government modernization, which would contribute to empowering future governments and enhancing their readiness by benefiting from the country’s experiences in government administration.

He said that the bilateral cooperation in government modernization between the UAE and Senegal represents a successful model for constructive global partnerships aimed at sharing experiences, knowledge and ideas to develop government work, qualify leadership cadres and build their capabilities, noting that building the capabilities of government leaders supports the process of development and development, and contributes to the consolidation of a new generation of governments that Leading communities in the journey of creating and designing the future.

Dr. Ali bin Sebaa Al Marri, CEO of the Mohammed bin Rashid School of Government, stressed that the college, in cooperation with the government of the UAE, is constantly seeking to employ its capabilities and expertise to support and enhance the work systems of various governments in the region and the world, based on the best experiences of the UAE model in modernization. And government development, which has proven its efficiency in dealing with various global changes, keeping pace with technological developments and foreseeing the future.

He added: “The college works based on its role in qualifying and refining the expertise of government leaders with the latest practices aimed at achieving the strategic goals of governments. developing in the coming period.

A number of specialized workshops were organized within the axes of the training program, focusing on raising government efficiency in crisis management and leadership, managing institutions and innovation in government services, and employing modern technology to accelerate digital transformation and policy-making and legislation.

It is worth noting that the “Government Knowledge Exchange Program”, launched by the UAE government and supervised by the Ministry of Cabinet Affairs, aims to strengthen global partnerships to exchange knowledge, experiences and successful experiences in the areas of government work, to chart future paths and devise proactive solutions to the challenges that governments will face by taking advantage of One of the exceptional experiences developed by the UAE in government administration.