The President and the King of Jordan discuss brotherly relations, cooperation and joint action 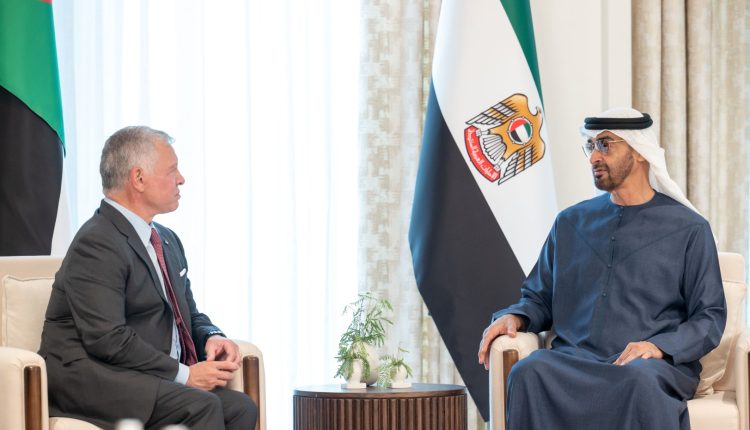 His Highness Sheikh Mohamed bin Zayed Al Nahyan, President of the State, may God protect him, and King Abdullah II bin Al Hussein, King of the sisterly Hashemite Kingdom of Jordan, discussed today the brotherly relations between the two countries and paths of cooperation and joint work in various aspects that serve their mutual interests..

This came when His Highness received – at the Beach Palace – his brother King Abdullah II, where he welcomed him, expressing his wishes for good health and happiness and for brotherly Jordan and its people continued progress, progress and prosperity under his leadership..

His Highness and King Abdullah reviewed the prospects for cooperation between the two countries and opportunities for its development in various political, economic, investment and development fields and worked to push them forward during the next stage in order to achieve the common interests of the two countries..

On the Jordanian side, it was attended by Dr. Bishr Al-Khasawneh, Prime Minister of Jordan, Ayman Al-Safadi, Deputy Prime Minister and Minister of Foreign Affairs and Expatriates Affairs, Dr. Jaafar Hassan, Director of the King’s Office, and Nassar Habashneh, Ambassador of the Hashemite Kingdom of Jordan to the country.

King Abdullah II bin Al-Hussein left the country, where His Highness Sheikh Mohammed bin Zayed Al Nahyan, President of the State, may God protect him, was in his farewell.

The President and the King of Jordan discuss brotherly relations, cooperation and joint actionhttps://t.co/898yUFIYMm#statement_reader_always pic.twitter.com/VumSYejJLb