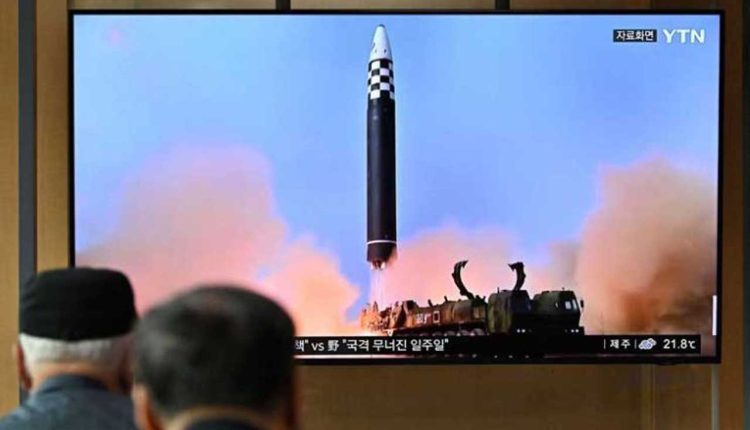 North Korea on Tuesday morning launched a medium-range ballistic missile that flew over Japan before falling into the sea, in an unprecedented event since 2017, prompting Tokyo to activate the warning system and ask residents of some areas to take cover.

The last time a North Korean missile flew over Japan dates back to 2017, at the height of the “fire and fury” phase, during which North Korean leader Kim Jong-un and US President Donald Trump threw heavy insults at the time.

Tokyo, for its part, confirmed that the test had taken place, and in a rare event, activated the missile warning system and asked residents to take cover.

Japanese Prime Minister Fumio Kishida was quick to condemn the missile’s flight over his country’s territory.

“A ballistic missile most likely crossed over our country before falling into the Pacific Ocean,” Kishida told reporters. “It is an act of violence that comes after recent and repeated launches of ballistic missiles. We strongly condemn this.”

On Tuesday morning, the South Korean military announced that it had “detected a hypothetical medium-range ballistic missile.

This constitutes a clear escalation in the intensive military testing campaign that Pyongyang has been conducting since the beginning of the year.

“The specific details are subject to in-depth analysis in cooperation with the United States and the international community,” the South Korean military said in a statement.

In response to Pyongyang, South Korean and US fighter jets on Tuesday conducted precision bombing exercises with two F-15K warplanes firing two bombs at a hypothetical target in the Yellow Sea, the South Korean military said.

The Joint Chiefs of Staff in Seoul said the exercises were aimed at demonstrating “the (allies’) capabilities to deliver a precise strike to the source of provocations.”

There are about 28,500 US troops in South Korea to help it protect itself from the North.

On the European side, the President of the European Council, Charles Michel, condemned “strongly” in a tweet, “a deliberate attempt to endanger the security of the region.”

Japanese Defense Minister Yasukazu Hamada suggested that the missile was a “Hwasong-12”, which was previously launched by Boeing Yang in the last two times that a missile flew over Japan. If this is confirmed, it will set a new record in the distance the missile traveled, which Tokyo estimates at about 4,500 km.

And Pyongyang, which has nuclear weapons, conducted this year a series of tests unprecedented in terms of pace.

In particular, it launched an intercontinental ballistic missile for the first time since 2017 and amended its legislation to make its status as a nuclear-weapon state “irreversible”.

On September 30, Seoul, Tokyo and Washington conducted a tripartite anti-submarine drill, the first of its kind in five years. The exercises came days after large-scale exercises conducted by the US and South Korean navies off the peninsula.

North Korea, which is under UN sanctions because of its banned weapons programmes, usually tries to conduct its military tests at a time that increases its geopolitical impact.

“If Pyongyang launches a missile over Japan, it could represent a significant escalation compared to its recent provocations,” said Leif-Eric Easley, a professor at the University of Iowa in Seoul.

“North Korea always starts with a low-level provocation and gradually raises the level to attract the attention of the world media,” said Go Myung-hyun, a researcher at the Asan Institute for Policy Studies. “By launching the missile over Japan, they are showing that their nuclear threat is not only aimed at South Korea,” he added.

Recently, US and South Korean officials warned that North Korean leader Kim Jong-un is preparing to conduct a new nuclear test.
South Korean intelligence has reported that this nuclear test may take place during the period between the Chinese Communist Party Congress on October 16 and the midterm elections in the United States on November 7.

Concern is growing about North Korea’s possession of nuclear weapons because, unlike other nuclear powers, it does not consider these weapons to be a deterrent force only and should not be used at all.
Boeing Yang has conducted six nuclear tests since 2006, the last of which was the most powerful in 2017.