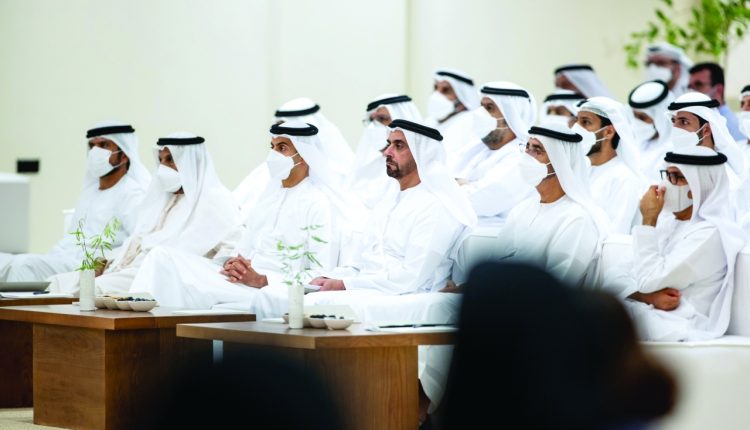 The lecture, which was held at the Mohammed bin Zayed Majlis at Al Bateen Palace in Abu Dhabi, was attended by Lieutenant-General Sheikh Saif bin Zayed Al Nahyan, Deputy Prime Minister and Minister of Interior, and Her Excellency Maryam bint Mohammed Saeed Hareb Al Muhairi, Minister of State for Food and Water Security, in addition to a number of senior officials. Officials and members of bodies concerned with food and agricultural security.

The lecture focused on 5 main axes: the significant impact of agriculture on human life over the past 12 thousand years, the annual sales volume of the global agricultural technology sector, the great progress made by humans in making agriculture possible without arable land, and the role of agricultural technology in feeding 10 billion people more sustainably by 2050, and the UAE’s ability to accelerate reaching this goal by building high-quality ecosystems to be a regional hub for innovation.

Stuart Oda, entrepreneur, urban agriculture expert, founder and CEO of Aliska Life, said that the UAE, thanks to the vision of its wise leadership, and its ambitious initiatives and strategies, and a competitive education system to continue to support and nurture local talent, has become today an inspiration for the next generation of Innovators of agricultural technology, a global hub for innovation, and one of the most important leaders in the global agricultural technology sector.

He added that the UAE has launched an integrated package of qualitative and exceptional initiatives to attract entrepreneurs, investors and partners to lead the next wave of technological development and agricultural commercial marketing, as the UAE has many key components to attract talent and great companies.

Which will contribute to achieving a competitive national economy based on knowledge, innovation and future technological applications that integrate modern technologies in the agricultural field, as well as building vibrant ecosystems by supporting early growth stage companies committed to real innovation in the field of agricultural production.

He noted that the UAE has announced its commitment to becoming the safest country for food in the world by 2051 by developing a comprehensive national strategy and roadmap to achieve this ambitious goal.

It also launched several acceleration programs and competitions for startups that had a major role in increasing innovations and the flow of local technical talent and international experts, pointing out at the same time that these factors will enable Emirati agricultural technology companies to export their solutions to countries in the region, during the next few period.

Stuart Oda said: “I am an investment banker turned farmer, and this came after more than 10 years ago I embarked on research and learning about the journey that food takes to reach supermarkets and homes around the world, which was the first step in my personal launch into the tech industry. Agriculture, where my team and I have developed modular small vertical farms over the past several years.

He stated that agricultural technology has a unique opportunity not only to contribute to food security by enabling local food production, but also to other sectors including biodiversity, space exploration and health care, especially since many plants have been used as treatment and medicine for thousands of years.

He explained that the origins of human agriculture can be traced back 12,000 years to the Fertile Crescent, a region north of the United Arab Emirates, where the discovery of agriculture ended countless cycles of mass migration in search of food and basic necessities, and allowed civilization to flourish.

He touched on the role of jobs and services that contemporary life resulted in emigration and leaving millions of people working in fields related to agriculture and directing them to other fields, providing an example of what the United States of America witnessed in this regard, where workers working in agriculture in the nineteenth century constituted what 90%, while this percentage has decreased at the present time to 1.4%.

In response to a question about what agriculture looks like today, he said: Agriculture is a huge global industry that includes everything from genetics and production to logistics and retail, adding that the reality today is that only 5 countries are responsible for producing the majority of basic crops that include more than 30 different species. of fruits, vegetables, nuts, dairy products, and other food products.

He pointed out that there are 4 common things that enhance the capabilities of the five food-producing countries, including pleasant weather, abundant employment, abundance of arable land, and diversity and abundance of resources, noting at the same time that the five largest agricultural producers are home to

43% of the world’s population, they have access to 78% of all available arable land, and they own 32% of the total value of natural resources on the planet.

According to the statistics presented during the lecture, the global output of the value of the agricultural chain is about 20 trillion dollars, lagging behind the GDP of the United States of America and exceeding the GDP of the People’s Republic of China.

According to the figures, the financial value of food production around the world constitutes the fifth largest global economy at $3.7 trillion, while food waste alone ranks 15th with $1.2 trillion, and the economic value of waste is an opportunity worth $1 trillion.

Stuart Oda indicated that the negative secretions left by agriculture on our current world represented in its use of 49% of the habitable land mass, 30 times more than all areas developed for human settlements and 72% of the fresh water on Earth, and caused by 26% of greenhouse gas emissions. Global warming, and the ever-increasing global population, has created an urgent and significant need to develop more sustainable and climate-resilient methods of production and processing.

And he indicated that the housing increase represents one of the most important future challenges that societies and countries will face in the coming years, as expectations indicate that the world population may reach about 10 billion people in 2050, with two out of every three people residing in urban city centres, adding that In order to feed this huge population we will need to increase our agricultural production by 70% over current levels, which means we will need to grow more food than the previous 12,000 years combined.

Stuart Oda continued: “The updated agricultural technology has succeeded in giving us a great glimmer of hope, especially in light of the efforts made by agricultural technology companies, including scientific researchers, engineers and programmers, who all worked to combine their skills, experience and passion to meet these challenges.”

These companies have adopted various models for developing agricultural technology, including the use of indoor vertical farms, which grow fresh produce in controlled environment facilities using shelves that can extend from 14 to 16 floors, enabling factories to grow hundreds of crop varieties all year round regardless of The amount of arable land available or the climate of the area.

He noted that indoor vertical farms can grow more than 300 times more food per square meter while using up to 99% less water and no chemical pesticides compared to traditional farms.

He explained that these achievements came as a result of the entry of many investors and businessmen during the past 10 years to the agricultural technology industry sector, who spent more than 200 billion dollars in this vital sector.

On the role of advanced technology in reducing and facilitating human life, Stuart Oda said: Today computers and smartphones have 1,000 to 12,000 times greater processing power than it was 10 to 15 years ago, and in the field of health care, the cost of sequencing the human genome has decreased from $1 billion in 2013 to less than $1,000 now.

While genome sequencing now takes one to two days compared to the 13 years in which it was first attempted, pointing out that this development had a positive and decisive impact in our race to develop a “Covid 19” vaccine in record time.

Stuart Oda said that agricultural technology will play a more important role in enabling space exploration and colonization for humanity, as space needs engineers, doctors and farmers, not accountants, consultants or lawyers, adding:

Just 10 years ago, there might have been a great deal of concern about how to feed 10 billion people by 2050, but the agrotech sector is on its way to building solutions to feed everyone more sustainably and equitably here on Earth, with the potential to build settlements outside the land that feed the population. those planets.