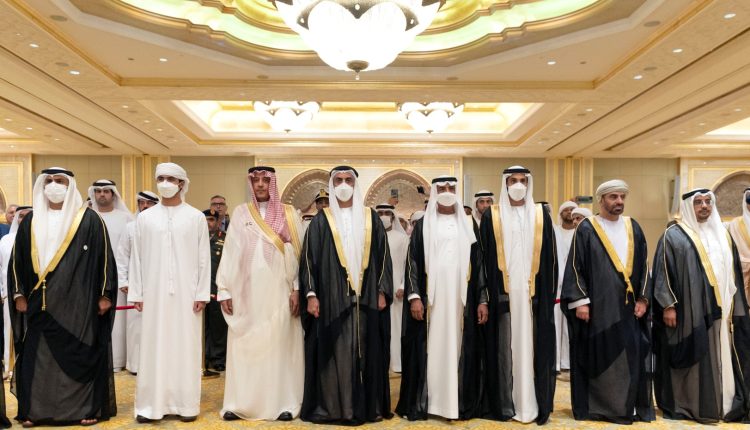 Lieutenant-General Sheikh Saif bin Zayed Al Nahyan, Deputy Prime Minister and Minister of Interior, attended this evening the reception hosted by Turki bin Abdullah Al-Dakhil, the Ambassador of the Kingdom of Saudi Arabia to the country, on the occasion of the Kingdom’s 92nd National Day..

Turki Al-Dakhil praised the rise of Saudi Arabia in alliance with the charitable men to enhance stability and security in the region, praising what the Kingdom has achieved under the leadership of the Custodian of the Two Holy Mosques King Salman bin Abdulaziz Al Saud..

He said, “Our country today is among the top ten fastest developing countries in achieving a quality standard of living, not to mention humanitarian aid and international responsibility in preserving the climate and vital initiatives and the pursuit of peace and settling conflicts around the world.”

He added: “The Kingdom embraces the Two Holy Mosques and leads, with its sister, the UAE and the countries of stability, the largest reform project in modern history with vigor and power, and the truth of those who said that the Saudi is an Emirati and the Emirati is a Saudi, whoever looks with the eyes of brotherhood and the insight of sincere love will see that in Abu Dhabi something of “thumama”, And that in Al Dhafra something from “Najd”, and in “Qasr Al-Hosn” there are smells of “Al-Masmak”, and in everything from here there is a thousand things from there, so it is not surprising that we say we are you, and you are us, we are together and forever, the sons of Zayed and the grandsons of Abdul Aziz.” He prayed to God to protect the two brotherly countries and peoples.

Listing and trading of Salik shares on the Dubai Financial Market

Decades of Kremlin prejudice in Dagestan fuels protests amid Putin’s…

Omani newspapers: Mohammed bin Zayed’s visit to the Sultanate is a major shift…