Omani newspapers: Mohammed bin Zayed’s visit to the Sultanate is a major shift in the history of the two countries’ relations 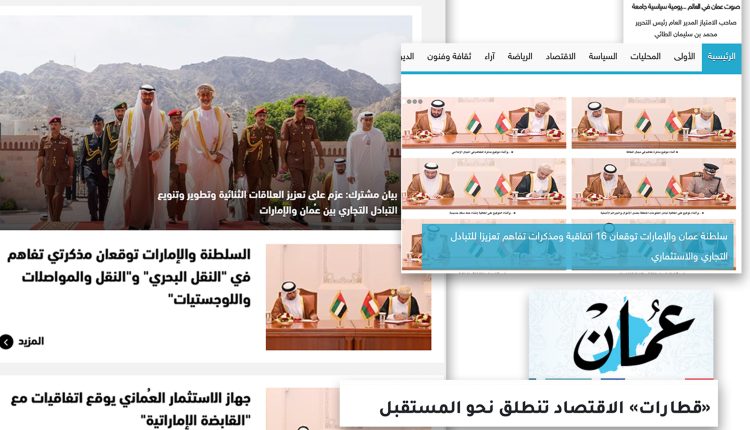 For its part, the newspaper “Oman” said in its editorial under the title “Economy trains go towards the future”… that the well-established and historical Omani-Emirati relations entered a new turning point after the visit of His Highness Sheikh Mohamed bin Zayed Al Nahyan, President of the State, “may God protect him” to the Sultanate of Oman In addition to what everyone knows about the historical, cultural and social relations that make the relations between the two countries exceptional and unique, the visit strengthened an important aspect of that relationship, which is the economic and investment aspect that had a great place between the two countries.

The article pointed out that the signing of 16 agreements and memoranda of understanding, made the future of economic relations more extraordinary than it was before.

Oman newspaper said in its article: “We can imagine this exceptional when we know that the volume of agreements signed between the Omani Investment Authority and the UAE Holding Company exceeds 5 billion Omani riyals.”

The article pointed out that “His Majesty Sultan Haitham bin Tariq and his brother, His Highness Sheikh Mohamed bin Zayed, may God protect and preserve them, affirm their determination to stimulate the government and private sectors to work to intensify joint efforts to develop and diversify trade and investment exchange, and to establish partnerships in various sectors and between business owners.” in order to achieve integration between the two brotherly countries.

The article emphasized that among the most prominent agreements signed between the two countries were those signed by Oman Railways with Etihad Rail, with the aim of designing, developing and operating a railway network linking Sohar Port to the UAE railway network, stressing that this project will serve as an important economic lung and will link The capital of the United Arab Emirates, Abu Dhabi, in the port of Sohar, which is located on the open sea of ​​Oman without barriers on the Indian Ocean and from it to all the seas of the world.

As for the Omani newspaper Al-Watan, it said in its editorial: “The visit of His Highness Sheikh Mohammed bin Zayed Al Nahyan, President of the State, “may God protect him”, to the Sultanate of Oman is a major shift in the history of the extended Omani-Emirati relations, as it reflected the visit and the discussions it included that brought together His Majesty. Sultan Haitham bin Tariq with his brother, His Highness Sheikh Mohammed bin Zayed Al Nahyan, the depth of brotherly relations that extended throughout history, as well as the desire to develop these relations at all levels, and evidence of the high official presence accompanying the two leaders during official talks and fraternal meetings that represented an opportunity to review brotherly relations The well-established historical relations between the two brotherly countries and ways to enhance and develop them in all fields to serve the interests of the two peoples and achieve their common aspirations, in addition to exchanging views on the latest developments in the region, regional and international developments and matters of mutual interest.

The article added: “Certainly, the closed session held by His Majesty Sultan Haitham bin Tariq and his brother, His Highness Sheikh Mohammed bin Zayed Al Nahyan – may God preserve and protect them – yesterday, which was limited to them, as well as the fraternal meeting yesterday, for example, was an opportunity to discuss and give the existing relations their momentum, including It enables the two brotherly countries to successfully launch and achieve common goals and interests, through their plans and programs that seek to build a single future for their brotherly Omani and Emirati peoples, which will have a positive impact on the course of relations, and is consistent with the vision of the leaderships of the two countries.

He explained, “The honorable visit confirmed the efforts of the two wise leaders to develop relations in various political, economic, cultural and social fields, benefiting from the close fraternal relations that unite them, the like of which we rarely find between two countries, especially at the economic level, which expresses mutual trust between them, and this is thanks to the awareness of my leadership. The two countries are due to the specificity and uniqueness of the relations between the Sultanate of Oman and its sister state, the United Arab Emirates, and to achieve what the Omani and Emirati peoples aspire to achieve through the visit.

The article pointed out that the importance of the outcomes of His Highness Sheikh Mohammed bin Zayed Al Nahyan’s visit to the Sultanate was demonstrated through His Highness’ statements during which he stressed that Oman enjoys a special place in the hearts of the Emirati leadership and people, expressing his pride in the close fraternal relations that bring him together with His Majesty Sultan Haitham bin Tariq. His Highness praised the approach of authentic fraternal communication that the leadership of the Sultanate of Oman and the UAE is keen on, stressing that well-established historical relations have their own character, as they extend into a single social and cultural fabric, and are based on deep bonds of brotherhood, good neighborliness and family and family interaction, along with a large and diverse base rich in common interests. His Highness expressed his aspiration to work with His Majesty the Sultan to strengthen relations between the two brotherly countries in various fields, and to build solid foundations for the common future of the two countries for the good and development of their peoples and achieve their aspirations for prosperity and prosperity.

The newspaper concluded the article by saying: “In addition to the goodness of the visit, the fraternal meetings and consultations were an opportunity to emphasize the development of the regional role and work together to strengthen the system of Gulf work and joint Arab action, and the two brotherly neighbors’ efforts to strengthen the foundations of peace, stability and prosperity in our region for the benefit of its peoples and their aspirations towards development. and relaxation.”

For its part, the Omani Vision newspaper highlighted the details of the agreements and memoranda of understanding that were signed between the UAE and the Sultanate of Oman during the visit of His Highness Sheikh Mohammed bin Zayed to the Sultanate, and said, “The Sultanate of Oman and the UAE signed 16 agreements and memoranda of understanding in the fields of energy and minerals infrastructure, transportation and logistics.

The newspaper also paid attention to the visit of His Highness Sheikh Mohamed bin Zayed, the President of the State, may God protect him, to the Omani National Museum, noting that His Highness listened to a full explanation of the museum and its important aspects of Oman’s history and civilization.