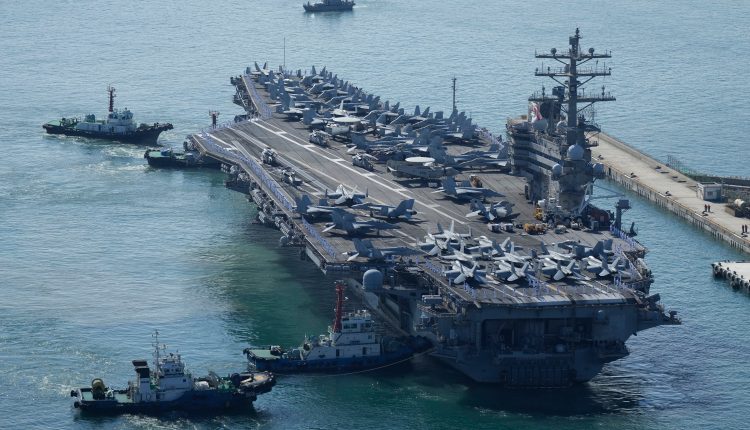 A nuclear-powered aircraft carrier launched a new round of naval drills with South Korea Friday, one day after North Korea escalated tensions in the region by firing off more ballistic missile and flying warplanes.

The USS Ronald Reagan hit the waters off the Korean Peninsula earlier this week after Pyongyang’s decided to fire an unannounced ballistic missile test over Japan.

The missile – the longest test fired by North Korea with a range of more than 2,800 miles – was immediately condemned by the White House, which accused Pyongyang of blatantly violating UN mandated international safety norms.

NORTH KOREA SIDES WITH RUSSIA IN ANNEXATION OF UKRAINE

Pyongyang has claimed it launched the missile test in response to joint trainings by the U.S. and South Korea, which it believes are practice exercises for the eventual invasion of North Korea.

South Korea’s Joint Chiefs of Staff said in a statement that the drills, which involve destroyers and other maritime vessels, are aimed at bolstering the allies’ defense capabilities.

The Reagan was also intended to be escorted during the trainings to South Korea’s southern island of Jeju.

“We will continue to strengthen our firm operational capabilities and readiness to respond to any provocations by North Korea,” the statement said.

North Korea’s Foreign Ministry on Thursday said the carrier’s redeployment poses “a serious threat to the stability of the situation on the Korean Peninsula and in its vicinity.”

The U.S., Japan and South Korea also held trilateral talks Friday over how to better bolster defenses to block North Korea’s reliance on cryptocurrency theft and other means to finance its nuclear and missile programs.

North Korea’s ballistic missile launches Thursday were the sixth round of weapons tests launched in less than two weeks.

The increase is missile tests are believed to be intended to help bolster Pyongyang arsenal and showcase its strike capabilities in an attempt to gain leverage when negotiating with the U.S.

The missile tested Tuesday is believed to have been a Hwasong-12 missile which is capable of hitting U.S. territory in the South Pacific.