What can a bee feel? 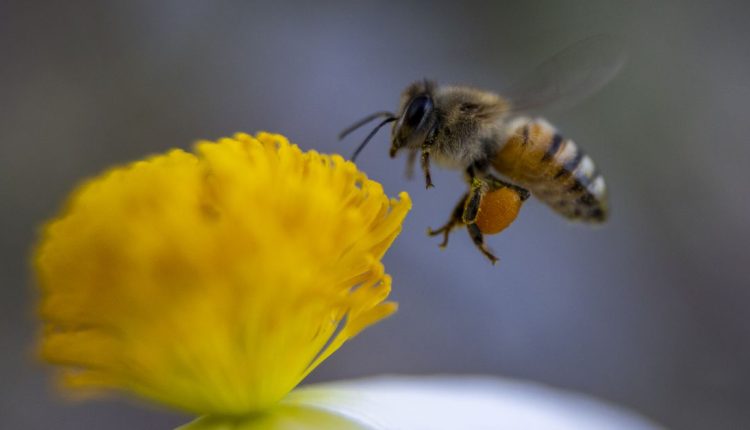 It turns out that bees may not just be able to dish out pain — they may also be able to take it.

In a study published last week in the journal PNAS, researchers in the United Kingdom found that bees trade off exposure to heat in order to access better food. The finding suggests bees aren’t just mindless automata responding to stimuli but rather conscious, feeling creatures that can experience pain and engage in complex decision-making.

In other words, bees might be sentient, which would mean they have the capacity to feel and have subjective experiences.

For the experiment, behavioral neuroscience PhD candidate Matilda Gibbons of Queen Mary University of London, along with four other colleagues, first offered bees the choice to drink from two “high quality” feeders labeled yellow with a 40 percent sucrose (sugar) solution, outfitted with an inactive heating pad. (Bees, not unlike us, love sugar.) Different groups of bees were also offered two alternative pink-labeled feeders with either a 10, 20, 30, or 40 percent sucrose solution, each paired with a heating pad that was also inactive.

The bees, of course, preferred the sweetest 40 percent sucrose solution. But researchers then repeated the experiment with a twist: The yellow high-sugar feeders were turned up to 131 F — enough to cause discomfort to the bees, but not injury. The pink feeders, which ranged from 10 to 40 percent sucrose, remained unheated.

“Instead of being sort of a robotic reflexive response, which would be them always avoiding the heat in any situation, they’re able to weigh up the different options and then suppress this response,” Gibbons said.

“Work like this recent paper that shows motivational trade-offs [and] very strongly suggests pain experience is, in some sense, quite revolutionary,” says Heather Browning, a philosopher and scientist in the Foundations of Animal Sentience project at the London School of Economics, who was not involved in the study.

One of the reasons it’s revolutionary, according to Browning, is because the ability to make motivational trade-offs is an important marker in determining sentience. It’s also been observed in hermit crabs.

“At least one of the likely roles of sentience for an organism, one of the reasons that [sentience] evolved, is to help an animal make trade-offs like this,” says Browning. “It’s to help them have flexible decision-making when they have these competing motivations.”

However, it’s not formal proof that bees are sentient or that they feel pain, the researchers cautioned, given the inherently subjective nature of pain and consciousness. Even understanding consciousness in humans is still a mystery, something known in philosophy as “the hard problem.”

But the researchers do say the possibility that bees have a capacity for pain and suffering should be taken seriously, and the findings could apply to some other insects as well.

“Can we really say that just because bees are doing this, does that tell us much about other insects? It probably does about the closer related ones, so bees and wasps and ants and maybe flies, but as you get sort of further and further away, probably less,” says Andrew Crump, a postdoctoral biologist at the London School of Economics and a co-author on the study.

As revolutionary as the new study may be, it won’t usher in a revolution of insect rights — just look at how we treat many birds and mammals despite general consensus on their sentience.

Researchers are at the beginning of what will likely be a long slog to better understand if, and how, insects are sentient. But the findings do serve as one more proof point that the number of species we include as sentient may be undercounted — and grossly so, given that there are an estimated 10 quintillion insects alive at any moment (1 quintillion is a million trillion).

The debate over who gets to be in the sentience club

Despite insects’ extraordinary evolutionary success, animal science researchers have only begun to investigate whether they possess consciousness in the last few years.

Up until the late 1970s, researchers in the field focused on animal behavior and didn’t try to determine if their behavior conferred sentience. The animal mind — if such a thing existed — was considered a black box better left unopened.

That changed in large part due to the work of Donald Griffin, a Harvard-trained zoologist who began to argue in the late 1970s that animals, not just chimpanzees and mammals, are conscious and their minds should be further studied. His students began conducting animal studies and the field, which he named “cognitive ethology,” grew from there.

The idea was controversial at the time, but today there is consensus among those who study consciousness that birds and mammals can possess sentience. Though there are some outlier skeptics, there’s also consensus that fish feel pain, which could be enough to indicate sentience. The jury is still out on insects, and probably will be for some time, but our understanding of them is changing.

“Social insects are traditionally thought to be wholly governed by instinct: They can build complex nests and efficiently divide up their labor through innate behaviors, but are considered stupid as individuals, with complexity emerging only at the group level,” wrote Lars Chittka, a co-author on the study and author of The Mind of a Bee, in the Washington Post. “But there is significant evidence that bees have an inner world of thought — that they are not responding to stimuli only with hard-wired responses.”

Much of the debate around sentience has centered around the neocortex, the part of the mammalian brain that processes language, cognition, and more, and that most neuroscientists believe gives rise to consciousness. Crump says birds don’t have a neocortex, but a structure in their brain, the dorsal pallium, is similar and is where scientists believe birds’ consciousness would lie.

Fish don’t have that brain structure either, but over the last two decades, researchers have come to believe that fish likely experience pain in the telencephalon region of the brain, which receives activity from their nociceptors — sensory receptors that identify and react to harmful stimuli. We may come to better understand the lives of insects through similar discoveries, but making the determination as to whether or not particular insect species are sentient, let alone all insects, will be tricky.

Much of insect researchers’ current focus is just figuring out what biological markers of sentience are, though the demonstrated ability to make motivational trade-offs, like Gibbons’s bees did, is one of them.

The study builds upon our understanding of insects’ capacity for pain, but it doesn’t provide definitive proof that bees or other insect species are sentient. However, using the precautionary principle — the idea that we should err on the side of minimizing harm in the face of limited information and uncertainty — let’s suppose that they are. Should that change how we treat them?

Bees and other insects might feel pain. Now what?

The debate over whether insects are sentient may seem frivolous, given how distant they feel from mammals, let alone human beings. But every past debate over who deserves moral attention and just how wide our circle of concern should be has seemed frivolous to some. If just a small fraction of the 10 quintillion insects alive right now can feel pain, some changes may need to be in order.

In light of this study, the most sensible place to start is with beekeeping. According to Jason Schukraft, formerly at the research group Rethink Priorities (he’s now at the grant-making foundation Open Philanthropy), the trillion or so bees managed globally for their honey can suffer from a variety of threats: pesticide exposure, poor nutrition, disease, long-distance transport, invasive hive inspections, and honey harvest. Those factors have been linked to colony collapse disorder, but they can be ameliorated by better management.

Many cultures around the world have long eaten insects, but in recent years there’s been a rise in insect factory farming — primarily to supply feed for factory-farmed chicken and fish, rather than for direct human consumption. It’s an emerging trend we might want to think twice about.

If we sourced more protein from insect farms instead of cattle, pig, and chicken farms, it might be a win for human health. But if commonly farmed insects, like crickets and mealworms, can feel pain, it could be a moral catastrophe orders of magnitude worse than livestock farming, given the astronomical numbers of insects that would need to be raised to replace the 70 billion-plus land animals farmed globally each year.

We can find ways to more humanely coexist with insects, such as reducing insecticide use at home and on farms. Policymakers might one day consider protecting insects under the law too. Earlier this year, the UK parliament passed the Animal Welfare (Sentience) Bill, which encompasses all vertebrates; cephalopods, like octopus and squid; and decapods, like lobsters, shrimp, and crawdads. The law isn’t going to, say, outlaw shrimp farming, but it’s a sign that those highest in government are giving the question of animal sentience real consideration.

Crump says their recent study, and future studies, could — when combined — build a clearer picture as to whether bees and other insects are sentient or not.

“It won’t be any one study [that determines insect sentience], and it won’t be any one kind of indicator,” Crump said. Each development may only provide weak evidence for sentience, but if there are enough pieces all pointing to the same conclusion, Crump says, “That’s when we start to get quite a strong case.”

Search for missing Kiely Rodni ramping up over the weekend: Officials