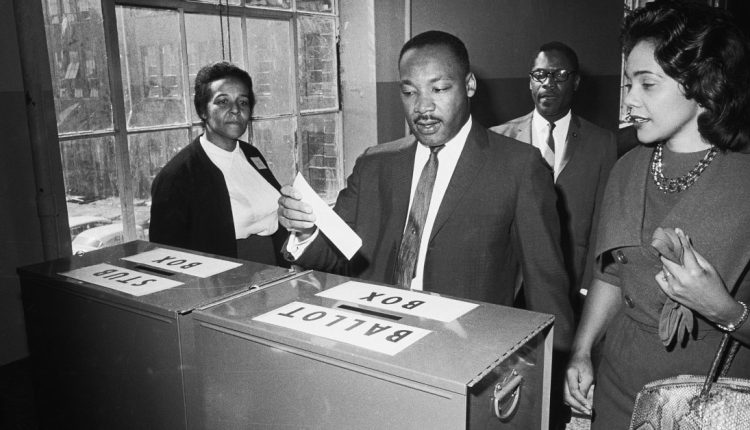 Ahead of the Martin Luther King Jr. holiday, President Biden visited the grave of Dr. King in Atlanta and gave the angriest speech of his presidency, insisting that the Senate has a moral obligation to protect voting rights. After months of delay, Senate Leader Chuck Schumer finally moved to at least force open debate on federal voting rights legislation this week. As the nation honors Dr. King and the civil rights movement’s legacy, Democrats are hoping against the longest odds that they can unite to push back against an assault on democracy that the President calls “Jim Crow 2.0.”
[time-brightcove not-tgx=”true”]

But America’s memory of Jim Crow has been distorted by a political culture that pays lip service to Dr. King while forgetting his vision of a democracy that works for all Americans. From the Montgomery bus boycott to the passage of the Voting Rights Act, Dr. King was a spokesperson for the Black-led freedom movement that was determined to end Jim Crow segregation in America. But Dr. King was also clear that Black Americans did not simply want to be integrated into a burning house. They organized with a broad and diverse coalition of Americans to challenge the basic contradictions that threatened the promise of democracy for all people. The Beloved Community that Dr. King preached and organized toward wasn’t just an America where Black, white and brown could sit down in a restaurant together. It was the hope of a political system where the Black, white and brown masses could vote together for leaders who serve the common good.

Read More: President Biden’s Speech in Atlanta Was Designed to Appeal to Black Voters—But Not Everything About It Succeeded

Today, the U.S. Chamber of Commerce opposes both voting rights laws and living wages. They back Senators Kyrsten Sinema, Joe Manchin and their Republican colleagues in an effort to normalize the subversion of democracy and make voting rights the special interest of minority groups. But they don’t separate their money, so we surely shouldn’t separate and bifurcate our movement demands for a democracy that works for everyday people. Voting rights are about power to write policy that impacts our daily lives and power to control the purse strings of the U.S. budget and over $21 trillion in gross domestic product.

Since the Supreme Court’s 2013 decision in Shelby County vs. Holder, the 1965 Voting Rights Act has been stripped of its power to check state legislatures where a majority wants to pass election law changes that make it more difficult for people to vote. So-called “election integrity” measures have been proposed in states with long histories of voter suppression, using the contemporary tools of voter-roll purges or voter ID requirements to reduce the potential power of a multiethnic voting coalition. Since 2013, when I led the NC NAACP in challenging the first voter-suppression bill passed by a state after the Shelby decision, I’ve called this reality James Crow, Esquire. The data analysis and legal maneuvers are more sophisticated than Jim Crow, but the goal is the same: minority rule to preserve an unequal society while giving lip service to democracy.

The voter-suppression measures that became law in 19 states last year were justified by Trump’s Big Lie about the 2020 election, but the “election integrity” measures they make law are not new. Rolling back voter access, purging voting rolls, requiring strict forms of voter ID and gerrymandering districts so that Republicans can win a majority without getting a majority of the votes are all tools in the James Crow, Esquire toolbox. Yes, they disproportionately harm Black voters and voters of color. But their impact hurts most of us.

When Dr. King spoke at the end of the Selma to Montgomery March in 1965, he noted that as long as the Southern aristocracy could pit poor white people against poor Black people with the idea of race, they could prevent people from joining together in a democratic society to reconstruct an economy that works for everyone. “Thus,” Dr. King concluded, “the threat of the free exercise of the ballot by the Negro and the white masses alike resulted in the establishment of a segregated society… That’s what happened when the Negro and white masses of the South threatened to unite and build a great society.” Jim Crow always had a purpose: preventing the multiethnic voting coalition that could create a more equal society.

The assault on voting rights that we have witnessed over the past decade is about more than suppressing Black votes. James Crow, Esquire employs an array of tactics to prevent everyday people from having the power to elect leaders who would enact policies the vast majority of Americans support, like living wages, universal access to health care, paid family leave, immigration reform and meaningful action to address the climate crisis.

Read More: ‘There Is Not Some Separation Between Jesus and Justice.’ How Rev. William J. Barber II Uses His Faith to Fight for the Poor

Whatever the fate of the current legislation in the Senate, we must build a broad, multiethnic coalition to fight together for democracy in America. This is why the Poor People’s Campaign has announced plans for a Mass Poor People’s and Low Wage Workers Assembly and Moral March on Washington on June 18. However much we are able to push back against the present assault on voting rights, we need people from every race, creed and culture to unite in support of the common good and mount an historic get-out-the-vote effort this fall. No one would put this much energy into suppressing our votes if a multiethnic coalition did not have the potential to change this nation. This MLK weekend, we must resolve to do what Dr. King noted our foreparents did during Reconstruction: unite and build a great society.

Texas suspect in corporal’s death on the run since 1996, wanted for murder in…

California trans child molester, 26, gets 2 years in juvenile facility thanks to…