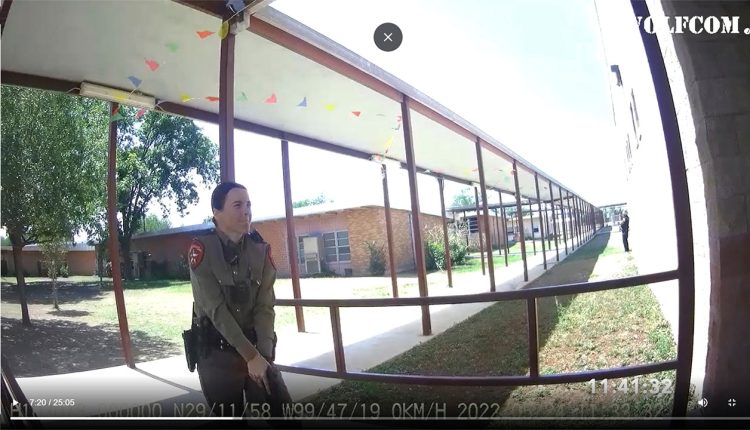 The Uvalde district this week fired a newly hired former Texas state trooper who was on scene of the Robb Elementary School massacre in May.

Officer Crimson Elizondo was hired despite being part of the law enforcement response that waited more than an hour to confront the gunman at the Uvalde school. Elizondo is one of those under internal investigation, according to Texas Department of Public Safety records.

This image from video released by the City of Uvalde, Texas, shows Texas Department of Public Safety trooper Crimson Elizondo responding to a shooting at Robb Elementary School on May 24, 2022.
(City of Uvalde via AP)

But her firing didn’t go far enough, according to the district.

“Recent developments have uncovered additional concerns with department operations,” the district said in a statement.

Officers Lt. Miguel Hernandez and Ken Mueller were placed on administrative leave, and Mueller has chosen to retire. “Officers currently employed will fill other roles in the district,” the statement read.

Uvalde police officers and other law enforcement officers are seen responding to a mass shooting at Robb Elementary School in Uvalde, Texas, in a bodycam video recorded on May 24, 2022.
(Uvalde Police Department)

“We are confident that staff and student safety will not be compromised during this transition,” the district said.

Elizondo was reportedly heard on bodycam video saying, “If my son had been in there, I would not have been outside. I promise you that.”