Ukrainian refugees struggle to find work in US, some agencies want government to extend stay 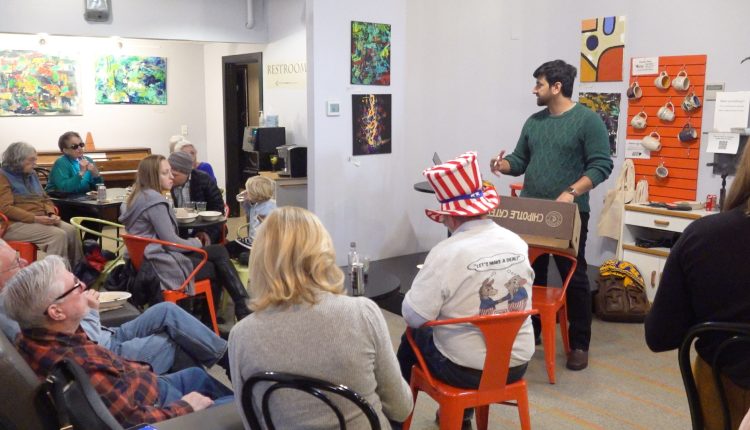 MINNEAPOLIS, M.N. – Over 215,000 Ukrainian refugees have fled to the U.S. after escaping the Russian war on Ukraine, according to the United Citizenship and Immigration Services. Many are leaving behind friends and family, not knowing if they’ll ever see them again.

Snow covers demolished buildings in Kyiv, Ukraine, 9 months after the Russian invasion. For mother and daughter Elizabeth Surzhko and Viktoria Bolotina, snow may be the only thing that’s similar in their new home in Minneapolis, Minnesota.

“It’s been very hard in Ukraine in the last month because there is no electricity,” 21-year-old Bolotina said.

The Kyiv natives came to America less than a month ago, leaving behind their father and husband.

RUSSIA’S PUTIN SAYS UKRAINE WAR COULD BE ‘LONG PROCESS,’ INSISTS HE HAS NOT ‘GONE MAD’ ON NUCLEAR WEAPONS

Mother and daughter Elizabeth Surzhko and Viktoria Bolotina, came to Minneapolis with their younger sister and daughter Polina. The older daughter and mom are looking for work, while Polina attends kindergarten.
(Fox News/Mills Hayes)

“I don’t know if I see him ever again. I love him very much,” Bolotina said, fighting back tears.

They’re among millions of Ukrainians who fled after Russia invaded last February.

“Number one priority for us is to go to work and get a job,” Bolotina said. “Also, I would love to go to college and work and study at the same time.”

Bolotina currently takes online night classes at a Ukranian university due to the time difference in Minnesota. Her sister, Polina, is in kindergarten. For now, she helps her mother translate and navigate life in the U.S.

New York City, Chicago and Seattle have welcomed the most Ukrainian families through I-134 supporters, according to the United Citizenship and Immigration Services.

They’re both looking for work like their housemate, Alexandra Chirkova, who owned a beauty salon in Berdyansk and has over 10 years of experience in cosmetology. In Ukraine, cosmetology is more similar to the American version of an esthetician. Chirkova frequently worked with her clients on permanent makeup, lip fillers and other skincare treatments.

“I am looking for such work here, but I know it’s very difficult to get license here, I don’t know how to get it,” Chirkova said.

The Lutheran Immigration and Refugee service says a majority of Ukrainian refugees are women and children which means they face childcare issues too.

“There are often language barriers that prevent Ukrainians from working in their chosen field,” President and CEO Krish O’mara Vignarajah said. “Transportation is a major obstacle. They don’t have access to cars.”

TIME NAMES UKRAINIAN PRESIDENT ZELENSKY ITS 2022 ‘PERSON OF THE YEAR’

Vignarajah says she hopes the administration will understand, “these refugees do need, not just short term protection, but long term support and a permanent pathway to you know, a long term status.”

The American Service in Ukraine director Aswar Rahman helps Ukrainian families come to the United States. He saw the suffering of the Ukranian people on the news and hopped on a flight in March of last year to help. Rahman said their first family arrived at the end of Summer, and now they have welcomed 12 families in total since then.

On April 21, 2022, the U.S. announced a key step toward fulfilling President Biden’s commitment to welcome Ukrainians fleeing Russia’s invasion. It provides a pathway for Ukrainian citizens and their immediate family members who are outside of the U.S. to come to the country and stay temporarily in a 2-year period of parole.

For refugees looking to go to college or get professional certifications they need to pursue their previous careers, Rahman isn’t sure if they should be investing their time in that or working to make money, since their stay for now is limited.

“One thing I wish the government did to allow people to plan out long term, is to make it clear that we don’t intend to send anybody back, any of our friends back to places that aren’t at the moment even habitable,” Rahman said. “I hope the government will extend eventually.”

Rahman is in Poland now, due to dangerous fighting in Ukraine, to recruit more families. He says the opportunity to meet the U.S. workforce shortage is astonishing.

“Minnesota right now has at least 100,000 open positions and we’re a state of 5 million people,” Rahman said. “We have such a need for people to come [to] our public schools, and I’m sure our private schools too. We all need students. We’re all suffering. We all need new community members.”

The group American Service in Ukraine says they are looking for volunteers in the Minneapolis area to pick up refugees from the airport, help find housing and assist them with getting jobs.
(Fox News/Mills Hayes)

UKRAINE’S STRATEGY TO COMBAT PUTIN’S WINTER OFFENSIVE: ‘WE NEED TO WIN THIS WAR AS SOON AS POSSIBLE’

The Tent Partnership for Refugees works with the business community to put refugees to work. In September, they hosted a U.S. business summit where 45 of America’s leading brands, including Amazon, Hilton, Pfizer and PepsiCo pledged to collectively hire over 22,000 refugees in the U.S. over the next three years.

Yaron Schwartz is the associate director for Global Partnerships and lead for U.S. at Tent. He says there are business benefits to hiring refugees according to a Fiscal Policy Institute study.

“The majority of employers reported that refugees have lower turnover rates in the average employee,” Schwartz said. “American consumers were actually more likely to buy a product from a company that had agreed to hire refugees.”

Fox reached out to Minnesota U.S. Representative Ilhan Omar and Senator Amy Klobuchar Monday about the government extending how long Ukrainians are allowed to stay in the U.S. and have not heard back.

Mills Hayes joined Fox News in 2022 as a multimedia reporter in Minneapolis.

US Considers Shooting Down Chinese Spy Balloon Over Atlantic