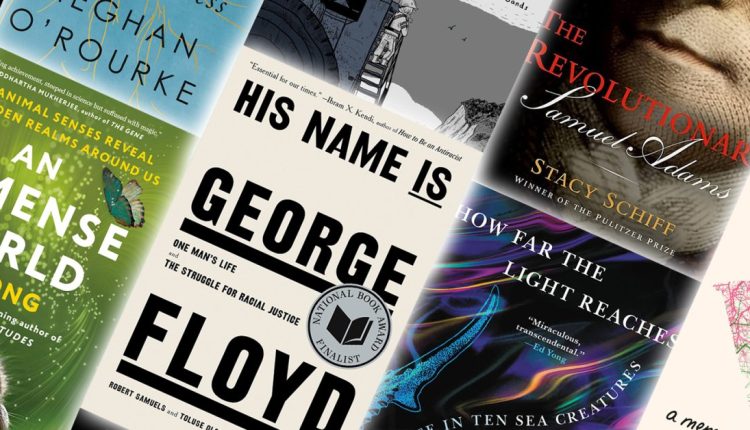 A good nonfiction book doesn’t just tell you something new about the world, it pulls you out of your place in it and dares you to reconsider what you thought you knew, maybe even who you are. The best nonfiction books that arrived this year vary in scope—some are highly specific, some broad and searching—but they all ask giant questions about loss, strength, and survival. In The Escape Artist, Jonathan Freedland underlines the power of the truth through the journey of one of the first Jews to escape Auschwitz. In How Far the Light Reaches, Sabrina Imbler reveals the ways marine biology can teach us about the deepest, most human parts of ourselves. From Stacy Schiff’s brilliant chronicle of Samuel Adams’ role in the American Revolution to Imani Perry’s illuminating tour of the American South, here are the 10 best nonfiction books of 2022.

Pulitzer Prize winner Stacy Schiff revisits the American Revolution in her engrossing biography of founding father Samuel Adams. The Revolutionary: Samuel Adams centers on the years leading up to 1776 when Adams helped fan the earliest flames of the independence movement. Though he drove the anti-British rebellion in Massachusetts and had an outsized role in the Revolution, Adams’ story has been told far less than those of other founders like George Washington and Alexander Hamilton. Schiff details his clandestine work and his growing radicalization to show how vital he was to American independence, crafting an intricate portrait of a man long overshadowed by his contemporaries.

Beginning in the late 1990s, Meghan O’Rourke was tormented by mysterious symptoms that would consume her life for years to follow. She describes her wrenching experience searching for a diagnosis in The Invisible Kingdom: Reimagining Chronic Illness, a 2022 National Book Award finalist. O’Rourke’s reported memoir is an indictment of the U.S. health care system and its approach—or lack thereof—to identifying and treating chronic illnesses, which take a grave toll on millions of Americans. Moving between her own medical journey, the history of illness in the U.S., and the crisis faced by millions currently suffering from long COVID, O’Rourke writes with an empathetic hand to argue why and how we need to change our systems to better support patients. The book is a bold and brave exploration into a much-overlooked topic, one that she punctuates with candor and urgency.

Sabrina Imbler thoughtfully examines connections between science and humanity, tying together what should be very loose threads in 10 dazzling essays, each a study of a different sea creature. In one piece from their debut collection, Imbler explores their mother’s tumultuous relationship with eating while simultaneously looking at how female octopi starve themselves to death to protect their young. In another, they relate the morphing nature of cuttlefish with their own experiences navigating their gender identity. Throughout, Imbler reveals the surprising ways that sea creatures can teach us about family, sexuality, and survival.

Buy Now: How Far the Light Reaches on Bookshop | Amazon

7. His Name Is George Floyd, Robert Samuels and Toluse Olorunnipa

In their engaging book, Washington Post journalists Robert Samuels and Toluse Olorunnpia expand on their reporting of the 2020 murder of George Floyd by police officer Derek Chauvin. His Name Is George Floyd: One Man’s Life and the Struggle for Racial Justice centers on the life Floyd led before he was killed, captured through hundreds of interviews and richly textured research. The biography explores how Floyd’s experiences were shaped by systemic racism, from the over-policed communities where he was raised to the segregated schools he attended. Samuels and Olorunnipa illustrate, in compassionate terms, the father and friend who wanted more for his life, and how his death became a global symbol for change.

Buy Now: His Name Is George Floyd on Bookshop | Amazon

In her second memoir, Pulitzer Prize winner Margo Jefferson brilliantly interrogates and expands the form. Constructing a Nervous System finds the author reflecting on her life, the lives of her family, and those of her literary and artistic heroes. Jefferson oscillates between criticism and personal narrative, engaging with ideas about performance, artistry, and the act of writing through a plethora of lively threads. She considers everything: her parents, Bing Crosby and Ike Turner, the way a ballerina moves on stage. What emerges is a carefully woven tapestry of American life, brought together by Jefferson’s lyrical and electric prose.

Journalist Ed Yong reminds readers that the world is very large and full of incredible things. An Immense World: How Animal Senses Reveal the Hidden Realms Around Us is a celebration of sights and sounds, smells and tastes, and the unique ways different animals exist on the planet we all share. Yong’s absorbing book is a joyful blend of scientific study and elegant prose that transforms textbook fodder into something much more exciting and accessible. From dissecting why dogs love to sniff around so much to detailing how fish move in rivers, Yong underlines why it’s so important to take the time to stop and appreciate the perspectives of all the living things that surround us.

When he was just 19 years old, Rudolf Vrba became one of the first Jews to break out of Auschwitz. It was April 1944, and Vrba had spent the last two years enduring horror after horror at the concentration camp, determined to make it out alive. As Jonathan Freedland captures in his harrowing biography, Vrba was fixated on remembering every atrocity because he knew that one day his story could save lives. The Escape Artist: The Man Who Broke Out of Auschwitz to Warn the World is heavy reading that spares no detail of the brutalities perpetrated by the Nazis during the Holocaust. It’s also a crucial, skillfully rendered look inside the journey of a teenager who risked his life to warn Jews, and the rest of the world, about what was happening in Auschwitz.

In 2005, Kate Beaton had just graduated from college and was yearning to start her career as an artist. But she had student loans to pay off and the oil boom meant that it was easy to get a job out in the sands, so she did. In her first full-length graphic memoir, Beaton reflects on her time working with a primarily male labor force in harsh conditions where trauma lingered and loneliness prevailed. Ducks: Two Years in the Oil Sands is a bruising and intimate account of survival and exploitation—of both the land and the people who worked on it—and is brought to life by Beaton’s immersive illustrations. In unveiling her plight, Beaton makes stunning observations about the intersections of class, gender, and capitalism.

For her striking work of nonfiction, Imani Perry takes a tour of the American South, visiting more than 10 states, including her native Alabama. Perry argues that the associations and assumptions made about the South—with racism at their core—are essential to understanding the United States as a whole. While there is plenty of history embedded throughout South to America: A Journey Below the Mason-Dixon to Understand the Soul of a Nation, the winner of the 2022 National Book Award for nonfiction, it is no history book. Instead, it’s an impressive mix of deftly compiled research and memoir, with Perry making poignant reflections on the lives of her own ancestors. The result is a revelatory account of the South’s ugly past—the Civil War, slavery, and Jim Crow Laws—and how that history still reverberates today.

After Amy Bloom’s husband Brian was diagnosed with Alzheimer’s disease, she supported him through the impossibly difficult decision to end his life, on his terms, with the aid of an organization based in Switzerland. Bloom’s memoir begins with their last flight together—on the way to Zurich—as she reflects on the reality that she will be flying home alone. But in these moments of despair, and the enormous grief that follows their trip, she finds tenderness and hope in remembering all that came before it. In writing about their marriage, Bloom unveils a powerful truth about the slippery nature of time. The book is a beautiful, heartfelt tribute to her husband, and a crucial reminder that what drives grief is often the most profound kind of love.