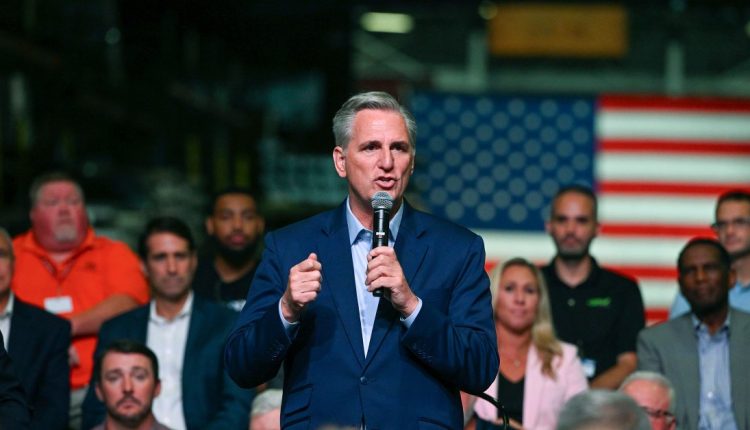 At a Friday event in Pittsburgh, House Minority Leader Kevin McCarthy unveiled a plan that lays out the Republican agenda ahead of the midterm elections and offers a view for how they would legislate should they retake control of the House. It shows Republicans continue to view tough messaging on immigration as a key strategy to unite their party and win over voters.

“We’ve watched what’s happened to our border, the millions of people who are just walking across, people on the terrorist watch list,” McCarthy said. “But now we’re watching it create every community to be a border community.”

Some of the other central tenets of McCarthy’s plan include inflation, crime, and supply chain issues, but immigration has been a leading talking point for Republicans gearing up for the midterm elections. McCarthy’s new “Commitment to America” comes as Republican Governors have been transporting migrants from Texas and Arizona to liberal cities like New York, Washington D.C., and recently Martha’s Vineyard, Mass., to protest the Biden Administration’s border policies in what the White House has called “political theater.”

Though McCarthy’s plan echoes language used by the Republican governors—calls to “secure America’s border,” for example—it offers only vague policy solutions, a move that Brendan Buck, who was an aide to former Republican House Speakers Paul Ryan and John Boehner, says is intentional. The plan is intended to unite Republicans on messaging and differentiate themselves from Democrats, but to keep the language imprecise enough that they would not be beholden to specific policy expectations if they come into power, says Buck, who helped devise similar plans in 2010 and 2016. “Immigration is probably the most explosive issue for Republicans,” he says. Buck adds that a strategy is to reach voters in swing districts by addressing more narrow issues that may appeal to them, while also maintaining an appeal to the broader Republican base. “Almost always, year after year, the top of that list is going to be immigration,” he says.

Some polls indicate that support for increased border security is on the rise in the U.S., and favorable views of immigrants may be decreasing. An NBC News poll published Sept. 18 found that only 36% of the American public approve of President Joe Biden’s handling of border security and immigration, and an August NPR-Ipsos poll found 54% of Americans believe it is somewhat true that there is an “invasion” at the southern border. These findings come after a May poll by the Associated Press-NORC Center for Public Affairs Research found that one in three adults believes in the so-called “great replacement” theory that the American electorate is being replaced by immigrants.

Congressman Don Bacon, a Republican who is up for reelection in Nebraska, tells TIME that McCarthy’s plan allows voters see that Republicans aren’t running solely anti-Biden campaigns, but are also providing a vision for what the U.S. can look like under Republican control, which includes tougher border security. “If you ask Republicans, [immigration] is the number two issue,” Bacon says, behind inflation. “People got to know what you’re for, not just what you’re against, I believe. And so I support Leader McCarthy’s plan here.”

But the plan so far mostly details what the Republicans view as shortcomings by the Biden Administration. It includes a timeline of Biden’s end to construction on President Donald Trump’s border wall, the Biden Administration’s attempt to end Title 42 expulsions (a health measure used by border officials to immediately expel people who attempt to cross the border in the name of mitigating COVID-19 spread), and the June deaths of 51 migrants who were found in the back of an overheated semi-truck in San Antonio.

Read More: Why Human Smuggling Deaths Will Continue After the San Antonio Tragedy

As far as policy solutions, the plan states that Republicans would “fully fund effective border enforcement strategies, infrastructure, and advanced technology to prevent illegal crossings and trafficking by cartels,” and “end catch-and-release loopholes, require legal status to get a job, and eliminate welfare incentives.”

The plan claims there were 3.9 million “illegal border crossings under Biden—larger than dozens of U.S. states,” a statement that doesn’t paint the complete picture at the U.S.-Mexico border because it conflates arrests at the border with successful crossings. Between Feb. 2021 and Aug. 2022, there were more than 3.5 million arrests at the U.S.-Mexico border, according to data by U.S. Customs and Border Protection (CBP), and about half of those resulted in Title 42 expulsions back to Mexico or their country of origin. The other half were permitted to cross the border, either to claim asylum or because people from some countries—Venezuela or Cuba, for example—can’t be returned to their home countries. Additionally, CBP’s data counts arrests, not individual people, and month after month, roughly 20-30% of the arrests documented by CBP were of people who have tried more than once to cross the border.

Read More: Why Judges Are Basically in Charge of U.S. Immigration Policy Now

Marielena Hincapié, executive director of the National Immigration Law Center (NILC), a national immigrant advocacy organization, says “Commitment to America” falls in line with a Republican pattern of using immigrants as “political scapegoats.” “This is their playbook,” Hincapié says. “We saw this exactly with Trump as well, where he very successfully used immigration as a wedge issue as a way to rally his base by using rhetoric that was dehumanizing against immigrants.”

As the midterms approach, Republican Governors Greg Abbott of Texas, Doug Ducey of Arizona, and Ron DeSantis of Florida, have said they will continue to send migrants to Democrat-led cities. Congressman Tony Gonzales, a Texas Republican who is up for reelection and represents the largest stretch of U.S.-Mexico border, expressed his support of McCarthy’s “Commitment to America,” and linked it to the Governors’ migrant busing schemes. “You know, I’ve never been to Martha’s Vineyard, but I have been to Del Rio, I have been to Eagle Pass, I have been to El Paso,” Gonzales told reporters on Sept. 20. “This Democrat House leadership has failed America. People are no longer safe. People in my district no longer feel safe.”