Pennsylvania man accused of plowing into crowd, murdering mother said he was tired of arguing with her: report 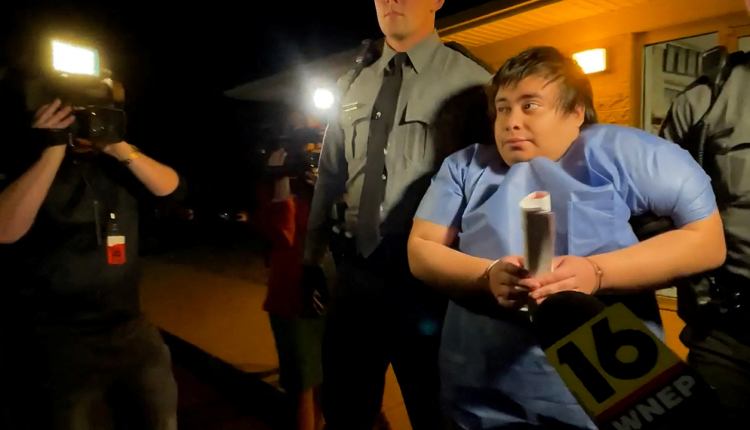 The Pennsylvania man accused of plowing through a fundraiser then bludgeoning his mother to death with a hammer reportedly told police that he was extremely frustrated and was tired of fighting with his mother about money.

Adrian Oswaldo Sura Reyes, 24, was arrested minutes after the attacks and is facing two counts of criminal homicide.

He allegedly plowed through a crowd around 6:15 p.m. outside a bar that was holding a fundraiser for victims of a house fire that killed 10 people last week.

One woman was killed and 17 others were injured in that attack.

Just minutes later, a bystander who was about a mile away from the fundraiser called 911 and said that someone was assaulting a woman with a hammer, according to charging documents obtained by Press Enterprise. When the bystander asked the suspect what he was doing, he allegedly held up the hammer and told him to “get back.”

WHO IS BRADLEY DAWSON? AMERICAN CHARGED WITH MURDER IN WIFE’S HONEYMOON BEATING DEATH IN FIJI

Sura Reyes allegedly admitted to investigators that he plowed through the crowd then killed his mother, saying that he was frustrated over fighting with mother about money, the Press Enterprise reports.

“Do you know the incident that happened in the bar in Berwick?… Yeah, that was me,” Sura Reyes told police, according to the local newspaper.

A judge denied bail for Sura Reyes ahead of a preliminary hearing scheduled for Aug. 29. He told local reporters “sorry” as he was being transported from the Shickshinny police station in the early hours of Sunday morning.

Sura Reyes was recently on probation for another attack involving his mother, according to the Press Enterprise. He allegedly hit her in the face with her own cell phone on Dec. 26, 2020, because she wouldn’t let him use the phone, the local newspaper reports.

Crews work to demolish a house that was destroyed by a fatal fire on the 700 block of 1st Street in Nescopeck, Pa., Friday, Aug. 5, 2022.
(Sean McKeag/The Citizens’ Voice via AP)

“This is a complete tragedy in a community where there’s already been tragedy,” Petroski said. “We are going to do our job to the best of our abilities to conduct a thorough investigation not only for the families but the community members. They’re already hurting.”

Here’s where the jobs are for…