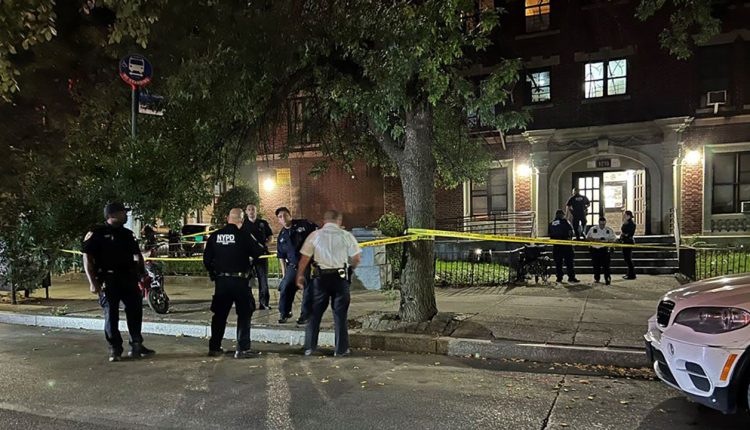 A 17-year-old girl was fatally shot in Brooklyn, New York, Wednesday evening while sitting outside of her apartment building with a group of friends.

The group was reportedly approached by two suspects on scooters who opened fire, shooting the girl in the face. She was rushed to a hospital where she was pronounced dead.

Witness Sukanya Thompson who lives down the street from the victim told reporters, “It was a gruesome scene … Her sister was holding her. It was just tragic scene. A lot of people were crying… You could really tell she had an impact on the community.”

Walter Gonzolaz, who lives on the fourth floor of the building told reporters he heard the shots and saw the girl lying on the ground. “It’s terrible, I’ve got kids too,” he said.

NYPD investigates after a girl, 17, was fatally shot outside of her apartment in Brooklyn on Wednesday.
(Peter Gerber)

The suspects fled the scene northbound from the 1200 block of Eastern Parkway in Crown Heights.

No arrests have been made and no suspect description has been given others than they were men wearing dark clothing.

Thompson told freelance reporter Peter Gerber that shootings happen regularly in that neighborhood. She called the situation “heartbreaking but it’s also normal cause I’ve been living in the hood my whole life so it’s really nothing that’s new to me. People die every day at this point. You just get used to it, but rest in peace to her. I do feel bad for what happened cause I don’t think she was supposed to get shot.”

She was the latest victim of shootings across the city. In the last day, 16 people have been shot in nine shootings, the New York Post reported.

“She was a good kid, not involved in anything,” the girl’s friend told the New York Daily News.

It’s unclear why the suspects targeted the group.

No one else was hurt in the shooting.