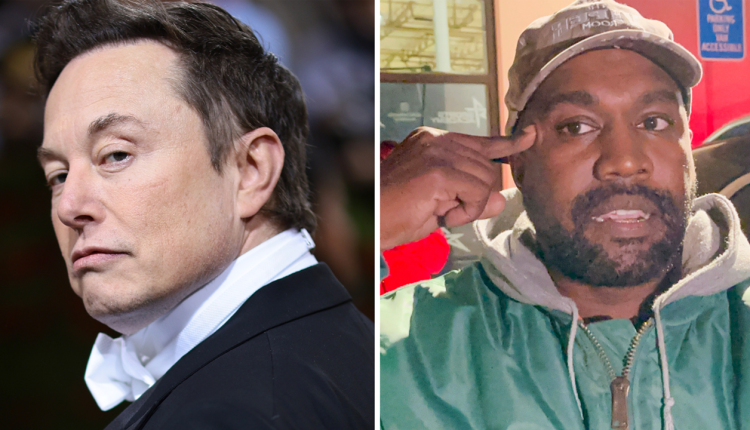 Elon Musk revealed he “personally wanted to punch” Kanye West after the rapper posted a photo of a swastika to Twitter.

“How are you going to balance the level to which we speak about the freedom of expression on Twitter?” Musk was asked during a Live Q&A regarding “Twitter files,” which revealed how the tech giant censored the Hunter Biden laptop story ahead of the 2020 election.

“I personally wanted to punch Kanye, so that was definitely inciting me to violence. That’s not cool,” Musk responded.

West, who now goes by the name Ye, was suspended from his Twitter account on Friday after posting a photo of a swastika inside the Star of David.

ELON MUSK GIVES KANYE WEST THE BOOT FROM TWITTER OVER OFFENSIVE POSTS: ‘I TRIED MY BEST’

NEW YORK, NEW YORK – MAY 02: Elon Musk attends The 2022 Met Gala Celebrating “In America: An Anthology of Fashion” at The Metropolitan Museum of Art on May 02, 2022 in New York City. (Photo by Dimitrios Kambouris/Getty Images for The Met Museum/Vogue) LOS ANGELES, CA – OCTOBER 28: Kanye West aka Ye is seen on October 28, 2022 in Los Angeles, California (Photo by MEGA/GC Images)
(Getty Images)

“I tried my best. Despite that, he again violated our rule against incitement to violence. Account will be suspended,” Musk posted on Twitter on Friday of West’s account.

Musk later explained West was suspended “because at some point you have to say what is incitement to violence because it is against the law in the U.S.”

File – In this Nov. 6, 2019, file photo, Kanye West attends the WSJ. Magazine 2019 Innovator Awards at the Museum of Modern Art in New York. Officials in Wyoming have received a building permit application from Kanye West for a proposed amphitheater on property owned by the rapper. West recently announced that he plans to move the headquarters of his shoe and clothing company, Adidas Yeezy, to Cody. He also wants to build a 70,000-square-foot amphitheater on his 4,000-acre ranch. The Cody Enterprise reports the Park County Planning and Zoning Commission plans to discuss the proposal. (Photo by Evan Agostini/Invision/AP, File)
(Evan Agostini/Invision/AP, File)

“Posting swastikas in what obviously is not a good way is an incitement to violence.

“West’s account was previously temporarily suspended in October after he said he would go “death con 3 On JEWISH PEOPLE.”

Hunter Biden’s laptop was at the center of a Big Tech censorship campaign in 2020.
(Kevin Lamarque/Reuters)

“Some of the first tools for controlling speech were designed to combat the likes of spam and financial fraudsters. Slowly, over time, Twitter staff and executives began to find more and more uses for these tools. Outsiders began petitioning the company to manipulate speech as well: first a little, then more often, then constantly,” Taibbi wrote on Friday. “By 2020, requests from connected actors to delete tweets were routine. One executive would write to another: ‘More to review from the Biden team.’ The reply would come back: ‘Handled.'”

Inside the Race to Get PFAS Chemicals Out of Raincoats