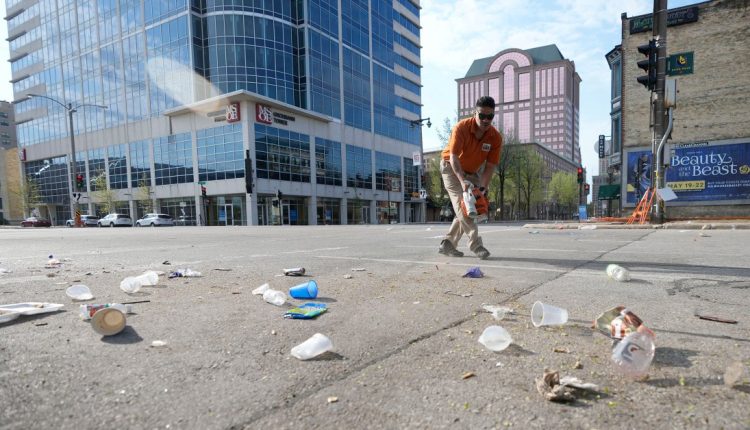 Milwaukee’s first shooting over the last weekend in September was on a Friday afternoon around 12:30 p.m. when 24-year-old Jameal Lee-Verlin was working at a tire shop on the north side of the city when a man walked into the shop and started firing. He had been on the phone with his cousin, Daja Lee-Bolton, before the shooting, discussing an online threat he had received. “The message was basically saying he was going to put 100 shots in them,” Lee-Bolton told Fox6.

Then, in the early hours of Saturday morning, 31-year-old Joanna Jovan Morrison was shot and killed. Over the rest of the weekend, four more people were killed in the city of 590,000, all of them in shootings.

Police and local activists say these kinds of violent weekends have become more common in Wisconsin’s largest city. While homicides have begun to slowly decline from their pandemic highs in most major cities this year, Milwaukee is headed in the other direction. The city is experiencing the biggest increase in shootings in the country, according to a mid-year analysis of 24 large cities by the nonprofit Council on Criminal Justice.

There have been 173 homicides as of Oct. 3, according to the Milwaukee Police Department (MPD), putting the city on pace for a 20% increase compared to 2021. At the current rate, Milwaukee will shatter the record of 193 homicides that was set last year. A database created by the Milwaukee Journal Sentinel reports that 91% of homicides were the result of firearms; 82% of the victims are Black and 77% of them are men.

Though cities like New York and Chicago have had more murders so far this year and get more national media attention for crime, the homicide rate in Milwaukee is higher, at around 29 per 100,000 residents. New York’s homicide rate is around 4 per 100,000; Chicago’s is roughly 20. Before the pandemic crime surge, that would have put the city among the deadliest in America. However, with multiple cities, including Philadelphia; Columbus, Ohio; and Austin, hitting record highs in 2021, it’s unclear where the city now ranks. One thing is certain: something is happening in Milwaukee that all American cities could benefit from understanding.

“We’re definitely headed in the wrong direction. We take it very seriously,” Milwaukee police Assistant Chief Paul Formolo tells TIME. “We started seeing this rapid increase right around when COVID started and I think what we’re seeing now is some of the residuals from that.”

While community leaders and experts say that poverty, increased community tensions, and other common factors are driving the surge in violence, police and some community leaders on the ground are also pointing the finger at Wisconsin’s constitution, which restricts judges from increasing cash bail amounts for offenders based on their perceived threat to the community.

Violence is continuing to rise

Gun violence has remained consistently high in Milwaukee since the start of the COVID-19 pandemic. In 2019, there were 98 homicides in the city. The next year there were 190 and in 2021 there were 193. Like the rest of the country, Milwaukee was right in the mix of cities that saw a significant increase in shootings and homicides during the pandemic, and experts believe the effects of the pandemic continue today. The FBI reported a nearly 30% nationwide jump in homicides between 2019 and 202.

“I think COVID is still impacting people’s lives and because of that it’s definitely still impacting something like violence,” says Theodore Scott Lentz, a criminal justice and criminology professor at the University of Wisconsin-Milwaukee. “Whether or not there are restrictions, it’s still impacting a lot of communities, especially marginalized communities that are already behind in keeping up with a pandemic.”

An analysis by the Milwaukee Homicide Review Commission, which was put together by professors at the Medical College of Wisconsin, shows that most homicides are occurring in neighborhoods where violent crime has traditionally been highest. The Franklin Heights and Park West neighborhoods—which are both north of downtown Milwaukee—are the focus of most of the violence. This means the shootings have become even more prevalent in high-crime areas.

“I think the structure of the streets are very unorganized right now,” says Rev. Marty Calderon, a community leader in Milwaukee. “We’ve had a really bad history of gangs and you see a lot of guys dying because of that, but now we’re seeing a lot of women and children being killed now. I’ve never seen that before.”

A debate over cash bail

Milwaukee police Assistant Chief Formolo and some community activists point to one factor that sets the city apart from other American metropolises: bail requirements, which are looser in Wisconsin than in many other states. “There’s an inability to incarcerate those who need to be incarcerated. I’m not talking about low-level offenders, I’m talking about people who are pointing and discharging firearms. People are being arrested and put back on the streets,” Formolo says.

Unlike in other states, cash bail in Wisconsin is generally not set with a focus on public safety issues. Instead, it’s designed to make sure the defendant has a financial incentive to be present at their next court hearing. Judges are barred by the state constitution from imposing cash bail for the reason of preventing future crimes.

Cash bail reform has become a significant issue for addressing inequalities in the criminal justice system. Especially since the 2020 murder of George Floyd, there have been major efforts in multiple cities to reform the bail system, and release more suspects awaiting trial who were previously held only because they couldn’t afford to pay bail. The cash bail system, in which people who are arrested have to pay money to be released from jail before their trial, has been viewed as discriminatory due to its impact on poor people, specifically people of color who have fewer resources and cannot afford bail.

As a result of the pandemic spike in violence, Milwaukee police began reviewing all of the homicides and nonfatal shootings that they believe could lead to retaliation. Formolo says police found that many of the people involved in these shootings are out on bail after being arrested for a separate serious crime.

There’s also a feeling among some on the ground that local politicians are not prosecuting crimes harshly enough as a result of a push for decarceration and not wanting to appear too tough on crime. “People are basically being arrested but then they’re being easily released on bail,” Calderon, the local Milwaukee reverend says. “I’m all for second chances but there needs to be accountability. We can’t let people break [the law] three or four times and each time you’re out on bail. That’s what’s going on.”

Last December, Republican state lawmakers proposed a constitutional amendment that would let judges make bail decisions based on a defendant’s criminal past, their perceived likelihood to re-offend, and the seriousness of the charges. The amendment was passed in the State Assembly by a vote of 70-21, with every Republican present and 13 Democrats—about one-third of the caucus—supporting it. The amendment was then passed in the Senate by a 20-13 vote.

For it to take effect, the amendment will need to pass consecutive legislative sessions and a statewide vote, which can’t happen until 2023 at the earliest.

Milwaukee Mayor Cavalier Johnson, a Democrat who was elected in 2021, appears hesitant to blame bail reform for the uptick in violence. “The mayor is avoiding the process of looking for villains and chastising the courts or the prosecutor’s office,” Jeff Flemings, the mayor’s director of communications, says. “That is not helping us solve the problem. Maybe we need to make changes in how we handle people awaiting trial but if the goal is to find a villain then we are not going to participate in that.”

A problem bigger than bail

There is a strong correlation between high rates of gun violence and crime and factors like poverty, affordable housing, and access to healthcare and social services. All of those play a role in what’s happening in Milwaukee. There is plenty of research that shows when those factors are improved—along with the implementation of community-led organizations—crime and gun violence go down.

“We know from research that most people [arrested] return to the community. Even if they are arrested, charged and convicted they’re likely going back to that same community,” Lentz, the professor at the University of Wisconsin-Milwaukee says. “We’ve known that when we do just get tough on people it doesn’t lead to better results.”

Though homicides are likely on their way to another record year, other crimes in the city are down. Rape, robberies, aggravated assault, burglaries, theft and motor vehicle thefts are all down at least 8%. Even non-fatal shootings are down 1%. “We just have this aberration with the homicides,” Formolo says.

While lawmakers in Wisconsin are making bail reform a top priority for addressing public safety, most criminal justice experts say there’s no real evidence supporting the idea that bail reform is a reason for the pandemic-era surge in murders.

So what is the driving factor? Most agree there isn’t just one.

What’s happening in Milwaukee is more likely a combination of factors including poverty, easy access to weapons, and a lack of collaboration between law enforcement and the community.

Most criminal justice experts say that making bail restrictions tougher is not likely to reduce violence. Real solutions, they say, must be comprehensive and include addressing the systemic issues in the communities where violence is most prevalent—while also making sure that law enforcement and community-led programs play a role.

“The problem is multi-dimensional and in terms of responding to this we need to think more broadly about, beyond just what the police can do and look at what the rest of the community can do as well,” Lentz says.