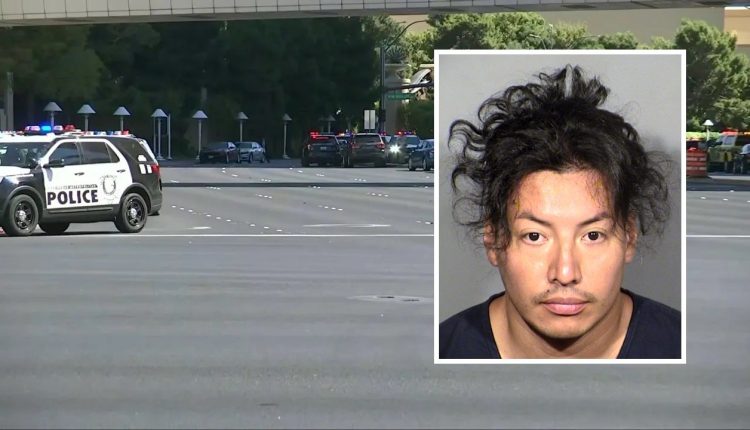 The suspect believed to have carried out a deadly stabbing rampage in Las Vegas was arrested Thursday night hours after the attack, according to the Las Vegas Police Department.

Yoni Barrios, 32, was taken into custody and booked into the Clark County Detention Center on two counts of open murder with a deadly weapon after police said he stabbed eight people on Las Vegas Boulevard Thursday morning.

He was also charged with six counts of attempted murder with a deadly weapon.

Yoni Barrios, 32, was taken into custody after police say he fatally stabbed two people and injured six others on Oct. 6, 2022.

“This was an isolated incident,” Deputy Chief James LaRochelle said in a statement. “All evidence indicates Barrios acted alone and there are no outstanding suspects at this time.”

The Las Vegas Metropolitan Police Department said the rampage started at approximately 11:42 a.m. they received reports of multiple victims having been stabbed in front of a casino on South Las Vegas Boulevard.

The initial stabbing appeared to be “unprovoked” on a sidewalk, LaRochelle said.

First responders were called Thursday to the scene on the Las Vegas Strip where 2 were stabbed to death and 6 are injured.
(Fox 5 Las Vegas)

“Currently, three of them are in critical condition and the others are stable,” the LVMPD added.

Investigators recovered a large kitchen knife they believe was the weapon used in the stabbings.

Police are continuing to investigate the incident and have gathered statements from “scores of witnesses,” LaRochelle said.

General views of the Wynn hotel and casino on June 27, 2021 in Las Vegas, Nevada.
(AaronP/Bauer-Griffin/GC Images)

No motive is known at this time.

Authorities have urged people avoid the area directly outside the Wynn Hotel.