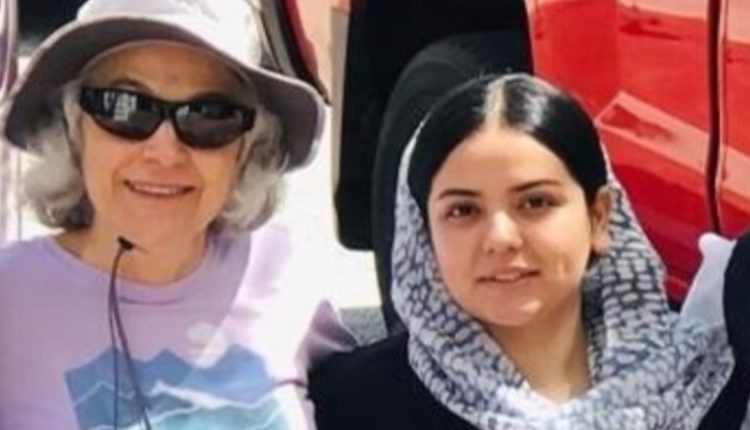 The 65-year-old Harrisburg, Pennsylvania, resident helped resettle an Afghan refugee family of eight, and because this is their first holiday in the United States, Samkoff invited them to her father and sister’s home for Thanksgiving.

“Because they have a larger dining room table and more dining chairs than I have,” she said, adding, “Our meal is not completely traditional in that we’re vegetarians.”

In different homes around the U.S., Jewish volunteers who helped resettle Afghans are welcoming them for their first Thanksgiving dinner on U.S. soil.

One of Samkoff’s guests is Hadia, a 24-year-old Afghan refugee whose family fled Afghanistan in November 2021.

“We got a call and they said we had to go to the airport right away,” Hadia said of her family’s escape from Kabul. Because of security and safety concerns, VOA is sharing only her first name.

In Afghanistan, Hadia had a bachelor’s degree in public administration from Balkh Province. She also volunteered to help displaced people from other countries.

When Kabul fell to the Taliban, her family had to quickly make plans.

The U.S. completed its withdrawal in August 2021 and helped evacuate more than 130,000 Afghans in a chaotic few weeks after nearly 20 years of war.

“We decided to leave our country because my father had a military background,” she said.

Hadia’s father served in the Afghan army and worked directly with U.S. forces.

She did not disclose who helped her family leave Afghanistan, but they were part of a group of people who were able to go to Abu Dhabi, the capital of the United Arab Emirates.

They lived there for four months before receiving authorization to travel to the United States in March 2022.

Pennsylvania was the place the U.S. government chose for the family to rebuild their lives.

That is where Samkoff and the other volunteers come in. They help recently arrived Afghans like Hadia and her family settle in and give them the resources they need to be successful in their new homeland.

Samkoff said she became a volunteer after talking to a friend who was helping to resettle another Afghan family.

Samkoff is one of 1,866 volunteers in the Jewish Federations of North America network, which in partnership with the Shapiro Foundation launched a $1 million refugee resettlement initiative to support local communities around the country, including the Jewish Family Service of Greater Harrisburg (JFS).

The network has resettled 19,163 Afghans across the country and is prepared to resettle more as they arrive.

“A lot of it is really goodwill. … Our model allows each community to respond in a way that makes the most sense to them. … I’ve been really proud of [the] engagement we’ve seen in communities,” Hirsh said.

Hirsh said volunteers help find apartments and homes for Afghans. They also work together to furnish the new place, help them enroll children in school, find transportation to job interviews and teach them English.

“The support services we have at the agencies will help any Afghan that walks through the doors, but we’re working very closely in coalition with many of the resettlement agencies … to pass the Afghan Adjustment Act that would not only help adjust status but provide an easier pathway for those that are remaining in Afghanistan,” she said.

The Afghan Adjustment Act is bipartisan legislation that would allow eligible Afghans to apply for lawful permanent residence in the United States. It was introduced in both chambers of Congress in August.

“So we’re hoping that bill will be attached to legislation that passes Congress by December,” Hirsh said.

At the table, the family and friends had Tofurky, a plant-based, meat substitute made from tofu.

Hadia said she tried to explain to her mother what the national holiday day means to the United States.

“It’s like they meet [and] appreciate people with thanks. … So it’s really good. In our culture [it’s] also like that. We don’t have any specific date to say thanks but we say thanks [to] everyone,” she said.

Hadia said she looks forward to the future and hopes to one day work as a diplomat helping other refugees to find safety as she has. In Harrisburg, she is working as a social service worker and is volunteering to assist other refugee families.

She told VOA her family is still adjusting to the new country.

“The United States is very busy. … Everyone is busy here. … [But] we have lots of opportunities here. During the morning I can work and during the evening I can take my classes,” she said.

“I don’t have any grandchildren of my own. I feel like if anybody asks me if I have any grandchildren, I would say, ‘Yes, I have seven. One of them is in Germany. I haven’t met him in person yet, but he’s coming,” Samkoff told VOA. That is Hadia’s brother, who is waiting to resettle in the U.S.

“My family is always excited when Judith (Samkoff) invites us [to come over] or other volunteers. You know, when we came here, we didn’t have any family. Now they’re my family. I call Judith my grandmother,” Hadia said.

Biden Touts Economic Gains, Pleads for Unity in State of the Union Address

Biden Cites US Resolve in Facing Aggression from Russia and China

A woman was recovered alive after 52…

The rise of CPES, selective training…