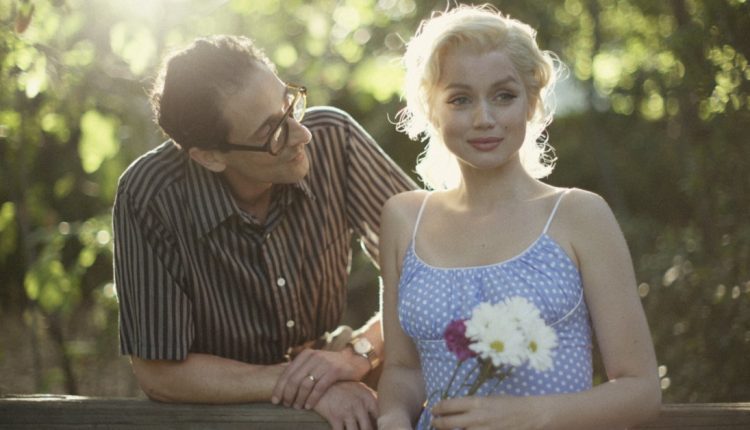 During her lifetime, but perhaps even more significantly in the sixty years since she died, Marilyn Monroe‘s presence has loomed large in our collective imaginations, providing endless inspiration for film, television, books, music, and art. This fall, Monroe is once again at the center of cultural conversation with the Sept. 28 release of Blonde.

Written and directed by Andrew Dominik, based on the 2000 Pulitzer Prize-shortlisted novel of the same name by Joyce Carol Oates, the film stars Ana de Armas as Marilyn and uses Monroe’s life as an inspiration to delve into the mystery and fantasy that surrounds one of the world’s most famous women. While Blonde takes inspiration from real events, figures, and long-held rumors from the actor’s life as a jumping point to imagine what Monroe may have thought and felt, the film is by no means a biopic. Like Oates’ book, it’s a definite work of fiction, dabbling in the experimental and including fantastical elements.

Her childhood and her mother’s mental health issues

In the film, Marilyn, or Norma Jeane, as she was known in her childhood, is growing up in Los Angeles. Her earliest memories are of her mother telling her about her absentee father, while showing her a picture of Clark Gable. Her mother, a heavy drinker fixated on being abandoned by Marilyn’s father, shows signs of mental instability, including being physically abusive to her daughter, attempting to drive into the flames of the 1933 Griffith Park fire, and trying to drown Marilyn in a scalding hot bath. Following one of her mother’s episodes, neighbors intervene and Norma Jeane is put into foster care, entering an orphanage while her mother is committed to a mental institution.

Monroe’s actual childhood was as turbulent and tragic as what is shown in Blonde. Her mother, Gladys Pearl Baker, a film cutter at RKO Pictures, became pregnant with her after having an affair with her work superior, Charles Stanley Gifford. Born as Norma Jeane Baker in 1926, Monroe never met her father and lived with her mother until Gladys had a mental breakdown in 1934 and was diagnosed with paranoid schizophrenia. Gladys was committed to a mental institution and would remain in various hospitals for the rest of her life. Following her mother’s commitment, Monroe stayed with family friends and was later made a ward of the state and placed in various orphanages and foster homes, until she married James Dougherty in 1942 at the age of 16, to avoid having to return to the orphanage.

Read More: We Should Talk More About What a Brilliant Actor Marilyn Monroe Was

Among the more fantastic liberties Blonde takes with Marilyn’s life is the throuple relationship she embarks on with Charlie “Cass” Chaplin Jr. and Edward “Eddy” G. Robinson Jr. Their threesome, which they dub “the Geminis” becomes the scandalous talk of the town, with Marilyn’s talent agent urging her to end it to try and curb bad press. A pregnancy that ends in an abortion brings the end of “the Geminis’” relationship. In reality, there’s no no evidence that Monroe was in a throuple or that the relationship was ever a subject of Hollywood gossip, although a brief affair between Monroe and Chaplin was the subject of rumors at the time and was later confirmed by him in his 1960 autobiography.

Her marriage to Joe DiMaggio

Blonde follows the rise and fall of many of Monroe’s relationship and marriages. In the film, she meets and falls in love with “The Ex-Athlete,” a character based on the baseball star and Monroe’s ex-husband Joe DiMaggio. Their romance starts with a mutual desire for marriage, children, and a quiet life outside of the spotlight. After they marry, however, some disparities between their hopes for the future arise: The Ex-Athlete doesn’t share her interest in poetry or fine art and on visits to his family’s home, Marilyn is gently mocked for her lack of homemaking skills. The real fissures in their marriage arise from his volatile jealousy and domestic violence, including a traumatizing scene in which he beats Marilyn with a belt after watching her film her famous subway grate scene for The Seven Year Itch.

In real life, DiMaggio’s jealousy and violent behavior led to the end of his marriage to Monroe. The couple wed in 1954 after two years of dating and began experiencing marital problems almost immediately, with the marriage lasting only nine months. Conflict began during their honeymoon, when the couple traveled to Japan for DiMaggio’s promotional baseball tour. On the trip, Monroe was asked to perform for American troops in Korea, much to DiMaggio’s consternation. DiMaggio was also controlling when it came to Monroe’s career: he wanted her to stop taking “dumb blonde” roles and avoid the sexualized public persona that had made her famous, and eventually become a full-time stay-at-home wife. It was clear that the newly retired baseball great did not enjoy being eclipsed by his wife, whose star was undeniably on the rise and there were multiple allegations, including ones made by his son, that DiMaggio was physically abusive to Monroe. Like in the film, the final straw for their marriage was the filming of The Seven Year Itch; according to photographer George S. Zimbel, who was on set photographing the scene, DiMaggio stormed off the New York City set in a fury after watching the crowd go wild for Marilyn’s skirt billowing up above the subway grate. A violent fight was reported at their hotel that night and Monroe filed for divorce when she returned to California after the shoot, citing “mental cruelty.”

Her marriage to Arthur Miller

In Blonde, one of the happiest and most idyllic periods of Marilyn’s life is during her romance and eventual marriage to “The Playwright,” a character based on Arthur Miller. In the film, they meet in 1955 when she auditions to perform in one of his plays, while living in New York and attending the Actors’ Studio; the duo bond over a shared love of Anton Chekov’s The Three Sisters, with Miller being surprised and impressed by Marilyn’s intelligence and insight. A whirlwind courtship, marriage, and a relocation to the suburbs bring both wedded bliss, especially after Marilyn discovers she’s pregnant, but after a devastating miscarriage and the discovery that he’s been using her as inspiration for her material, Marilyn turns to drinking and drugs to dull her pain, causing a strain on the marriage.

This period in her life in the film is fairly accurate to Monroe’s actual time married to Miller. The pair met on the set of As Young As You Feel in 1951, while Monroe was casually dating Miller’s friend, Elia Kazan. They corresponded via letter for a few years, then reconnected after Monroe moved to New York in 1955 to attend the Actors Studio, beginning an affair that led to Miller establishing residency in Nevada so he could divorce his first wife and marry Monroe. Though their partnership was considered surprising to some, it was deeply devoted. When Miller applied for a passport to go to London with Monroe for a shoot, it triggered an investigation about his alleged ties to communism, opening both him and Monroe to scrutiny and surveillance, with Monroe supporting him publicly, despite the possible ramifications for her career. When the couple wed in 1956, Monroe converted to Judaism. Their five years of marriage started out with immense happiness, with Monroe even declaring “this is the first time I’ve been really in love,” but she later felt betrayed after reading some of Miller’s less than flattering observations of her in one of his notebooks. Multiple miscarriages added a strain and led to Monroe abusing alcohol and pills, which contributed to the eventual end of their marriage.

Her alleged pregnancies and miscarriages

Marilyn is haunted by the memories of her unborn children in Blonde, with the film suggesting that she had an abortion out of fear that her mother’s mental illness was hereditary, while two other pregnancies resulted in miscarriages. There’s no evidence that Monroe ever had an abortion; she had three miscarriages during her marriage to Arthur Miller, which was devastating to her as she wanted to become a mother.

One of the most horrific scenes in Blonde occurs when Marilyn is flown out to visit “The President,” who’s recuperating from back surgery. After being unceremoniously dragged through the halls of a hotel by Secret Service agents, she’s shown to the politician in a manner that she likens to “meat to be delivered.” She asks The President, who’s on a phone call while watching a rocket launch, how she can help, and he coerces her into giving him a hand job and oral sex, before the scene ends with him raping her. While this highly stylized and fictional scenario is meant to highlight how Marilyn was exploited, it draws on longtime real speculation over Monroe’s relationship with President John F. Kennedy.

Rumors began after Monroe sang a sultry rendition of “Happy Birthday” to JFK at Madison Square Garden in 1962, just months before her death, while wearing the notorious sparkling and skintight nude gown that Kim Kardashian would controversially sport on the Met Gala carpet fifty years later. But according to biographer James Spada, who wrote Marilyn, it’s likely that the actor was involved with both JFK and his brother Robert “Bobby” Kennedy. In an interview with People, Spada said “it was pretty clear that Marilyn had had sexual relations with both Bobby and Jack.” Conspiracy theories abound suggesting that Monroe’s probable suicide was actually a cover-up for a more nefarious cause of death to prevent the affairs with the Kennedys from coming to light. There’s, of course, no way to prove them, but the mystery surrounding Monroe’s death has long been a point of fascination, spawning books, and even a documentary.

Who are Whitey and Mr. Shinn?

In Blonde, two of the more consistent characters in Marilyn’s life are her makeup artist Whitey and her talent agent, Mr. Shinn. Whitey is present for many of Marilyn’s most vulnerable moments in the film, constantly helping her transform from Norma Jeane to her glamorous Marilyn Monroe persona. Unlike many of the other men depicted in the film, he’s one of the few people in her life who’s not using her or seeking to take something from her. In reality, Allan “Whitey” Snyder was a consistent presence in Marilyn’s life; he worked with her from her first screen test at Twentieth Century Fox until her final days. Monroe had even asked him that if she died before him, to do her makeup for the funeral, which he agreed to, fulfilling his promise to her after her death in 1962 and even serving as a pallbearer at her funeral.

On the other hand, the fictional Mr. Shinn in the film, is a pivotal figure in Marilyn’s early career, sending her on casting calls and carefully managing her public persona and press. While Marilyn is grateful for his guidance, looking at him somewhat as a father figure, he makes advances towards her at a movie premiere and seeks to control her personal life. The character is most likely based on Monroe’s real-life talent agent, William Morris Agency vice president, Johnny Hyde. Hyde discovered Marilyn in 1949 at the Palm Springs Racquet Club where she was doing a photo shoot; he quickly signed her on as a client and helped her to land her first roles in Hollywood, eventually securing her a contract with Twentieth Century Fox, just days before his death in 1950. According to biographer Donald Spoto in Marilyn Monroe: The Biography, Hyde was deeply in love with his client, going so far as to leave his wife at the time for her and proposing marriage multiple times.