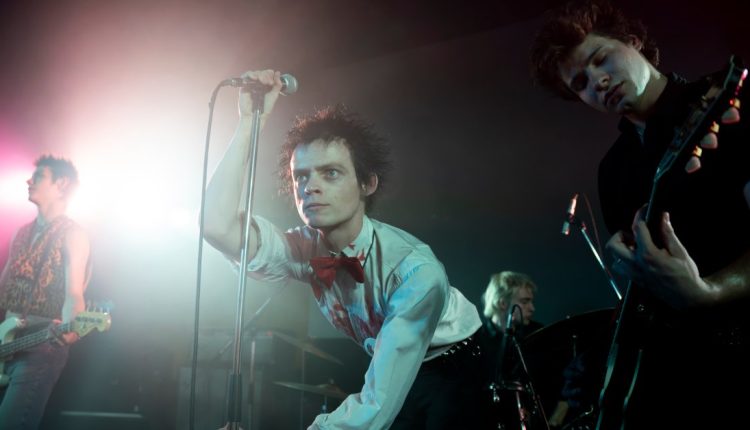 To young, working-class people in 1970s Britain, it felt like the world was ending. Beaten down by a global recession, spiking inflation, and a backlash to ’60s progressivism that would soon lead to 18 years of Conservative rule in their country, many justifiably feared they could look forward to nothing more than a lifelong struggle for survival. In other words, as Johnny Rotten taunted in the Sex Pistols’ Silver-Jubilee-hijacking 1977 single “God Save the Queen”: no future.

This bleak outlook would surely resonate with kids coming of age now, as punk’s apocalyptic imagery bleeds into a reality warped by climate change, gun violence, and COVID-19. Which is reason enough for TV’s Great Docudrama Boom of 2022 to revisit the Sex Pistols, as director Danny Boyle has done in FX’s Pistol. Streaming May 31, exclusively on the network’s Hulu hub, the six-part series traces the brief rise and rapid combustion of a band that only released one studio album but permanently altered music, media, and youth culture. It’s a genuine but uneven effort, with some strong acting and character development counteracting the awkwardness inherent in any on-screen depiction of the songwriting and image creation process. What makes Pistol a disappointment, ultimately, is the way its narrative remains hermetically sealed in ’70s Britain despite so many opportunities to draw parallels to the global cataclysms of today.

Based on co-founder, guitarist, and would-be frontman Steve Jones’ memoir Lonely Boy: Tales From a Sex Pistol, the show opens with a heist. Teenage Steve (Toby Wallace) plunders a lipstick-smeared microphone and sundry other gear from the legendary 1973 gig where David Bowie killed off his Ziggy Stardust persona, then races the cops through nighttime London. As his future manager Malcolm McLaren (played with impish flamboyance by The Queen’s Gambit standout Thomas Brodie-Sangster) immediately realizes, Jonesy—irreparably damaged by an indifferent school system, a punitive state, and a broken home—is the perfect avatar for his cohort. “I’m creating a revolution,” announces Malcolm, a self-styled impresario about a decade Steve’s senior who operates a fetish-themed boutique called SEX with his fashion-designer wife, Vivienne Westwood (Talulah Riley). “I don’t want musicians, I want saboteurs!”

And that’s precisely what he gets, after Steve chokes onstage and Malcolm recruits a different singer. John Lydon, rechristened Rotten for the sorry state of his teeth, is played by Anson Boon (The Defeated) as a grim, cranky, twitchy but brilliant kid with his heart in the right place and an Irish outsider’s keen understanding of the UK’s various political hypocrisies. His power struggles with Steve and to an even greater extent Malcolm, a middle-class ideologue who spouts leftist revolutionary theory yet wants to keep the Pistols under his thumb, become the central conflict. (The show’s chronological structure comes as a relief, now that so many dramas insist on needlessly messing around with multiple timelines. But it also means that John doesn’t enter the mix until episode 2, which makes for a relatively weak premiere.)

If Jonesy is punk’s wounded heart and John its exacting brain, then Sid Vicious (Louis Partridge) is its ravenous, masochistic, infantile id. A late-in-the-game replacement for terminally normal, musically accomplished bassist Glen Matlock (Christian Lees), Sid is not only a non-musician, but also comes off as utterly incapable of learning to be one. But he looks great onstage, snarling vacantly and later cutting into his own flesh until blood drips down his bare torso. A walking death drive in Doc Martens, he forms a codependent relationship with New York expat Nancy Spungen (Emma Appleton) and the heroin she imports from that scene.

Pistol treats Nancy’s notorious death at the Hotel Chelsea in October 1978, months after the Pistols’ onstage implosion and allegedly at the hands of Sid, with essentially the same woozy, druggy ambiguity as the 1986 biopic Sid & Nancy. But without resorting to one of those female redemption plots that have become a docudrama trope, Boyle and writer Craig Pearce show her more empathy than many male storytellers have in the past. She comes off as an annoying, destructive, manipulative person, but one who was in no less pain than any of punk’s lost boys.

The show certainly expends more effort than most dramatizations of UK punk on giving the girls and women involved their due. Beyond Nancy and Vivienne, who’s rightly portrayed as the real visionary in her marriage, we meet real-life SEX stalwarts Jordan (Game of Thrones’ Maisie Williams, who sparkles in one episode’s glorious cold open but is otherwise underutilized) and Helen of Troy (Francesca Mills). As the talented, self-possessed Chrissie Hynde, who really did work at the store in the mid-’70s, Sydney Chandler gives Steve both a love interest he’ll never deserve and a musical mentor whose skill he’ll never match. And in the series’ only legitimately bold episode, themed around the Pistols’ much-debated “Bodies,” Bianca Stephens humanizes the track’s protagonist Pauline, a mentally ill woman who “just had an abortion.” More than a statement on reproductive rights, which would’ve been ill-suited to the story, the episode—and the series more generally—captures how outcasts of all varieties found a home in punk.

What Pearce gets right, from the perspective of storytelling if not always history, is the characters. The Pistols and their satellites were unique people, with a complex web of relationships, aims, backgrounds and ideologies. Contrasts between Malcolm and Vivienne’s art-school ideals and the band’s working-class rage, or between John’s supportive parents and Steve’s terrible ones, are sharply drawn. And Pearce makes a genuine attempt to explore the political and social underpinnings of punk; Pistol isn’t just youthsploitation. Boyle contributes the same gritty-dreamy aesthetic he brought to Trainspotting, plus the affinity for incorporating musical elements and flair for capturing people in motion that defines his films. While most of the performances are solid, Boon’s Johnny Rotten alone is reason enough to watch.

The dialogue can be clunky, as though lifted from a third-rate Pistols biography or ripped from any other on-screen fictionalization of a famous band’s formation. There’s too much starting of things better left suggested, from the meaning of song lyrics to Vivienne’s resolution to “turn the male gaze back on itself.” At the same time, esoteric, punk-adjacent concepts (or concepts that have become esoteric over the past half-century) like Situationism are mentioned without being contextualized. The final episode suffers from a wicked case of Wikipedia syndrome, jumping from one infamous incident to the next without offering much in the way of synthesis.

Maisie Williams as Jordan in ‘Pistol’

Like too many docudramas, Pistol doesn’t seem to know what it’s trying to say, or why. Just because a story is true, or largely true, doesn’t necessarily mean it’s worth adapting as fiction—especially when its subjects are a band and a movement that have already been profiled and analyzed so extensively. Many of the real spectacles recreated here have long been available to watch in Julien Temple’s films The Great Rock ‘n’ Roll Swindle and The Filth and the Fury or other punk docs, if not on YouTube. Sid and Nancy have, by now, been a cultural meme for longer than their cumulative lifespans. Just about everyone else, from Lydon to Jordan, has published their memoirs. And to the extent that Pearce has a take on the Pistols—that Lydon was the real hero and McLaren the villain—it isn’t exactly a novel one.

This isn’t an easy story to tell. The Sex Pistols only existed for a few years; Steve was functionally illiterate at the time, and Sid was certainly no prize pupil. Yet, in part because they mainstreamed McLaren and Westwood’s incendiary theory as well as Lydon’s DIY radicalism, the band has inspired some of the wildest, most ambitious, and voluminous books of cultural criticism ever written, from Greil Marcus’ Lipstick Traces to England’s Dreaming by Jon Savage. More importantly, they changed the way many young people actually thought and lived and navigated an era of desperation and despair. In neglecting to trace their legacy into the apocalyptic present, Pistol delivers little more than a competent reenactment.

Support for red flag laws turns to opposition when voters told about how they work:…