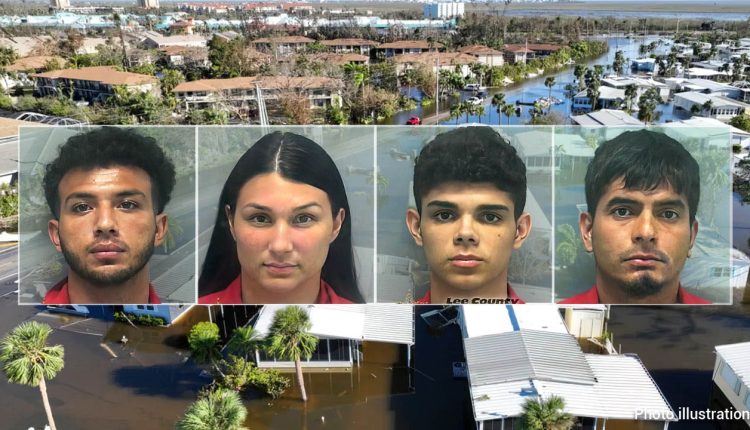 Florida sheriff’s deputies arrested four suspected burglars who allegedly looted in the wake of Hurricane Ian, while many impacted Floridians struggle to recover from the Category 4 storm.

Omar Mejia Ortiz, 33, and Valerie Celeste Salcedo Mena, 26, were arrested, along with 20-year-olds Brandon Mauricio Araya and Steve Eduardo Sanchez Araya. Lee County sheriff’s deputies arrested all four on charges of burglary of an unoccupied structure during a state of emergency, according to online jail records.

Ortiz was also charged with petit larceny, while the other three suspects were charged with grand larceny. It is unclear exactly when and where the burglaries took place.

All four suspected looters were released from jail after posting bond.

The arrests came after Lee County issued a strict curfew and “zero-tolerance” policy for looting. The southwest Florida county was devastated by Hurricane Ian, prompting officials to issue warnings after burglars were spotted ransacking homes in Fort Myers.

“When law enforcement was unable to respond because of weather conditions, there was a break-in on Cleveland Avenue River,” Lee County Manager Roger Dejarlais said in a press conference last week.

“Florida is a law and order state,” the Republican governor tweeted the following day. “Looting and lawlessness will not be tolerated.”

Florida is still recovering from the billions of dollars worth of damage from the storm. Rivers in the Sunshine State are still rising, meaning even more flooding and damage could be on the horizon.

At least 97 fatalities have been confirmed in Florida due to Hurricane Ian.